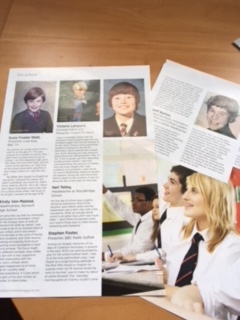 Back to School Memories

As the school run begins again and the children’s long summer holiday is a fading memory, it is a good time to look back on our own school days.

Before I started school my grandfather would tell me how he would cross the road from my grandparent’s council flat, to talk to me through the fence at playtime. Sadly, he died a few months before I started at Hillside Primary School in Ipswich.

Of my first day at Tower Ramparts Secondary Modern School, I remember most the adventure of walking to school with my best friend Janet, from the suburbs to Ipswich town centre. There we sat, terrified, on the floor of the school hall as the classes to which we’d been assigned were read out. Oh, the relief to discover that Janet and I were in the same form (and we are still friends fifty years later!)

Let us hear what other people from Suffolk and Norfolk can remember of their schooldays ….

My parents ran a prep school which I went to at the age of 7. This was unusual on a number of counts: first, I didn’t have to leave home to go to school – my first classroom was just a few steps from our front door; second, I knew all the teachers, as I had lived at the school since birth; and third, it was a boys’ school, so I was the only girl!

My father also taught me English at one point. I enjoyed his classes, but didn’t contribute very much as I didn’t know what to call him. All in all, I had a very happy time there, and it was a bit of a culture shock when I left to go to my all girls’ convent at the age of 10!

'Back to School' has always been a phrase provoking extreme mixed emotions in me. As a child, it would feel so unfair that right in the blissful stillness of my school holidays, those wretched ‘Back to School’ signs would begin to fill M&S windows. It seemed plain wrong – an unwanted intrusion into our private time. It led to the inevitable experience of traipsing around shops, then spotting other embarrassed teenagers being fitted out by their parents. Next would come the early September butterflies, the anticipation, the nerves blurring into excitement. And then, suddenly, we were back – and, always, just always, the bright optimism of the new school year would begin, meeting new teachers, meeting new classmates, sensing we were growing up. ‘Back to School’ and its associated emotions is something I wouldn’t give up for the world.

I can genuinely say that my memories of going back to secondary school after the holidays were all ones of excitement for what lay ahead. I was fortunate to be on an assisted place at a music school, and it was always good to be back in the cycle of having excellent academic and violin lessons, discovering and playing more music and pushing more boundaries in what one could achieve. This focus might have in different contexts been rather intense, but with a very supportive and genial relationship with the teachers, and a climate which encouraged independence of mind, this made for a pretty ideal educational experience. It is one which I want the girls of my own school, as far as possible, to share today.

I began secondary school with the obligatory massive sports bag that was probably bigger than me but seemed to be the 'done' thing to carry everything I needed including my new P.E kit.  Secondary school seemed like a whole new world, learning your way around a big building and calling teachers 'Miss' or 'Sir.'  It felt so grown up! From attending a small primary school, I was a bit overwhelmed by the amount of children from the local villages that I was suddenly surrounded by. I soon found my love of Wednesday afternoon double art sessions.  Going out onto the school field to sketch in the sunshine. It was my favourite day of the week for that year.

My first day of school was a slightly terrifying experience. Most of the teachers were elderly ladies and the headmaster was a stern man with a thin moustache. What we actually did at school is all rather hazy until I was much older – I don’t think my teachers tried very hard in those days to make lessons interesting and engaging!

Among my fondest memories of my days at Copleston Secondary in Ipswich in the early 1970s was getting picked to play for the school football team. I was 12 at the time and football crazy. I saw myself as a tough tackling defender in the Mick Mills mould so imagine my surprise when my PE teacher broke the news to me that I was to make my debut at centre forward! That  Saturday morning game at Chantry couldn’t come round quick enough. Before I joined my new team-mates I had my paper round to do. I got up a bit earlier than usual but little did I know I’d soon be visiting hospital for a tetanus vaccination after being bitten by a dog which must have mistaken me for the postman. A and E waiting times were nowhere near as long in those days so I made the kick off albeit with a few minutes to spare. I really needn’t have bothered. I made absolutely no impact up front and was promptly dropped for the next game. To this very day I still blame the dog!

Nigel Youngman, Headteacher at Beccles Free School: I was incredibly fortunate to have two tremendous English teachers at school; Gareth Calway and Mary Tebay. My memory is from Kings Lynn in the late 80s when the novelist Candia McWilliam came to speak to us. Mary asked me to give the vote of thanks to this stylish, sophisticated, intellectual woman. I would be surprised if I took breath or paused at any point – my speech was, in short, hopeless but that didn’t matter. My teacher had asked me to speak to a professional writer on behalf of the school. That was it. I felt valued.

So, to the schoolchildren of Suffolk and Norfolk, we pass our best wishes and remember, we have all been through it too!