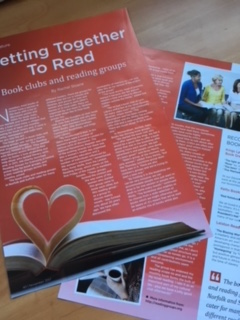 Getting Together to Read – book clubs and reading groups

Nowadays, most books of fiction have a section at the back with a list of discussion points and notes for book clubs. Across Norfolk and Suffolk there is hardly a town (and many a village) that doesn't have at least one monthly meeting for book-lovers and, if none is nearby, newspapers and radio have also got into the act.

The huge growth in book clubs and reading groups was led by a charity that promotes literacy. The Reading Agency, formed in 2002. They worked with libraries across Britain to find ways to foster a love of reading and help those who lacked literacy skills and, in 2011, the charity launched Reading Groups for Everyone, a central online base for book groups, and 2,500 reading groups across the country, joined.

The book clubs and reading groups in Norfolk and Suffolk cater for many different readers. There are groups for children that are run in schools and libraries, and groups for men and women who meet in each other’s houses or in local cafes. Many are organized by, and meet in, libraries but book shops like to host book groups too.

Sharing the thoughts on their book club, how they started and why they attend, were members from Leiston, Ketts Books, (the Wymondham Community Bookshop), and Kings Lynn Library:

“My recollection is that, in the 1980s there were a number of women's groups formed in Leiston for various sorts of discussion. The National Housewives Register was one of the existing strands but there was also a women's health day organised by community education and a number of individuals influenced by the women's movement,” remembered Mary Anne Wolfe, from the Leiston Reading Group, which meets on the first Friday of the month, in members houses.  “These groups formed the context and the way some of the women who started this group came to know each other, but this reading group – as a group to discuss mainly novels – was formed only about 20 years ago. We have often discussed the unreliability of memory so I can only offer this as my version of the origins of the group!”

“The local doctor, head of practice, started it because she felt women needed a time and place to discuss matters outside the home”, added Sue Liddle.

“We’ve had a book club at Lynn Library and a few at my other libraries for many years now!” said community librarian, Alison Horne. “The Dersingham one has been running since 2000 and the library has a crime-only club and a read-anything one. There are round about 15-20 in each one.”

“We started the book club very soon after opening the shop. We felt it would be a good idea to offer a book group that met in the bookshop after closing hours each month. We just advertised it and people came along. It's been great!” said Nicky Morris.

“Nikki's group, at the moment, has only women,” added Tracy Kenny, “but the Thursday lunchtime group does have men in it. There are also children's groups and we're trying to start a teen one.”

“By holding it in the bookshop we can be very inclusive: we can accommodate people who just want to drop in for one session or people who wish to come every month,” continued Nicky. “The bookshop also enables us to choose from a wide selection of books which we might otherwise not be aware of. It's meant that we've read an eclectic mix of books whilst also supporting the bookshop – many of us purchase our book group books from Ketts books.”

The universal idea is that everyone in the group reads the same book and then come together to discuss what they liked – and what they did not.

“We talk about the style, structure, themes, descriptions, atmospheres, characterisations of each book; and then how each has affected us as individual readers,” Sue Liddell, from Leiston Book Group, explained.

But who chooses the books that each group reads?

“Each month, the Norfolk library book groups have two ‘set’ books to try chosen by library staff or recommended by club members,” explained Alison “The groups were set up because people just love talking about books together – and most like the idea of being introduced to new things that they would have never tried had they not been part of the group. I sometimes give crime titles to the non-crime group and it works, but we also try biography, travel, fantasy, sci-fi things in the media, prize winners. We use titles in library stock, and can access anything that’s in paperback and at least 6 months old. After the ‘set’ book discussion, everyone is invited to share anything else they’ve enjoyed since the group last met.”

In Leiston they hold an annual meeting to which people bring two or three suggestions of books which they outlined in brief. The twelve chosen books for the year are picked from the suggestions.

Penny Hewett-Brown is a member of the Leiston Book Group,

‘I particularly enjoy the way we choose our books. I think it's important that when we each lay out two or three books as possible choices for the next 12 months, that the introducer should have read them. Sometimes books have come highly recommended by critics and we have found little to talk about after reading them. Critics are often part of the writers' pool where mutual back scratching occurs.”

“At Ketts, every couple of months we spend some time looking at the books available in the bookshop and choose books that we haven't read and appeal to all of us. We choose mostly fiction but sometimes we have a non-fiction and sometimes a teenage read. We just have one rule – that the book over Christmas is a short one!”

But if you can read a book of your own choice at any time, why go to a monthly reading group? Leiston members are focal in their praise of their group,

“A reading group can change the way one reads because one has to articulate and analyse one's response to the book, one reads books others have chosen and which one might not otherwise have read and it is a very good way to get to know people,” said Mary Anne.

“I think I'm one of the newest to the group,” admitted Christine Laschett. “I love our meetings. I always speak about how the book has affected me, as I don't really know about structure and form as far as novels go. It is a non-threatening environment and all contributions seem welcome.

The group has widened my reading scope no end and the monthly book forms the bulk of my novel reading. I rate it as an important part of my cultural life – plus we have a jolly good chat afterwards!”

“The light we cannot” by Anthony Doerr,

“The bees” by Laline Paull,

“The Martian” by  Andy Weir.

(At our December meetings we look bac at the years reads and remember our favourites. I can’t wait!)

We all loved it and went on to read all his others. It's now one of our shops bestsellers – we recommend it (and “The President's Hat” by the same author) to many of our customers.

“Homegoing” by Yao Gyasi – a moving but positive glimpse into past, present and future in Africa and America from the time of slavery