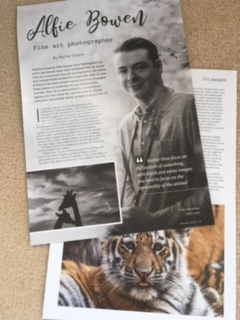 Anyone knowing Alfie Bowen from Worlingham ten years ago would never have imagined that he would now be a successful fine art photographer. His autism and mental health problems meant that, after he was bullied at his main-stream school and only managed three weeks at university, he was isolated and suicidal. Now he is represented by a prestigious agency, Da Vinci Fine Art, and his work is sold to collectors around the world, as well as across the UK.

It was discovering a love of photography, and combining it with his affinity with animals, that has changed his life. He posted his beautiful closeup wildlife images onto Instagram, was spotted by the agency and Alfie’s work is now displayed in galleries, a glossy coffee table book is planned, and his framed photographs sell for between £1,000 and £2,000 each.

“I’ve had an obsession with animals ever since I was a toddler. My first word was mallard! I started taking photos when I was being bullied and it was my escape from reality. I began by using my mum’s old compact camera, then I had a bridge camera for Christmas and, two years ago, I got a Nikon DSLR, which I use now.”

His black and white images are, he says, an extension of this escape from reality.

“Rather than focus on the picture of something, with black and white images you tend to focus on the personality of the animal. A camera is only a tool really, in the same way that a paintbrush is the painter’s tool, it is all about how you see and interpret things.”

Incredibly, Alfie was told by one of his high school teachers that he would never pass a GCSE, but, after attending Centre Academy East Anglia, a specialist school in Brettenham, Suffolk, he passed six GCSE’s at C to A grade, took seven American diploma subjects (which is of A level standard but course-work based) and gained A and A-starred results, and had unconditional offers from five universities, but sadly university life was too much for him and the bullying reoccurred.

“My managers understand me. Natasha has an autistic son and Hayley has experience of autism as well, so they really understand my situation.”

To get his quality images, Alfie meticulously plans his shoots and often spends hours working in the field to capture the perfect photo.

“I always know the type of photos I want to take before I go out. I will imagine them beforehand and will sketch them out. I take anywhere between fifteen and one hundred images at a time so it can take between two and five hours to get a single photo for publication. There are often days where I come back empty-handed, but that’s all part of the job.

Alfie, now aged twenty-one, is planning to visit Africa and India for the first time, alongside his managers, and is keen for these trips to raise awareness of charity efforts in both areas.

When Alfie was struggling at his high school, he went on day release to Clinks Care Farm at Toft Monks, near Beccles in Norfolk. He credits them with much of his success and he is now an Ambassador for the charity.

“I didn’t really speak to anyone when I first started at Clinks Farm, but last year I stood up and did a speech to five hundred people at their blues festival, all about my journey and how Clinks had helped me!”

Alfie says that the photography has been a way to channel his emotions.

“I used to contain everything when I was at school and then it would build up inside me, leading to big outbursts of temper. Now I can let that out through the photography, which is good. Photography literally saved my life. I often say I wish I could have seen what lay ahead….”

Now he wants to use his success as a platform to raise awareness of autism, give encouragement to other children and young people who are facing the sort of challenges he faced, and promote acceptance from the wider community. It was a huge step for Alfie to stand and speak at the festival, but now he has the confidence to go to his solo gallery events and he wants to go into schools to talk to pupils about his story and so inspire them. He also wants to speak out and help people to understand more about the effects of social exclusion, encouraging more acceptance of people’s differences.

“I want to change things for kids in the future, I went through hell at school and it was only when my mother went to court and got me into a specialist school that things really changed. At Centre Academy East Anglia there were small classes where everyone had special needs, there was no bullying or anything, and the teachers all understood.”

Alfie still finds it hard to believe it when people praise his work and is wary with anyone he does not know well but, when he relaxes he smiles, his face lighting up as he talks about his love for animals and the path he is now on.

“Two years ago, I had my first exhibition at The Centre Academy, and we made A4 prints of my photos and sold forty in four hours, for £25 each. I now have over 10,000 followers on Instagram and I want this to be my full-time career. I turned professional a year ago and my photos now sell for nearly £2,000 each. They are printed in Manchester, are museum quality, and are framed in London. I produce a limited edition of ten prints for each photograph.”

Alfie’s book is well underway, and he has the images prepared and has written 50,000 words, telling his story. His wildlife photographs have attracted the attention of his inspiration, Chris Packham, who is also on the autistic spectrum. Even now he is a very successful television presenter and author, Chris is open about the struggle he has had with social situations throughout his life. Alfie is honoured that Chris has written the foreword for his book.

Perhaps one of the most satisfying things for Alfie is that some of the teachers who wrote him off when he was at high school, now follow him on social media and have bought his work.

And the future? With a book, school tour, wildlife trip and exhibitions, Alfie has big dreams, but he is hoping to become even more successful so he can use some of the profits from his work to raise awareness of autism, and perhaps set up a foundation in the future. With his amazing photographs, Alfie should certainly be an inspiration to other struggling teenagers.