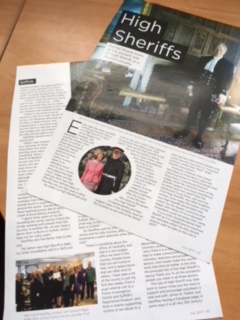 The High Sheriffs of Suffolk and Norfolk

The ancient role of High Sheriff, in a modern society. Every year, like other counties, Suffolk and Norfolk have a new High Sheriff. In April, James Bagge from Stradsett, was appointed to Norfolk, and Geoffrey Probert, from Bures, to Suffolk. A Royal appointment, this is an unpaid, unelected, non-political position, that lasts for twelve months. Apart from attending Royal visits to their county, and supporting […]