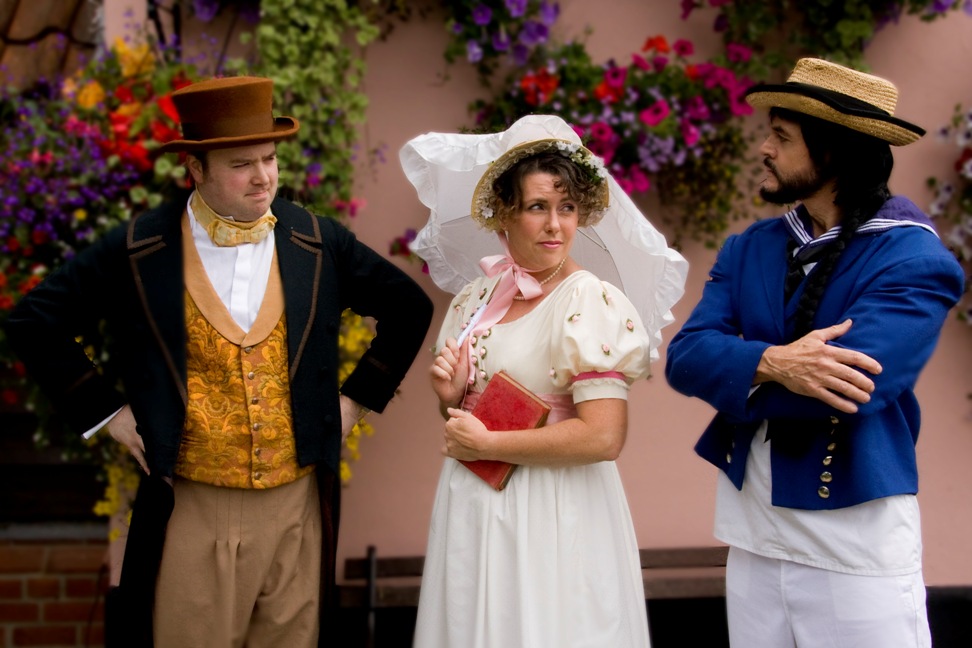 I have finally got to hear the song with the lyrics “Stir it and stump it and blow your own trumpet.”  Why is this memorable? For the past six years I have attended an evening of talks organised by the Ipswich and Suffolk Small Business Association which is called Stir it and Stump it – now I know why! It is one of the songs in Ruddiore by Gilbert and Sullivan and that is latest production by the Ipswich G and S Society.

There is a long tradition of slipping into a Gilbert and Sullivan operas, a few topical references. After all, they were the 19th century equivalent of The News Quiz and Have I Got News for You, with satirical comments on the politics and society of the time.

The Ipswich Gilbert and Sullivan Society didn’t let us down as, neatly inserted into the complicated plot of Ruddigore (heroine consulting an etiquette book regarding every decision, shy hero who loves her, whilst pretending not to be the cursed baron of the village, his sailor friend who returns and falls in love with the heroine and the Baron, who actually isn’t the baron, obliged by a curse to commit a crime every day!), are references to mobile phones, Al Gore, super-injunctions and Greek debt.

This drama group has a reputation for the high quality of their singing and neither the principals nor the chorus disappoint. Although rather squeezed onto the small stage at the Seckford Theatre, Woodbridge, the well rehearsed moves meant the cast coped well. The male chorus are stick-clashing, handkerchief-waving Morris Men and the female chorus were twittering “professional bridesmaids” (only in G and S!) desperate for a wedding, and are a delight. The bridesmaids with their fickle enthusiasm for every possible nuptial made me laugh every time they were on stage!

The leading roles were in experienced hands. Lesley Wittgreffe (Rose Maybud) carried the bulk of the plot and songs. With a confident and pleasant soprano voice and excellent comic timing, one moment she panicked over etiquette while the next, she juggled her potential bridegrooms. Her suitors were Robin Oakapple/Sir Ruthven Mugatroyd (Mark Ellis), and Richard Dauntless, the sailor and foster-brother (Gerry Bremner ) both acted and sung with great assurance and musicality.

There were several character roles, all well-played,  and special mention must go Mad Margaret (Sara Bucknall) wonderfully over-played as a mixture of Queenie in Black Adder and Margaret Thatcher, and to Sir Despard Murgatroyd (Glynn McKay) who was suitably evil and scary.

Two scenes were particularly effective. One was in the baronial hall and the cursed ancestors who, before they came to life to sing their warning to Sir Ruthven were, via some very clever technology, moving portraits on walls (if you have seen Harry Potter films you will know exactly what I mean). As the scene is played on the stage, each portrait reacted appropriately, and in the audience we followed a little sub-plot as snuff was passed from frame to frame and a golf putted on one side of the stage led to broken glass on the other. The portraits also took their own bow at the end of the opera! Very, very clever – especially in an amateur production.

The other scene of note needed no technology but just thoughtful direction to solve the problem of what do you do on stage when a very long overture is being played? Director, Brian Robinson caught our attention with a scene outside the pub with villagers meeting, shopping, gossiping and getting tipsy! It was like watching the opening of Larkrise to Candleford on the BBC!

There are none of the really well-known songs in Ruddigore, one of Gilbert and Sullivan’s less well known operas, but I am really glad I went to see it: it was a very entertaining evening, well-staged, well-sung with beautiful costumes.

Ruddigore is on stage at the Seckford Theatre Woodbridge, 25-29 October 2011

This review also appears on http://www.onesuffolk.net/home/previews-and-reviews/