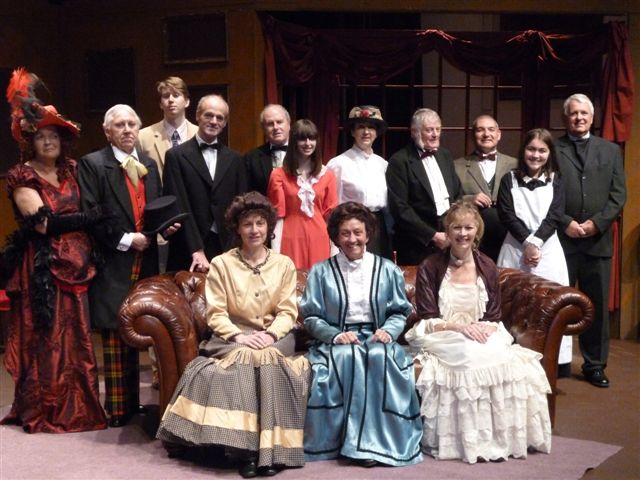 When We Are Married by JB Priestley. Framlingham Amateur Dramatic Society

If you go to see a play that you have seen performed several times, including a version with an all star cast, it is important to put aside all expectations and view the performance objectively. The first thing that strikes you when you enter the Headmaster Porter Theatre at Framlingham College is that Framlingham Amateur Dramatic Society (FADS) has created a realistic set that uses the large available space well.

The early 20th century Yorkshire sitting room is resplendent with deep window seat, luxurious velvet drapes, two brown leather Chesterfield sofas a piano, and French doors leading to an ornate wrought-iron conservatory. Perhaps it is a little less cluttered with photos and paintings than sitting rooms of this era usually are, but very pleasing.  You are reminded that the house is owned by a well-to-do local businessman by the projection of an industrial scene of the smoking grey chimneys of mills and factories on the rear wall, above and behind the set.

The play is the story of three couples who are celebrating their silver wedding day with a dinner party when, with the local press eagerly waiting for a photograph, they learn that the vicar who married them twenty five years before was not actually licensed to do so and the marriages are not legal.

When this news is revealed we have already seen what a miserable life hen-pecked Herbert Soppet (a suitably timid Glenn Hurlock) has at the hands of his harridan of a wife (well-played by Evette Price), how Councillor Albert Parker (Ian Baird, blustering beautifully) is a pompous bore but no-one dares to tell him, and that Alderman Joe Helliwell (Brian Cook) and his wife Maria,  (Barbara Hurlock) whose home we are in, are demanding of the servants, rude about the working classes and really too full of their own importance!

When the terrible news of the non-marriage is revealed by the chapel organist (Warwick Manning) as he is about to be dismissed, partly for his love affair with a mystery girl, actually the Helliwell’s niece , Nancy (Lilly Farres), and partly because he is a Southerner and too “la-di-dah.” The just-sacked char lady (Ros Johnson) overhears, tells everyone at the pub, and the sanctimonious bubble of the three couple’s lives, disintegrates.

How would most couples react? Well, the “worm turns” and Herbert claims his place as the assertive head of the Soppet marriage, Joe Helliwell has a lot of explaining to do as his blousy girlfriend (Alison Podd, literally a “scarlet woman” dressed in red) arrives at the house as he has always told her “if only I wasn’t married….”  Annie Parker gets the courage, backed by their friends, to tell her husband exactly what a “selfish, conceited, stingy and dreary man” he really is.

FADS have a strong cast to call upon and the roles, whether major or supporting, were played with confidence and with convincing Yorkshire accents. Naomi Marten (playing the stroppy maid Ruby), Warwick Manning (the organist) and Lilly Farres (the niece) showed FADS has a great future with these younger cast members developing their acting skills. Special mention must also go to the comedy role of tipsy photographer, Henry Ormondroyd (Geoff Jacobs) who, with his outlandish yellow and red tartan trousers and red waistcoat, looked the part and acted it well.

In the end the chapel marriages are deemed to be legal because of the presence of a registrar on the day.

The last time I saw this play it was at The Garrick Theatre in London and the cast included Maureen Lipman and Roy Hudd. I laughed then – and I laughed at Framlingham…. and you can’t get much better praise than that!

This review will also appear on http://www.onesuffolk.net/home/previews-and-reviews/