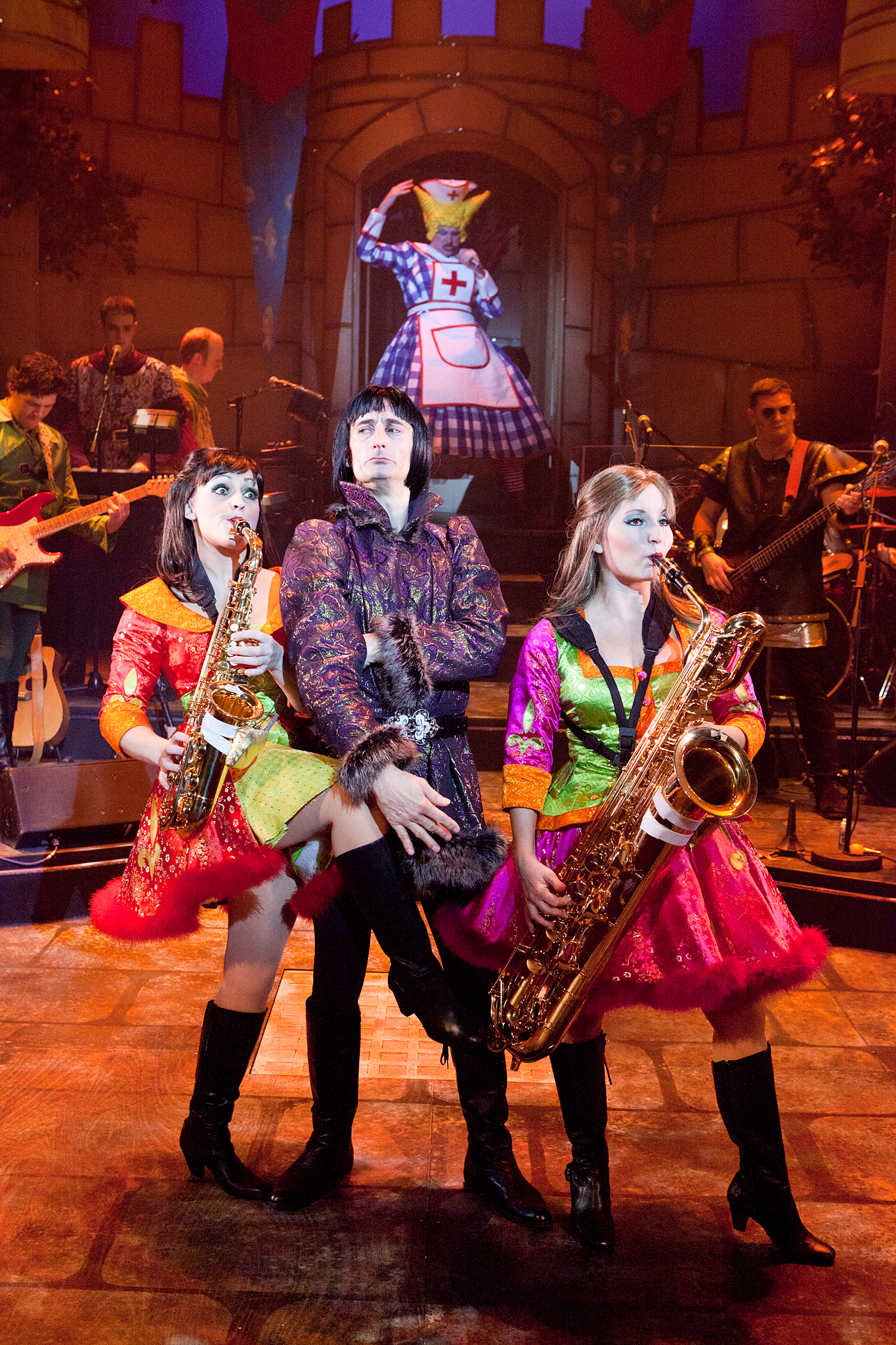 This years Rock’n’Roll panto is well underway at the New Wolsey Theatre, (“oh no it isn’t… oh yes it is!”)…….

The team on Civic Drive have been very clever, carving a niche (albeit a rather large one!) for a pantomime audience who don’t want the sugary, romantic style of traditional pantomime but something more sassy, that appeals to older children, teenagers and adults.

Robin Hood and the Babes in the Wood is colourful, loud, brash, with ghastly jokes, some rather sexy humour, brilliant rock and pop music ……and is Great Fun!

For two months this disgustingly talented cast will act, sword-fight, dance, sing and play all the instruments, slickly passing microphones and props, as they give pantomime a modern gloss.

The New Wolsey’s style of panto is now firmly established on the Suffolk theatrical calendar and this year’s show doesn’t disappoint. Those of us who are regulars know what to expect, but I took a friend who was new to the Wolsey, and to rock’n’roll panto – and my, was she impressed!

Once again the talented cast of actor/musicians perform all the live music, casually moving from their roles as dame or outlaw to sing backing vocals or play a variety of instruments in the rock band that is constantly on stage. The show includes over twenty rock and soul classic songs including The Hippy Hippy Shake, I Shot the Sheriff, Girls Just Want To Have Fun, Born To Run, and  Signed, Sealed, Delivered.

The traditional story is there – Robin Hood (played by Alex Tomkins) attempts to outwit the evil Sheriff of Nottingham (the deliciously creepy Anthony Hunt) , and free the “babes”, Britney and Whitney, two sexy Essex girls (Sioned Saunders and Sophie Byrne).

The cast of ten includes a “pantomime dame” – the babes nanny, the outrageous Nanny Nellie Nightnurse, (Will Kenning, master/mistress of ghastly puns and adlibs that can set the cast giggling), Maid Marion (Shirley Darroch, a great singer) the outlaws and the Sheriffs men, Portcullis (Steve Simmons) and Numbskull.(Tim Jackson).

With ten such talented performers it is always single out anyone for praise, (and this is a real ensemble piece), but  Tim Jackson with his naïve, “village idiot”  (yet somehow slightly sneaky) performance as Numbskill has to get an honourable mention: immediately it ended I wanted to hear again his solo  “Never fall in Love again”, with orchestration that included some lovely flute playing.

If you have young children and want them to experience a “magical” pantomime or like your panto’s to be romantic and bring a tear to the eye, to be honest, this isn’t the one to go to. But if your kids are a bit older or you and your teenagers are happy to go along with the ironic use of panto traditions (“he’s behind you,” “oh no he didn’t” etc), then head for the New Wolsey. (The cartoon-style violence, emphasised by appropriate sound effects, is probably more suitable for older kids too).

Leave your inhibitions at home, rediscover your inner child and shout out, groan at the jokes, and get up and dance – Robin Hood at the New Wolsey is a great night out.