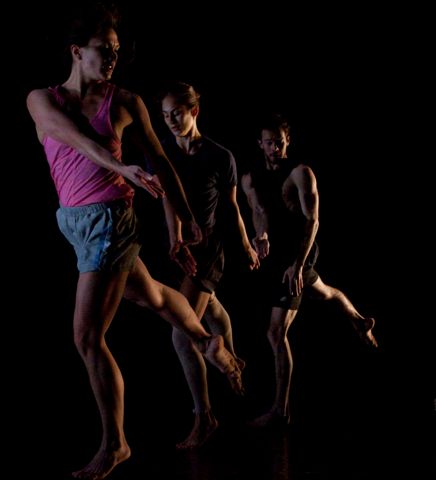 The empty stage with a floor-to ceiling white gauze curtain, revealed little of the quality of the performance and staging that we were to experience at Snape Maltings Concert Hall when Sydney Dance Company brought the UK premiere of a double bill of works by Rafael Bonachela, to Suffolk.

Contemporary dance is often exciting, physical and acrobatic but may sometimes only slightly hint that it has developed from classical ballet. At Snape the members of Sydney Dance performed a sensuous modern work that never failed to remind us that the much- loved roots of dance underpinned the choreography of 6 Breaths and LANDforms, set to newly commissioned scores by the Italian composer Ezio Bosso.

And that empty stage and gauze curtain? Dancers revealed via lighting as they perform behind such a screen, is now a common theatrical device. However, never have I seen it used so effectively as by lighting designer Nick Schlieper and the video art of Tim Richardson. Tiny white lights swirled across the surface like a hundred moths or a shoal of fish, only to combine into a three-dimensional rotating image of an enormous male head and torso which then dissolved away as the dance began from behind the screen. (Later, the video/lighting effect swirled again to reveal a woman embracing the man, before he dissolved like a breath of air, leaving her poised, ready to dance). It is hard to describe – yet magical to experience.

Performed by twelve dancers, the six sections of 6 Breaths include the sequence Out Of Breath (and yes, they are) before ending, slightly abruptly, with Last Breath. There are lifts and leaps but, whether they are dancing alone, in pairs (girls, boys or both) or as an ensemble, it is the slow, deliberate and controlled movements of Sydney Dance that are sensuous, moving and hypnotic as they dance to the music of piano and strings.

For the second dance, LANDforms, choreographer Rafael Bonachela took his inspiration from the Australian landscape where he has lived for some years. Solo dances, duets, small groups and some amazing sections where all fifteen dancers were on stage, each dancing a unique dance, yet all dovetailing seamlessly into one harmonious whole. Although the elements of landscape and weather were often subtly implied, at one point the dancers moving between the vertical spot-lights, looked to me as though they were in a rainforest, dancing through shafts of sunlight. Then there was the jaw-dropping finale… of torrential rain. How did they do that at Snape Maltings Concert Hall?

The two evenings of the Sydney Dance Company were jointly presented by Dance East and Aldeburgh Music, before moving on to perform at the South Bank Centre in London.  With such high-quality ensemble dancing and choreography, enhanced by stunning lighting and special effects, this was a performance to remember.