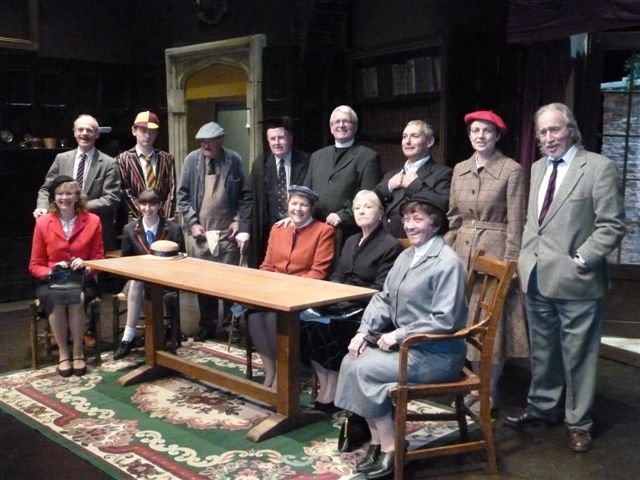 The Happiest Days of your Life, FADS

It was slightly disconcerting to enter a modern theatre and see, so faithfully represented, a scene that might have come from the boarding school where the hall was located. There on stage was a Masters Common Room that could have come from Framlingham College, situated just across the car-park.
The oak panelled room, with bentwood coat stand, fireplace, books, coat of arms and framed maps were, I am sure, dustier than the real version – but this was, after all, supposed to be Hilary Hall school for Boys, newly reopened post war, with masters and pupils  fresh from evacuation.
The Happiest Days of your Life by John Dighton, was made into a film and eventually inspired the St.Trinian’s films – and that was obvious from the plot and the characters.
We open with the returnee from military service, Dick Tassell (played by Glen Hurlock), back in his old teaching job, keen but regretting the lack of women in an all-boys school. There to update him on school news, whilst warning him off women teachers, was the weary old-hand Rupert Billings, (Rufus Plummer). With the help of the caretaker, Rainbow (Brian Cook), the school is run by their blustering Headmaster (Ian Baird, perfectly mastering withering looks, bewildered expressions and confused panic).
Their cosy world of mortar boards, gowns, canes and confiscated sticks of rock, is turned upside down when a second school is mistakenly billeted upon them – St. Swithin’s School for Girls. Their Principal (Barbara Hurlock), equally horrified by the turn of events, takes control of school – and the schoolmasters!
Her team of teachers are Miss Gossage (a wonderful jolly-hockey-sticks performance by Evette Price) who bounces around the staffroom, pushing her sliding spectacles up her nose every time she makes a play for the horrified Rupert, and Joyce Harper (Jane Manning) who proves that female teachers can be attractive – especially to besotted Dick.
The two teams of teachers join forces in their efforts to prevent their pupils from spilling the beans of the situation to their parents, by censoring their letters home and resorting to desperate (and hilarious) means to keep two sets of parents, on an unexpected visit, from discovering the truth.
Meanwhile, trying to thwart all their efforts, are two pupils, prankster Hopcroft Minor (Max Willson) and Barbara Cohoun (Lilly Farres), who is herself  nursing a crush on Miss Harper.
As the pace quickens, helped by an excellent set, props and costumes, the strong cast kept the audience laughing. Hopefully, after first night nerves have subsided, the need for prompting will diminish, as that inevitably slowed down some of the action.
This review first appeared on www.onesuffolk.co.uk
TagsFADS Framlingham theatre review