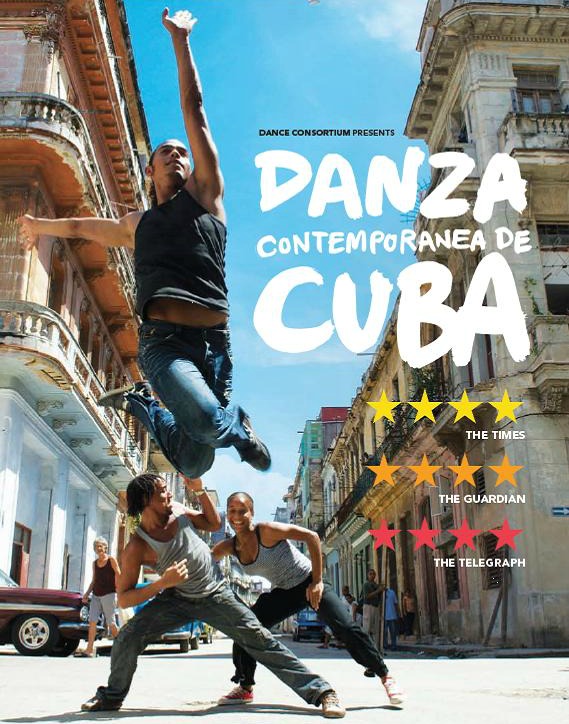 With so many theatrical experiences reduced, because of economic reasons, to a half a dozen performers, it is easy to forget the thrill of a stage, packed with movement and talent. DanceEast brought 21 dancers from Danza Contemporanea de Cuba,  to Snape, as part of a nationwide tour. With dramatic lighting but no scenery, they delighted the audience of contemporary dance lovers with their unique style of classical, American, Afro-Caribbean and Spanish dance.

The programme for the three part evening was nicely balanced and offered a variety of interpretations and styles.
It began with Sombrisa a dance that had echoes of the Jets and Sharks, (the gang fight/dances of West Side Story) as the troupe divided into opposing gangs and the boys squared up to the girls.  Dressed in grey skirts or trousers with white shirts, and bow ties, a stage full of waiters danced to Drumming Part 1, by Steve Reich, and melody-free it must have been very difficult without constant counting. Actually, the music I found too repetitive but certainly the dancing was anything but, especially the urban street-dancing. I was also rather puzzled by the boxing gloves the dancers wore ( very difficult for lifts I would imagine) but in the after-show discussion it was explained that the piece was from a Theatre Royal, Newcastle, commissioned work called Seconds Out, inspired by boxing, for the Cultural Olympiad.
The second performance of the night was Carmen?! danced to an arrangement of the music of Bizet. This was a comedy dance with mime, movement and props that the cheeky seven male dancers milked for all it was worth! In the dance we saw the bullfight (dying bulls as well as strutting matadors), amorous sheep, card-playing onlookers and the clicking fingers and stamping of flamenco.
Chuckling as we watched, none of us in the audience will quickly forget the red rubber gloves the dancers wore that suggested, all too clearly, the intentions of the male animals!
There was a complete change of pace when the third dance began. Mambo 3XXI saw a full stage again, the dancers dressed in white singlets and cream trousers or black shorts, three rows looking like a very serious gym class, dancing a military drill in precise, staccato moves. Then, with embarrassed glances, the mood, colours and costumes changed and suddenly we saw freedom expressed in fast running entrances, lifts, smiles and exuberant, jubilant salsa and jive. The dance ends with all the dancers back in their three lines, performing a similar routine to the beginning but joyously, with smiles on their faces.   I was left wondering if this was a metaphor for their lives in Cuba and the challenges the country has faced.
This is a world-famous dance company that develops and prospers despite the challenges of their homeland and their lives. They are rarely seen out of Cuba and we were lucky that Suffolk was included in their 2012 tour.
This review first appeared on http://www.onesuffolk.net/home/previews-and-reviews/reviews/
Tagsdance DanceEast Snape Maltings Concert Hall suffolk arts