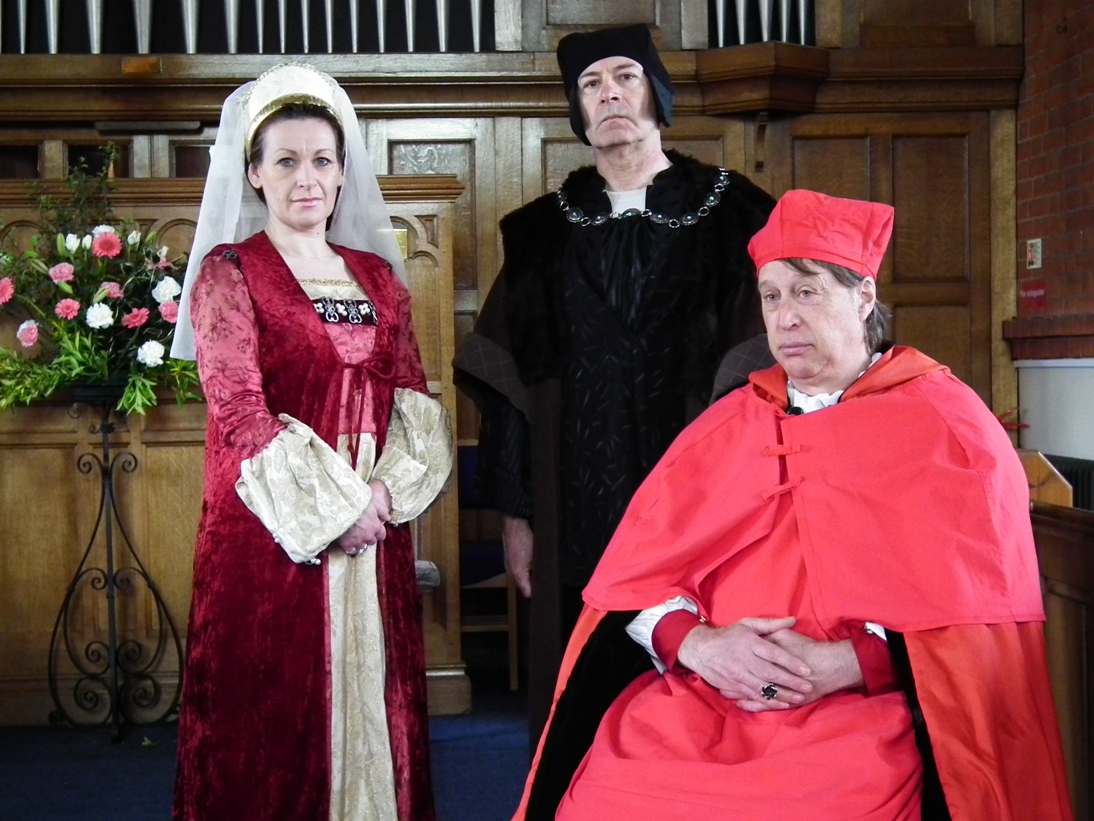 Review of Wolsey, the Rise and Fall

By Rachel Sloane
To sit in the pews of a 14th century Suffolk church, watching the dramatic life story of one of the county’s most famous characters, Cardinal Wolsey, was very appropriate. Bucklesham church (although extensively rebuilt in Victorian times), with its plain glass windows and whitewashed walls, is a good reminder of the consequences of Henry VIII’s desperate search for an heir that led to the Reformation, the formation of the Church of England and the destruction of the symbols of Catholicism.
In Suzanne Hawkes new play, which she also directed and performed in, her local knowledge and research skills were evident. There were references to Ipswich and Lady Lane, a place of pilgrimage at that time, to the closure of monasteries such as St Peter and St Paul, and to places such as Ewarton and Glemsford which all relevant to the story of the son of an Ipswich butcher who became Lord Chancellor, only to fall foul of the King and his wife.
As his biographer, George Cavendish of Glemsford asserts at the beginning of the play, his reputation was of a traitor and his work on tax and law reform and the promotion of education is all but forgotten.
The six actors of Black and White Productions played all 14 roles which, change of costumes aside, initially left the audience a little confused as to who was who, even with clear signalling from the script and an informative printed programme. The production settled down once the cast took on their main characters.
The three leading male roles were Thomas Wolsey (Rupert Herries,) Thomas Cromwell (Steve Roche) and George Cavendish (Thomas Haigh), all confident and convincing. The various female parts, such as Wolsey’s mother and the mad prophetess Elizabeth Barton, were shared by Suzanne Hawkes and Heather Prince (who made me jump out of my skin with her screaming entrance down the aisle!).
A touch of humour was provided by Bessie (Suzanne Hawkes), the servant in the Wolsey household, and by Patch, the juggling and prancing household jester (played by a mute but very athletic and expressive, John Ramirez).
The Wolsey story we all know from our history lessons but what made this (at Bucklesham, but with other churches to come) an evening to remember was the localness of the story, the very effective use of the venue and the atmospheric incidental music of the era, played on violin and sung beautifully by Ginny Davis.
The play continues its tour of Suffolk. Email susanhawkes@madasafish.com for more details.
This review first appeared on www.onesuffolk.co.uk
TagsCardinal Wolsey historical theatre Suffolk churches theatre in churches