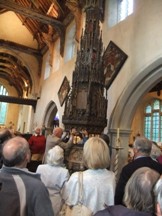 By Rachel Sloane
What is that shadow on the wall? Why is that pillar a different shape to the others? Could that door be a secret passage?
Every June the historian, Clive Paine, is “Let Loose” on a few of Suffolk’s wonderful medieval churches. The first evening has taken place and there are two more to go – and they are open to all.
On Friday 5th June 2012 around 50 people came to St Mary's church, Ufford – a church with a very long history – and with the help of Suffolk Historic Churches Trust grants, villagers have saved the 15th century tower of the church.
As we explored both the interior and exterior of the church Clive was able to show us signs of how the church was gradually built in the 13 – 15th centuries. We saw how the lower part of the nave's Norman north wall can be seen from the outside and how the varying shape of the pillars, different window styles and raised ceilings reveal the building work and extensions of the 14th and 15th centuries.
We all gasped as a miracle of engineering, from so long ago, was revealed when two church members slowly turned the base of the wonderful roof-high pinnacled font cover from c1450, and the structure raised on pulleys to reveal the font below, with it's tiny brass plug in the shape of a cross. With Clive we explored the 15th century benches with poppy heads and carved figures – one able to be dated precisely to 1412 because the woman's headdress was in fashion only in that year!
After an evening with Clive, never again will you be baffled in a medievel church by things like the strange little staircases that disappear into a wall – they were to gain access to the statues on top of the rood screen that in Pre-reformation times were part of English Catholic churches. At St Mary's the lower part of the screen is still in-situ and is painted with images of female saints – one with a beautiful serene face.
Over a lovely buffet and a glass of wine, local people from Ufford said they had learnt much about the history of their much-loved parish church – and we visitors were honoured to have been introduced to such a special place. Together we had all learnt to spot the clues  that would reveal the hidden history of other churches we may visit – thanks to church detective, Clive Paine.
Still to come:
22nd June 2012 Little Waldingfield St Lawrence: Park in village and road to church. Loos available in Village Hall to north of church.
The structure of the church reflects the parish’s wealth, as one of the centres of the cloth trade. The entire church was rebuilt in the 15th century on the footprint of the existing building. The arcades, windows and doors are all of the same style and have elaborate decorative surrounds. There are two rood-stair turrets, one of which was used in the pre-Reformation Palm Sunday services. The bowl of the 14th century font has carvings of the Evangelists alternating with seated monks. There are 16th century brasses to local clothiers, including Robert Appleton of Holbrook Hall. Outside there is a Tudor brick porch and traces of a demolished chantry chapel.
29th June 2012 Risby St Giles: Park on road adjacent to church.
The church has a Norman round tower and nave. The chancel is 14th century with niches either side of the east window which has reticulated tracery. There is also a low side window in the south wall. The east and south east windows have re-set medieval glass, including figures of St Edmund and St Catherine.
A series of tiered 13th century wall paintings include a Nativity series. Later paintings depict St Thomas Becket and Mary Magdalene at the Tomb. The 15th century screen is flanked by pairs of painted niches, which formed reredoses to the nave altars. A brass commemorates Reverend Edward Kirk (d. 1580) who wrote the introduction to ‘The Shepherd’s Calendar’ by Edmund Spenser.
All of Clive's evenings start at 7pm. The cost is £6 per person (payable on the door) and money is shared between the host church and Suffolk Historic Churches Trust.
For further information: www.shct.org.uk
TagsClive Paine Suffolk Historic Churches Trust Ufford