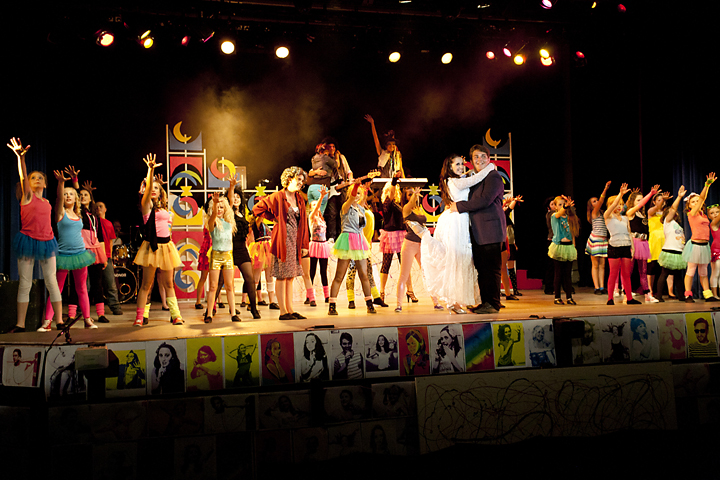 Review of The Wedding Singer at The Spa Pavilion, Felixstowe. 22 August 2012

Never having been to one of the Summer Youth Projects productions at the Spa Pavilion in Felixstowe, but knowing that it involved a group of  I0 to 23 year olds who rehearse and present a musical over just two weeks,  I was prepared to give it a go but held no great hopes, especially of a musical that we didn’t know and that had no familiar songs. What a mistake I made!

My six year old granddaughter and I went to see The Wedding Singer and were bowled over by it, (you can see the review that Abigail wrote below).  The storyline (of a wedding singer who is jilted at the altar only to find love with a waitress) had some “adult” moments,  some saucy costumes and raunchy routines and the director, Rebecca Darcey, did the right thing by treating all the cast, even the nine year olds, as mature performers and did not include  any “cutesy” items.

Set in 1985, this musical was a visual feast of colour, wigs, legwarmers and ra-ra skirts that had slick dance routines, well -sung ballads and rock numbers and an enthusiasm and professionalism to rival other  productions.

With a cast of 44 and a young stage team (who had learnt the ropes from professionals) it is hard to pick out any particular performers as all the leading roles, played by the older members, were well-cast and well-played. Special mention must go to the Wedding Singer himself (played by Wade Ablitt), his eventual bride, (Harriet Bacon) and the other members of his “band”, the bewigged Sammy (Gareth Davey) and the outrageous, George ( Josh Talbot, a very good  dancer).  I expect to see them all on the professional stage in the future – singing or acting or both!

The musicians (on stage throughout) were excellent,  the props a joy for  older audience members who could chuckle over the mobile phones that needed a briefcase for its huge battery, the “new” invention of CD players and the retro adverts shown on a screen in the interval.

This is a trip back to the 1980’s with a cast so good and well-rehearsed you forget some of them are so young.  This may have been my first visit to a Summer Youth Project but, with the possible closure of the Spa, I really hope it won’t be my last.

Second Review: From Abigail aged 6 and ½:

"I liked the show because it was funny and there's a boy called Sammy who was very funny because he looked like a hedgehog and the singing it was all good".

These reviews and others also appear on www.onesuffolk.co.uk.