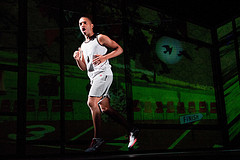 Review of The Loneliness of the Long Distance Runner, The New Wolsey Theatre. 16 October 2012

They were the sort of conversations you’d hear on any street corner where teenagers congregate.  A mixture of jostling, bravado, flirting, a bit of swearing and plenty of “Innits”, and expressions like “it’s sick, man”.

This play was an adaptation and updating, by Roy William, of The Loneliness of the Long Distance Runner , a short story about class and criminal justice system , by Alan Sillitoe.   Watching, the dialogue, costumes and attitudes were so realistic, you forgot this was a theatre and that it was young actors performing a script on a stage.

It is 2012, and the runner of the title, Colin Smith (played by Elliot Barnes-Worrell) is in a Young Offenders Institute after stealing a cash box from Greggs, the bakery boarded up after the London riots. The story of Colin’s life, the death of his father, his mother’s new boyfriend, his friends,  and his crime, are told in flashback, interspersed with life lived under the threat of violence in the Institute. His passion for running is spotted and encouraged by his despised mentor/coach, Stevens, (Dominic Gately), who persuades the authorities to let Colin run alone in the grounds, training to represent the Institute in a long-distance race.

Does Stevens really have Colin’s best interests at heart or is he only anxious to win a political point, as the local private school is also competing?

This new play came to Ipswich from Pilot Theatre, working with the York Theatre Royal.  Pilot work with young actors developing new talent, and they also run education workshops in schools and provide teaching packs for their productions.

This was an all-round strong cast but a special mention must go to Elliot Barnes-Worrell who must be the fittest actor around! The ingenious set comprised of projections onto a gauze screen which, when lit, revealed the characters in Colin’s past. In the foreground, set into the stage, was a moving treadmill where, as he told his story, he ran… and ran.. and ran. (And never seemed out of breath).

Colin eventually takes control the race, and his life, in front of the crowds cheering him on, because, as he said, “I don’t race, I run.”

It was pleasing to see the New Wolsey Theatre almost full of teenagers, as several school parties were attending. Even if they hadn’t personally faced the life challenges that Colin had, they obviously empathised and understood his situation… and we older audience members learnt a little of what life is like for an inner city London kid.

This review also appears on http://www.onesuffolk.net/home/previews-and-reviews