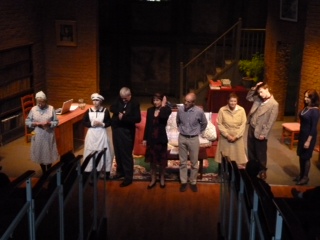 Review of Out of Sight- Out of Murder by Framlingham Amateur Dramatic Society, 31 October 2012

Murder mysteries of a certain era usually have a standard cast of characters: the elderly spinster, the romantic hero, innocent heroine, the sexy vamp, a ditsy maid, a solicitor to read the will and a pompous butler “who done it” (or may have).

Authors always say that their characters take on a life of their own when they start writing a story…. But what if they really did come to life and want to take over the action?

This is the delightful premise of “Out of Sight – Out of Murder” by Fred Carmichael which, with the addition of local references such as the flat fields of Suffolk,  Campsea Ash station,  and “Places and Faces” magazine,  Framlingham Amateur Dramatic Society  have helped a funny play become even funnier.

The cast of nine are all excellent in their roles and confidently tackle the humour of the lines, farce-like entrances and exits  – and the drama of lightning flashes and multiple murders.

The writer in question  is Peter Knight ( played by Glenn Hurlock) and his cast of characters are Lydia Dillingham (Ros Johnson), a sultry solicitor’s wife enjoying being “freed” from the confines of the waiting room for characters and keen for some romantic action, Cogburn the butler (a deadpan Peter Turner),  the heroine is played by Evette Price, the long-suffering cynical spinster  is Alison Podd,  and Lilly Farres is the maid whose dramatic exits in floods of tears (“ I am ALWAYS pregnant and I ALWAYS get murdered!”) had the audience laughing every time.  The solicitor (Geoff Jacobs) and Max Willson ( a delightfully irritating young hero, too nice for his own good) complete the line-up of characters in the story of murder  that will only finish when Peter finally types “The End”.

Mention must also be made of Judith Russell who plays his housekeeper, a very funny performance with echoes of Mrs Overall of TV fame.

With a successful set and staging and a very strong FADS cast , Tony Lawrence, the director, and his team have created a very enjoyable production.

This review also appears on http://www.onesuffolk.net/home/previews-and-reviews/reviews/