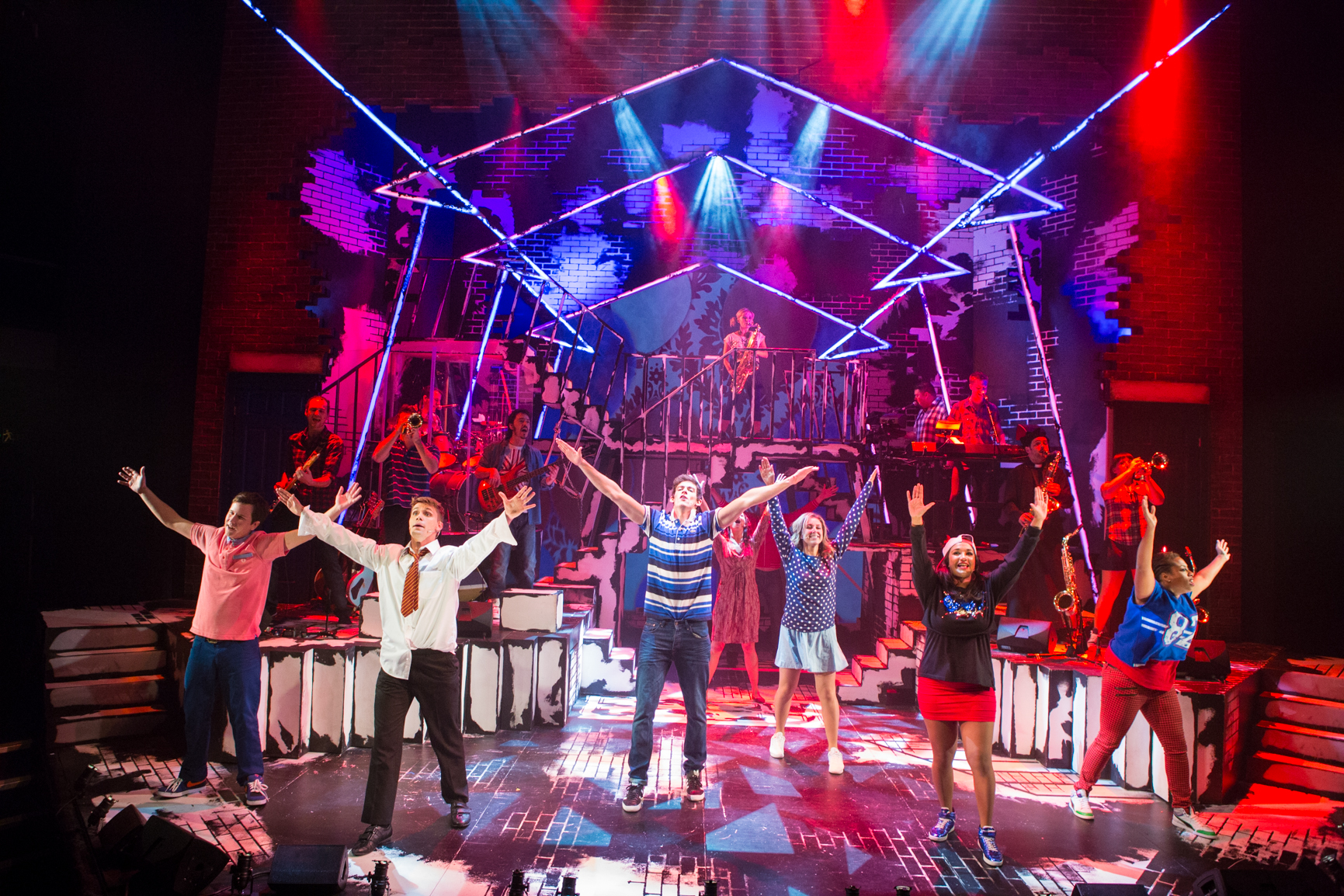 The pop group Madness were at the height of chart fame in the late 1970's and 1980's and it is easy  to forget just how good their music is. The high energy numbers like Our House and I Like Driving in My Car are sure-fire sing-along numbers, but more thoughtful numbers, that were never such big hits, are long forgotten by most people. That isn't true any longer for anyone who has been to the New Wolsey Theatre to see their production of “Our House”, soon to go on tour.

The theatre has a well- established and deserved reputation for their musicals and pantomimes, using casts of actor/singer/musician/dancer performers – and this show has 18 of them! Where do producer find all that talent?

The story is of a 16 year old Joe Casey (played by Alexis Gerred) who, following his surprise birthday party, is confronted by a series of dilemmas. If he takes the “Wrong Route” his life will follow the criminal path of his dead father, (played by Sean Needham,  who is on stage narrating the story whilst regretting his misdemeanours) but if he tries to do the correct and responsible  thing, (the “Right Route”) his life will be very different. As Joe’s story develops  the “Routes” are shown as differing scenarios, depending upon whether he goes through a revolving black or a white door, and wears either a black suit (a prosperous life but with riches gained from crime) or a white track suit, trainers and hoodie as he tries to resist the  temptations and peer pressure that come his way.

The stage at the New Wolsey is framed in a proscenium arch of lights, and scene changing is mainly with interlocking blocks and a back projection that takes us from dance hall, to Casey Street, to church,  and Las Vegas, via London street scenes. The complicated set of tiered levels and rising stairways leave a tiny performing area for the 18 strong cast, but, whether used for performers playing instruments or acting, the vertical areas more than compensate and the stage never seems over-crowded – no matter how energetic the dance routines.

With such a strong cast it is hard to single out individuals but lead characters (apart from those already mentioned) include Joe's girlfriend Sarah, (Daniella Bowen) and Mum (Rebecca Bainbridge), and providing comedy and street swagger, the couples friends (played by James Haggie, Alex Spinney, Natasha Lewis and Dominique Planter ).

Apparently there are 148 costumes including those for a priest, a  clown and a dog, and Joe has some impressive quick changes from black to white, one of which happened in the blink of an eye, on the stage. The wardrobe, lights and scenery teams must share top billing in this show.

Then we come back to the music. Somehow Madness hits naturally intertwine with this story of temptation, bad decisions, juvenile detention centres, property developers, a family house and a car: bright red and driven, from the rear of the stage, for the song, "I like driving in my car…"

“Our House” is touring after its premier in Ipswich so catch it quickly. Tickets are selling fast but a warning: like us, you will probably be buying a Madness album very shortly after seeing the musical.