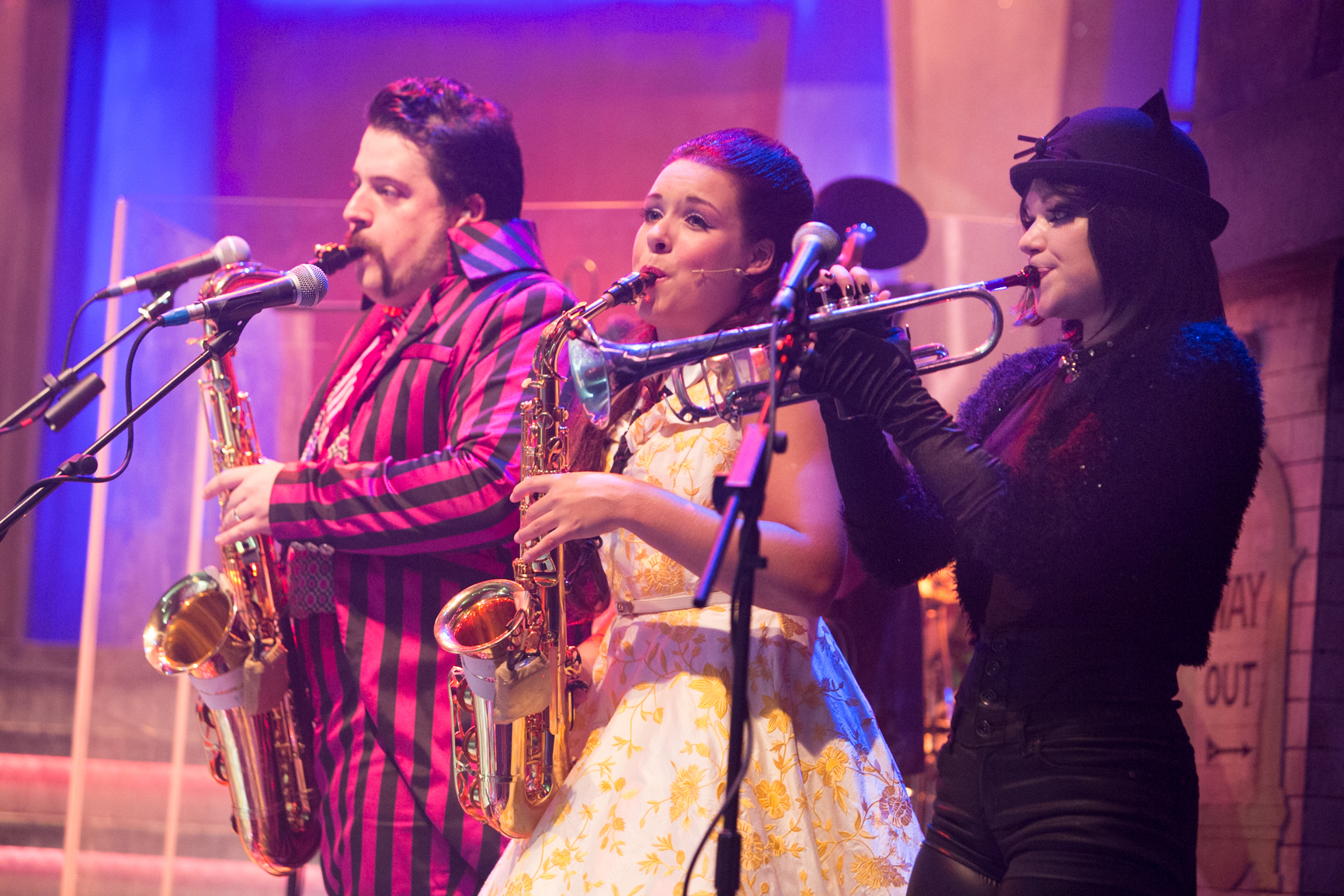 Singing, dancing, laughing, playing, acting and having fun. That’s the amazing cast of ten talented musician/actors appearing in Dick Whittington, at the New Wolsey Theatre in Ipswich. When the first Rock’n’Roll pantomime opened in Suffolk, courtesy of the team at the New Wolsey, thirteen years ago, we didn’t know what had hit us.  Yes, there was the traditional dame, the fairy, a love story, a baddie, the shouts of  “Behind you” and “oh no, he didn’t” …but this show dragged pantomime into the 21st century. The music was rock and pop, and the cast played all the instruments, replacing the orchestra– and we loved it!

The novelty of this very modern style of pantomime may have worn off in Suffolk but the excitement, laughter and sheer joy remains as strong as ever – and that is just from the adults in the audience!  There is enough adult- humour (going over the children’s heads) combined  with raunchy rock songs to please the grown-ups but this is the pantomime that cool teenagers and smaller children will also enjoy. Adults won’t feel they are attending just for the sake of their  children and office parties can happily rock alongside Cub packs.

So who are these ten multi-talented performers who make a hard job appear so effortless? Dick Whittington, (played by AJ Dean), was clad in jeans, leather jacket and boots, Alice Fitzwarren (Nicola Hawkins) demure in ‘50’s style petticoats, was transformed into a rock chic when singing and playing.  Dame Sarah the Cook (Sean Kingsley) in increasingly outrageous costumes, telling terrible jokes, played the audience well, including “Steve” the hapless audience member who found himself on stage and included all evening in the banter. The wicked “baddie” King Rat (Dan de Cruz) in his combat clothes and slimy tail, led his gang of rats below the pavements of Mansion House Square, London, and fought the sexy leather-clad Taffeta the Cat (CiCi Howells). More humour was provided by Alderman Fitzwarren (Jofre Alsina) and the hapless Billy Bungalow (Tim Bonser).

This is another seasonal triumph from the New Wolsey team, both on and off stage, but also spare a moment to glance at your fellow audience members. One high point for me was spotting all the ex-punks, now respectable Suffolk citizens, in their element as they sung along to the Rat punk band. It’s not often you get to hear a song like “You’re so pretty” sung punk-style in Dick Whittington!

This review also appears on http://www.onesuffolk.net/home/previews-and-reviews/reviews/