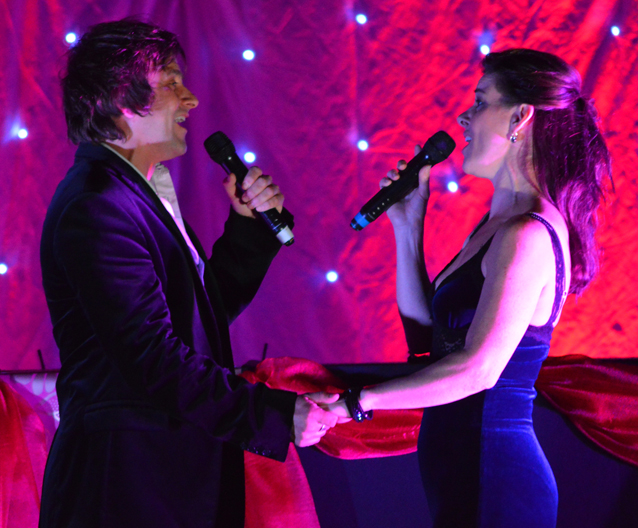 To get the chance to see top West End stars performing in an intimate setting is a very special experience. When they are relaxed, happy to ad-lib with each other and singing for sheer pleasure, it adds to the experience even more.

St Josephs College, in Ipswich, is lucky enough to have a couple of students whose famous parents were  willing to give their time to help with a fund raising venture. So, an audience of around 300 got to see Ruthie Henshall (Cats, Miss Saigon, Crazy for You, Oliver!, Chicago etc) and Tim Howar (Rent, Rock of Ages, Miss Saigon, Joseph, Oliver! etc) singing a selection of their favourite songs from the shows they had appeared in, as well as some Tim had auditioned for but, as he ruefully told us, didn't get!

The concert was in the modern school chapel, transformed with staging and lighting into a theatre. Accompanied by piano, guitar and drums, Ruthie and Tim had at least one of their daughter’s in the audience (claiming a quick hug as mum and dad went on and off stage). I have seen Ruthie in several of her award-winning performances and she never fails to thrill. As always she was the complete star, experienced in cabaret and concerts ,as well as musicals and plays, who knows how to entertain the audience with behind-the-scenes stories, as well as her songs.

Tim’s work I was not so familiar with, but I would recommend you get to see him as soon as you can.  He has the most amazing versatile voice, whether singing the hits from musicals or rock. A Canadian, he is about to go on tour with Mike Rutherford, fronting Mike and the Mechanics on a USA, UK and European tour.

The evening at St Joe’s was held to raise money for The Osiligi Project in Kenya. A small group of students and teachers from Ipswich are going to Kenya to run a summer camp for the children who attend the school there. With the silent auction that was part of the evening, Head West raised over £5000 to support this overseas work.

So what were the highlights of the evening for me? There were almost too many to mention. Ruthie and Tim’s duets included Anything You can Do I Can Do Better and they were very funny with their asides. You could hear a pin drop when Tim was singing Bring Him Home from Les Miserables accompanied by a solo guitar,  and we were waving in our seats for Follow You, Follow Me which he will be performing with Mike and the Mechanics. Everything that Ruthie sung from her hit shows, were rapturously received and there was a loud cheer for her finale,  All That Jazz …which must be her signature tune now!

What was especially pleasing was the obvious affection and friendship that Ruthie and Tim have – not many divorced couples appear to get on so well and are willing to tenderly sing love songs to each other!

(This review was originally written for http://www.onesuffolk.net/home/previews-and-reviews)