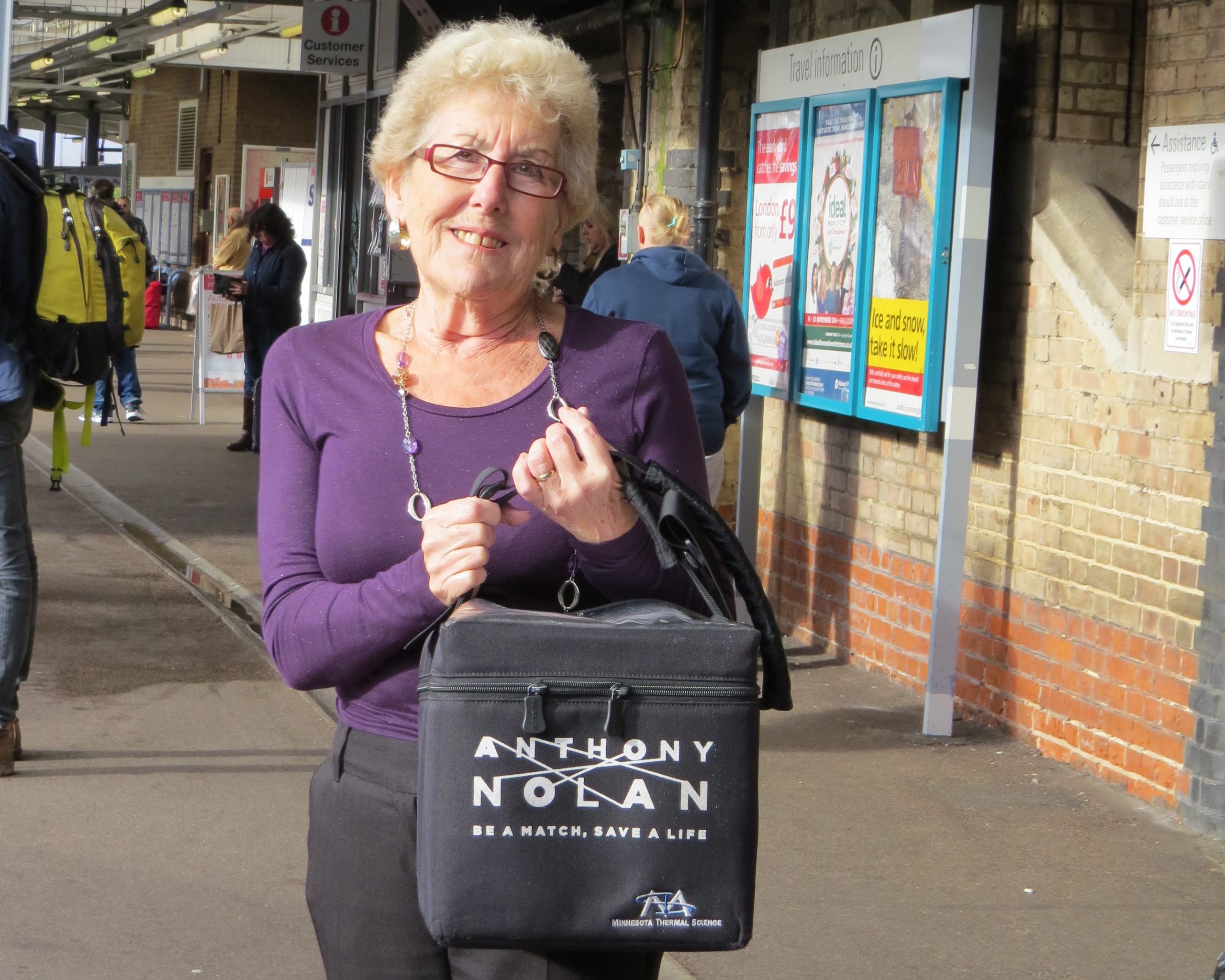 Journeys of a Very Special Courier

When you have done 270 trips in seven years, and jump on a plane most weeks, you must know some airports and hotels very well. However, we are not talking about a high powered executive jetting off the business meetings, but a volunteer courier from Hadleigh in Suffolk, whose role is to collect donated bone marrow and return it safely, in a maximum of 72 hours, to a waiting patient in a UK hospital.

The volunteer is Glenn Abbassi, and she is one of 40 volunteer couriers for Anthony Nolan, the charity set up forty years ago  with the aim of creating a world-wide bone marrow register for people dangerously ill and needing a transplant. The mother of Anthony Nolan, Shirley Nolan, achieved her dream of creating a register, but not in time to save the life of her son who died of a rare bone marrow disease.

“ Despite incredible treatment from the Royal Marsden hospital in Sutton, Peter died in 1980 of aplastic anaemia, similar to leukaemia, but the Anthony Nolan bone marrow register was very much in its infancy, and there was no question of him having a transplant,” explained Glenn. “I started having patients and residents to stay at my house which was very close to the hospital, and to cut a long story short, in 1986 my husband Eddie came from Iran to be the donor for his brother (who is alive and well in Tehran). We married in 1988, and his stepchildren came to the UK a few months later, and are still in Sutton, while we now live in Suffolk”.

When someone needs a bone marrow transplant, their profile is matched to a donor from anywhere in the world, hence the need for couriers to travel across the globe. Glenn has collected donations from 21 countries so far, including most European countries but also Thailand, China, Hong Kong, Canada, the USA and Australia.  She has now been to Germany 204 times as that is the most frequent journey that the couriers do, because Germany has a very proactive scheme that encourages young people to sign up as a potential donor. They have a register of over two million names on the German Bone Marrow Donor Centre, whereas in the UK the figure is about 600,000.

Anthony Nolan, as well as fundraising and arranging the collection of bone marrow, also works to increase the number of people on the British bone marrow register and anyone in good health, aged from 16-30, is accepted.

Glenn invited me to go with her to the Anthony Nolan Supporters Awards at the House of Commons where certificates were given to recruiters as well as fundraisers, patient champions, volunteers, and also scientific, medical, celebrity and political supporters.

Specially commended was Janet Qualters who works at RAF Marham in Norfolk  and has been a supporter of the charity since she lost her son Daniel to leukaemia, 25 years ago. Thanks to Janet, RAF Markham has recruited nearly 300 people to join the register and raised over £20,000.

I asked the Chief Executive of Anthony Nolan, Henny Braund, why they were holding the event,

“I think it’s incredibly important to be able to be able to thank all the inspiring and brave people who support our charity. We wouldn't be able to do the work we do and save the number of lives we can without the support of the people here tonight. In 1986 we were doing twelve transplants a year  and this year we saved the lives of 1,260!”

None of those transplants would take place without volunteer couriers such as Glenn. Arriving in a country, she notifies the hospital, clinic or university, that she has arrived, and the following day, after a successful donation, with her precious cargo in a special padded cool bag, Glenn heads for the airport, hoping for no major delays. For long haul flights she arrives in a country a couple of days in advance, so that she can get over any jet lag – and usually manages to do a little sightseeing. Glenn is just paid her expenses for the trips she makes and, mindful of the charity’s limited finances, is quite an expert on low cost flights, budget hotels and meal deals!

Bringing a bone marrow donation back from another country is a huge responsibility, so does she ever think about the person waiting back in the UK?

“I always know that this is their final chance of survival and they're in a desperate situation because they don’t have a comparable donor such as a sibling, who can donate for them.” admitted Glenn.

One of the other couriers, Maureen Savage, had an eventful year in 2014 when she had to battle through the floods in the West Country and was evacuated from her hotel in Tel Aviv due to bombings in Gaza. Luckily the most worrying time for Glenn has been when airport security has been over -zealous,

“I was travelling from Sydney with a change of plane at Dubai. The security guard there insisted that my cool box had to be x-rayed as I didn't have an export license from Dubai, just from Australia. I knew that was one thing that must not happen. I stood my ground and eventually someone higher up was called and I was told to go round one side of the machines. So the box wasn't x-rayed – and neither was I! So much for security…”she laughed.

Other countries use paid couriers to do the work that Anthony Nolan trusts to their volunteers, whom they train well. At the moment there are no vacancies for volunteer couriers and Glenn is one of the last who live outside the London area, as it is quicker (and cheaper) for the charity to use people who are based near Heathrow. She hopes to be able to continue being an Anthony Nolan courier until she has achieved her aim of doing 300 trips, which will probably be in the summer.

At the Anthony Nolan Supporters Awards I met families whose loved ones had been saved by bone marrow donation, including several very excited children. There were also a few tears as people accepted awards, sometimes just days after losing the loved one who had inspired their support of the charity.

To go on the donor list costs nothing and registered donors may never be called upon to give bone marrow. A  “spit-test” pack is sent and, when analysed, details are put on the register. If you went on the register, one day you could receive the message that you have the opportunity to save some-one’s life by donating your stem cells, through a process like giving blood. A courier, such as Glenn, may come from across the country, or the world, to collect your very precious donation – a life-saving gift that money cannot buy.

This article was first published in Suffolk Norfolk Life Magazine in January 2015.