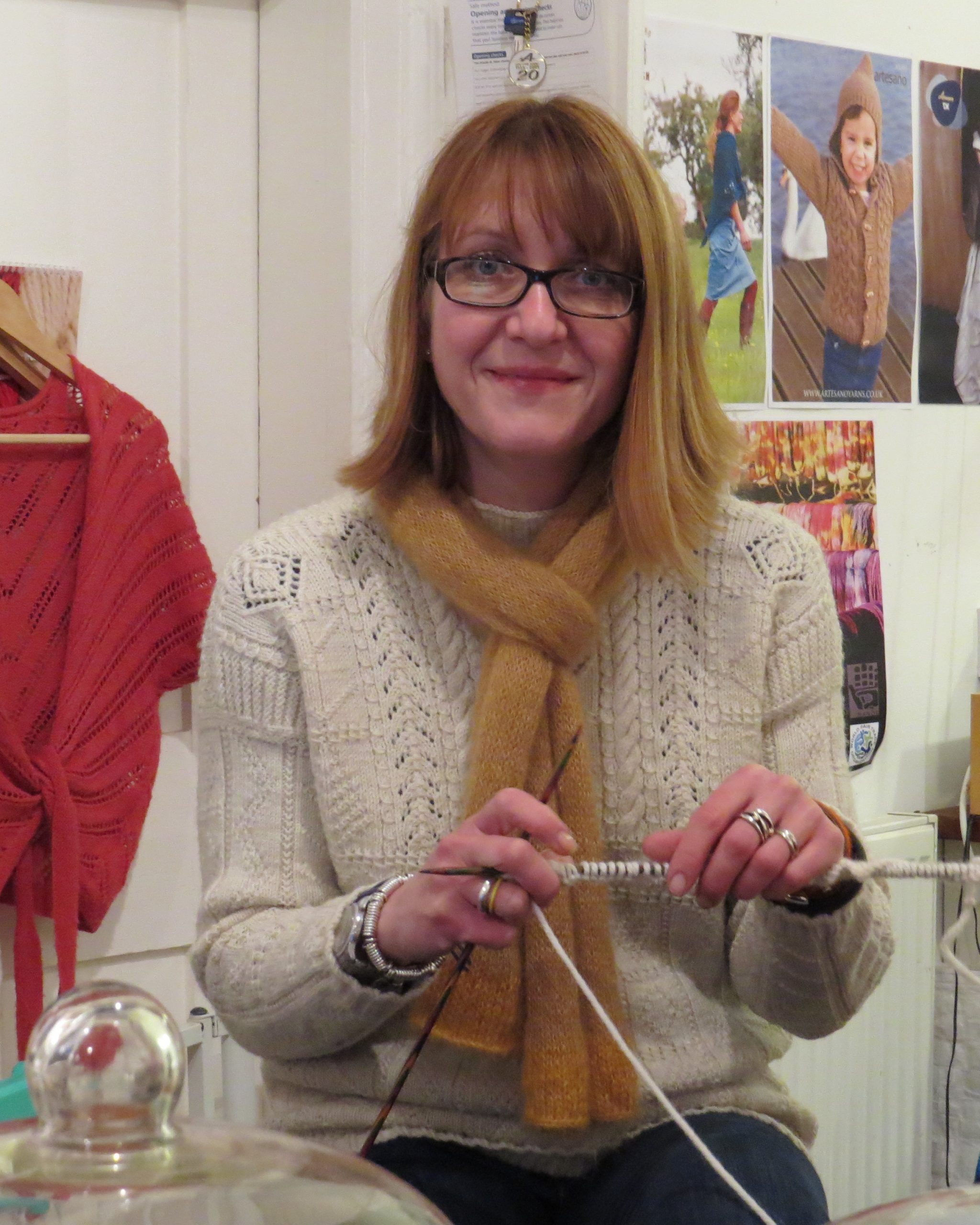 When I was a child, growing up in the 50’s and 60’s, it seemed that every woman was knitting. The click of the pins would be heard on buses, in the doctor’s waiting room and even at church meetings. Girls (and knitting was usually a female occupation) was one of those things that mothers taught their daughters. Many of us also spent hours with arms outstretched, as our mothers wound skeins of wool into balls – often after an old cardigan had been unpicked and washed, for the wool to be reused. Few working class people bought their knitwear ready-made from a store, and jumpers, scarves and gloves were hand-knitted and worn with pride.

By the 1970’s many crafts had become popular and we were not only knitting but had learnt to do macrame and crochet, producing berets (probably thanks to the influence of the film Bonny and Clyde), shawls (echoes of flower-power and hippies) or brightly- coloured blankets. Then fashion moved on, knitwear became cheap to buy and knitting was something done by grannies who presented Christmas jumpers that became the butt of jokes.

How times have changed! Over the past few years knitting has quietly become a trendy thing to do again, designers are producing knitting patterns for clothes that could grace a catwalk, and a new generation of young women (and some men) are eager to learn the skill that their mothers may have forgotten.

To address this interest, the traditional wool shop our grandmothers would have known, have been reincarnated and many now offer courses in how to knit, with a few even combining the shelves of balls of wool and pattern books, with cakes, coffee and a place to meet your friends.

Victoria Beech was working in London and pregnant with her first child when her passion for knitting began. Soon she was selling wool from the online website she created,

“My husband said that I had so much wool I might at well have a wool shop and, in 2008, I created a website selling patterns and wool. I called it Cafe Knit because my long-term plan was to have a cafe and knitting shop where people could come and browse, as they relaxed and drank coffee.

When the chance came to move to a house and shop in historic tourist honey-pot Lavenham, in Suffolk, (which in the 15th century was one of England’s oldest and richest wool towns), it seemed the perfect opportunity for Victoria to realise her dream.

Already an accomplished knitter, to go with the homemade cakes, Victoria knew that she had to train to be a barista so that she could serve coffee that would achieve her aim of being “the best in town”,

“The chap who came from “Mad about Coffee” in Norfolk to supply my coffee, serviced the machine, (a very superior machine I bought on Ebay) and taught me to make good coffee. The first day I was praying no-one would order a cappuccino! “

”It is as much about the coffee as the knitting. We have as many people come in for the coffee and the community feel, as we do for the knitting. On a weekday, tables will be full of people meeting for a chat, and it isn't just women. Men seem to like the colours and experience of the shop too.”

Victoria offers one-to-one knitting lessons and courses in beginners and advanced knitting and crochet – and she runs a very popular sock knitting class. One evening a week, knitters descend upon Cafe Knit for a “knit and natter” evening and, while I was there, the click of the pins accompanied the laughter, chat and the smell of coffee, ensuring we all forgot about the rain beating down in the darkness, outside the shop.

Those attending “Knit and natter” have become firm friends.  Jane started coming a year ago because of boredom,

“I didn't want to stay in all winter and, living in a rural community, you don't see anyone after dark, so came to give it a try.”

I asked her what she had made in the twelve months,

“A lot of scarves!” was her reply, to hoots of laughter from all the knitters.

Rebecca told me initially she was hopeless but has learnt to crochet ….and the others insisted she showed me the beautiful, delicate, crochet dress she had made,

“It is nice to make something and know that no-one else will have anything like it,” she explained modestly.

When Cathy’s attempts to teach Victoria to knit failed, it was to Youtube that she turned,

“You just put in any stitch and there will be a film showing how to do it,” explained Victoria. “They go really slowly and you can pause the film and go back if you need to.”

The thrill of the evening for me was when Victoria told me that her 15 year old daughter, a regular at “Knit and natter” but missing that evening as she was revising for exams, had taken her knitting with her on a day trip to London. It so reminded me of when I was growing up and knitters used every spare moment to get on with their current project,

“We were at the Victoria and Albert Museum and needed to sit down and have a rest, and she just got out her knitting from her bag.”

Daisy had come a long way in a few months, when initially her love of knitting was an embarrassing secret.

All those years ago, when I was taught to knit by my mother, she spent most of the time helping  me to rescue dropped stitches, so never thought that I would be tempted to pick up a pair of knitting pins again but, after a visit to the Cafe Knit in Lavenham,  who knows?

Knit with the best quality yarn you can afford. Also, the finishing is most important so “block” (press) carefully before you sew your garment up well. So many garments are ruined by bad sewing up. It can make or break something.”

“I am always happy to help my customers with their projects. The advice I give to new knitters is to choose an inspiring yarn and a small project such as hand warmers or a simple hat so that they achieve something quickly. I also encourage knitters to learn grafting and mattress stitch for a professional finish when making up their garments.”