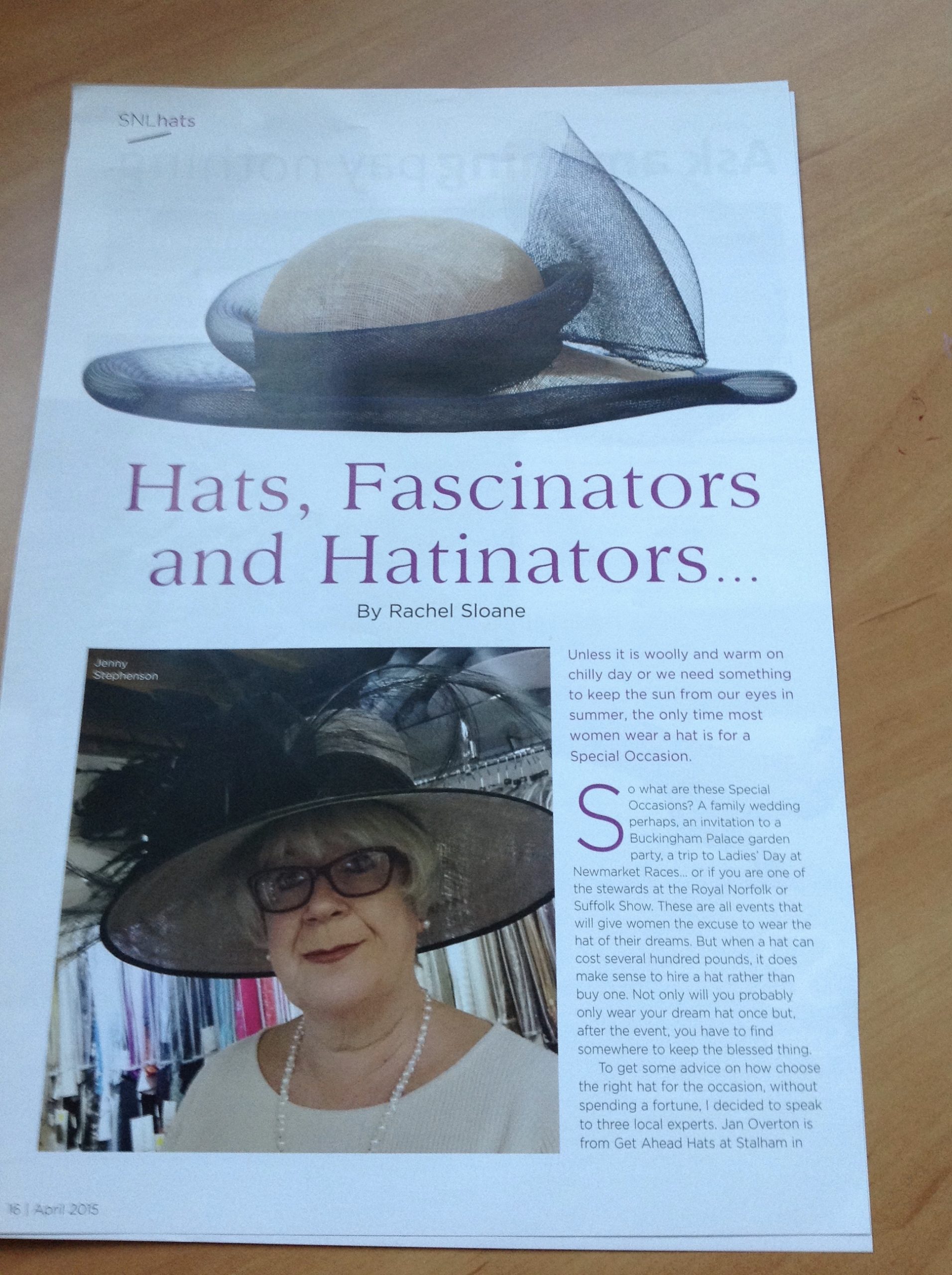 Unless it is wooly and warm on chilly day or we need something to keep the sun from our eyes in summer, the only time most women wear a hat is for a Special Occasion.

So what are these Special Occasions? A family wedding perhaps, an invitation to a Buckingham Palace garden party, a trip to Ladies Day at Newmarket Races… or if you are one of the stewards at the Royal Norfolk or Suffolk Show. These are all events that will give women the excuse to wear the hat of their dreams. But when a hat can cost several hundred pounds, it does make sense to hire a hat rather than buy one. Not only will you probably only wear your dream hat once but, after the event, you have to find somewhere to keep the blessed thing.

To get some advice on how choose the right hat for the occasion, without spending a fortune, I decided to speak to three local experts. Jan Overton is from Get Ahead Hats at Stalham in Norfolk, and in Suffolk, Jenny Stephenson who owns The Wedding Shop in Bungay and Clare Lock owns The Suffolk Hat Company near Hadleigh.

Jenny’s shop developed naturally from the china and crystal store she owned,

“I was increasingly asked for crystal wedding accessories such as tiara’s and jewellery. That led me into creating fascinators and eventually I started stocking wedding outfits with matching hats. We also started the trend for what we call a ‘hatinator’”.

A change of rules for the Royal Enclosure at Ascot also helped that trend when fascinators (a clip with some feathers or flowers) were banned and hats had to be at least 10cm wide. Thus the ‘hatinator’,  or ‘percher’ as they are also called, was created.

“When Ascot banned silly bits of nonsense we created disc shaped small hats that sit on a head at an angle. And women really love them!” explained Jenny.

Get Ahead Hats in Stalham, is owned by Jan, who, after a career in fashion was looking for a business to run from her busy farm.

“There are now 16 farmer’s wives running Get Ahead Hats franchises all over the country, and they are very successful,” she explained to me. “ We are all mad about hats of all shapes and sizes, including ‘perchers’ which are usually on a headband and vary in size, making them very easy and comfortable to wear”.

The Suffolk Hat Company was set up by Clare, after she took a millinery course at Otley College in Suffolk, and found she had a flair for hat-making.

“It was 2007 and I attended 13 weddings that year, so ended up with quite a collection of hats that I had made,” she laughed. And so her business was born.

Clare has a showroom that her clients visit by appointment and with a full time job, 6 year old twins and hats to make, she is kept very busy,

“I make the hats in the evenings and my collection now is about 50/50 hats I have made and hats I have bought in. Making the hats myself means that I can colour match outfits and dye feathers so that the hat becomes not an accessory but part of the outfit.”

So what is the advice for choosing the right hat – should it be your face shape, the outfit or the occasion that leads the decision?

“ I hate to hear someone say that hats don't suit them!” claimed Clare. “ Hats suit everybody, you just have to find the right shape and style, just like a dress.”

“The main thing is that a hat should suit you,” said Jan.“ It is no good choosing a big hat if you are a small person!”

Jenny agreed, “ A hat brim should be no bigger than your shoulders as it will make you look shorter, but should also be in proportion to the lady and not look like a pimple on an elephant!”

So do fashions change much over the seasons?

According to Jan, big hats are coming back, with the influence of the television programme Downton Abbey leading women to wear hats inspired by that era.

Clare has noticed the changes in fashion too. “It has been the pillbox hat for the last couple of years but things are going back to the bigger hat. The range is really varied with styles from the 60’s and 70’s right through to really modern.”

“Crowns are becoming higher and brims are shorter,” Jenny added. “ Feathers were popular for a long while but now hats have feathers, flowers and veiling, and crystals that are used as sparkling embellishments. They can match the wearers jewellery too”.

All the hat ladies agree that most of us wear hats badly,

“Women pick it up and pull it on like a sunhat,” smiled Jenny. “ A hat should be forward at an angle but with a hint of mystery. Sit the hat square on your head, pull it a fraction forward, and tilt it.”

Clare’s best advice is not to buy a hat from a department store because you will feel self-conscious,  “Choosing a hat should be fun. You should be wearing your outfit and be ready to have  laugh and try on lots of hats – even ones you would never have dreamt of choosing.”

“The Queen always wears a nice off-the face hat so that the public can see her – and that’s a tip for mothers-of-the bride too”, said Jan.

“It is more flattering and doesn't cast a shadow over your face”, added Jenny. “ It is easier to kiss at wedding as well!”

So should we buy or hire our Big Occasion hat?

“Hiring a hat costs a fraction of the cost of buying one, so you can choose a more expensive hat which doesn't then sit wasted in a box in the loft,” said Jan.

“I think 75% of our hats are hired”, Jenny added. “They cost about £300-£350 to buy so most people only buy one if they can use it on several occasions: to the races, a wedding and a garden party.”

“People don’t like to spend a lot on a hat they may not wear again – it isn't like a £200-£300 pair of shoes,”  Clare agreed. “If you choose something a bit whacky that is great – but everyone will remember it so you won’t want to wear it again. I think 70% of my hats are hired….but often people fall in love with their hat and pay the extra so they can keep it!”

The days may be long gone when a woman wouldn't go out of her home without wearing a hat but, for those Special Occasions, wearing one really makes you feel good and, if it is a hired hat, won’t stretch the budget too far either!