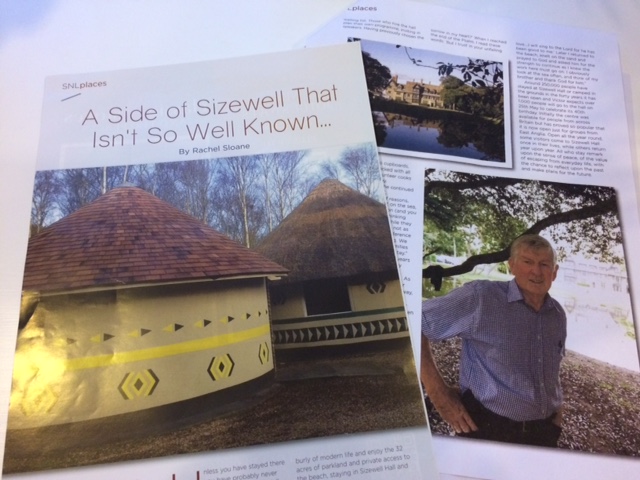 A side of Sizewell that isn’t so well-known…..

Most people hear the name “Sizewell" and just think of a nuclear power station but, as well as small village, one of the east coast’s hidden gems is also located there. Unless you have stayed there you have probably never heard of the Sizewell Hall Christian Conference Centre and Camp site, which opened forty years ago this summer.

Throughout the year ecumenical groups of all ages, come from Norfolk, Suffolk and Essex, to hold a conference or just spend time away from the hurly burly of modern life and enjoy the 32 acres of parkland and private access to the beach, staying in Sizewell Hall was destroyed by a fire and or the camp site.

I was shown around by Victor Jack , who in 1975, after working at Christian festivals with American evangelist Billy Graham in the 1960’s, was searching for a base,

“We had been running house parties and summer camps at Culford School near Bury St Edmunds but I felt there was a need for something that was open all the year round, “ he explained to me. “I must have been on the lists of twenty different estate agents but there was nothing suitable. Then a lady who had painted a picture of Sizewell Hall told me about this neglected house with its beach and overgrown garden”.

The family home of the Ogilvie’s, after being a boarding school, it had been empty for thirteen years. They were happy to let Victor have the site, rent free for the first three years, if he and his team of volunteers did the restoration that was required,

“When I signed the lease,in the Angel Hotel in Bury St Edmunds, the family had no idea that all I had was £40 in the bank!” laughed Victor. “The house was just an empty shell. Every weekend 70-80 volunteers would come to do the work that was required, from cutting back the woods to putting in fire doors. The structure of the building was sound but we had to decorate the house top to bottom. It was hard work but great fun!”

The groups who use the hall and campsite pay a modest fee and are self-catering so it is economical to run, but any project like this takes cash,

“We have never held any large fundraising events and we have never been in debt.  Apart from a few grants, all the money we have needed over the years has come from donations from youth groups, churches and individuals. We pray for the money we need, and it arrives.”

On the day that I visited Sizewell Hall, it was quite quiet as many of those staying were still out sightseeing. The teenagers were just back from a day at Pleasurewood Hills theme park, laughing as they lolled around on comfy faded sofas or played pool or table tennis. In the kitchen, the volunteers prepared the evening meal for those staying in the thirty five bedrooms and, in the panelled oak dining room, tables were laid ready for when 84 people would come together to enjoy the meal. I was shown the comfortable bedrooms and nearby bathrooms, and explored the library, lounge, games rooms, gift shop and the large meeting room, where an electric keyboard and drum kit were available for groups to use, and audio-visual equipment awaited presentations from visiting speakers or discussion groups.

At the campsite that caters for up to eighty people, tents were pitched, families were playing board games at tables in the dining area and others were cooking the evening meal in the communal kitchen. In the playground and woods the younger children were creating their own adventures, and teenagers and young adults were playing a noisy game of volleyball in the sports hall.

A woodland trail leads to the biggest surprise of all: an African village built to be used during the week by the school parties staying at the hall,

“This is a joint project with the Ipswich Christian Youth Ministry,’ explained Victor. “The children take turns to sleep in the African huts and recreate life in an African village, grinding corn and filtering water.  It fits into the national curriculum and is so popular we have to restrict it to Suffolk schools only,”

The Hall is also fully booked through the year with forty church groups on the waiting list. Those who hire the hall, plan their own programme, inviting in speakers. Having previously chosen the menus, groups arrive at Sizewell Hall to cupboards, fridges and freezers stocked with all the ingredients their volunteer cooks will need during their stay.

I asked Victor about the continued popularity of Sizewell Hall?

“There are a number of reasons, including its situation right on the sea which is always an attraction (and you often see people walking, thinking and praying on the beach while they are here) and, of course, it is not as expensive as many other conference centres.”

Last year Victor marked 50 years of preaching, but his main legacy must be the Sizewell Christian Conference Centre and Campsite. As we sat on the terrace, looking over the North Sea just a few metres away,  he told me of the terrible time when,  in 1981, his brother drowned the day after a thanksgiving service was held at Sizewell Hall to celebrate the work of the volunteers and all that had been achieved. It was terrible time, so was he tempted to walk away from the Hall and its work?

“My oldest son was swimming and had an asthma attack. While I was caring for him, my brother who’d also been swimming, disappeared. Afterwards I drove home, devastated, but a friendtold me to read the Book of Psalms, and the words of Psalm 13 were especially appropriate. 'How long must I wrestle with my thoughts and every day have sorrow in my heart?' When I reached the end of the Psalm, I read these words, 'But I trust in your unfailing love…I will sing to the Lord for he has been good to me.' Later I returned to the beach, knelt on the sand and prayed to God and asked him for the strength to continue as I knew the work here must go on. I obviously look at the sea often, and think of my brother and thank God for him.”

Around 250,000 people have stayed at Sizewell Hall or camped in the grounds in the forty years it has been open and Victor expects over 1,000 people will go to the hall in May to celebrate its 40th birthday.  Initially it was available for people from across Britain but has proven so popular that it is now open just for groups from East Anglia.  Open all the year round, some visitors only come to Sizewell Hall once in their lives, while others return year upon year. All who stay remark upon the sense of peace, of the value of escaping from everyday life, with the chance to reflect upon the past and make plans for the future.