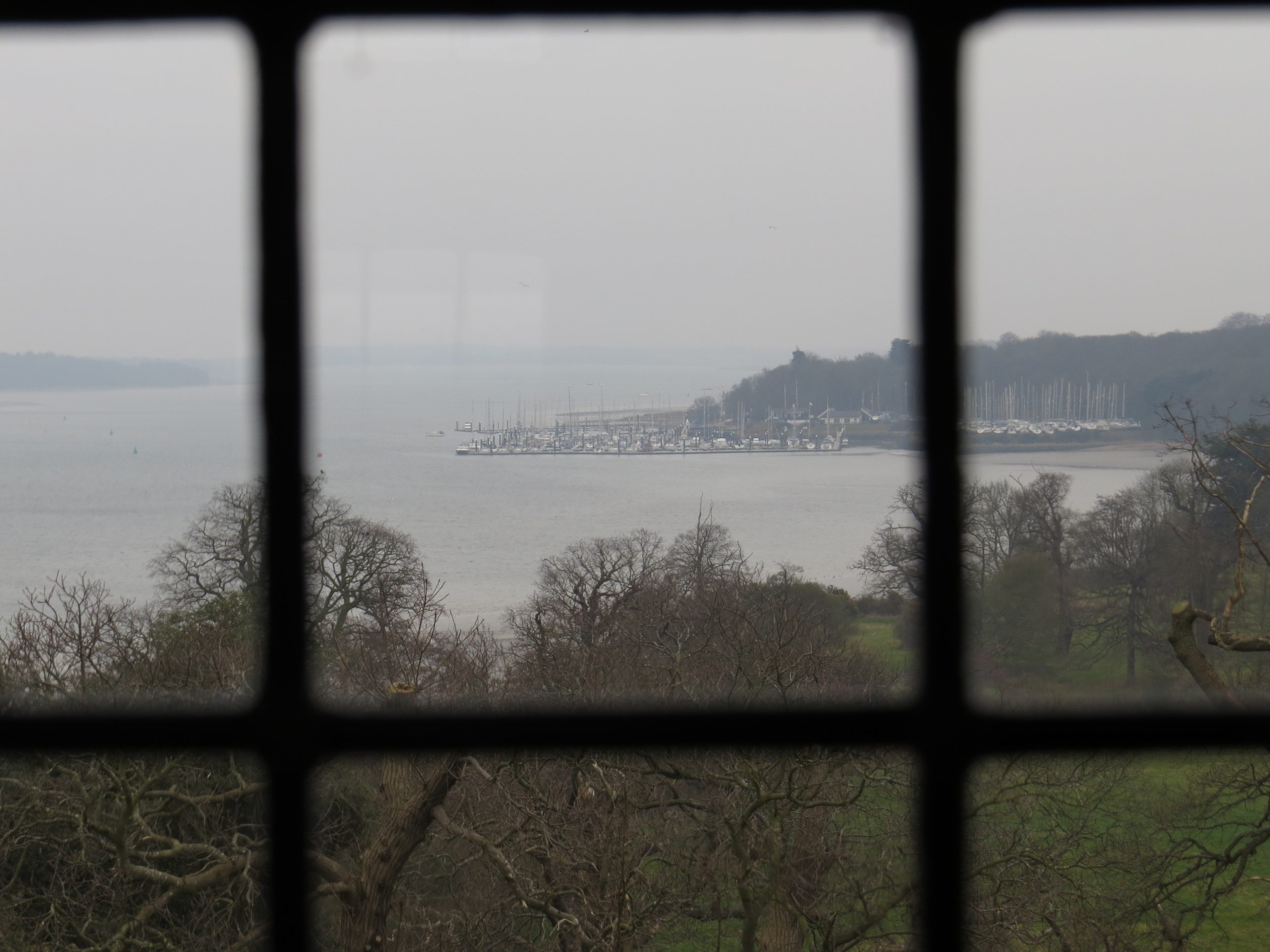 Trying out a Landmark

Left home at 4.06 and arrived at our Landmark Trust holiday home at 4.32. You do not need to travel far to have an adventure and escape the rat-race! This was the chance to stay in a six-storey Tudor tower, a folly I see every time I drive down the A14 and cross the River Orwell from my home in Felixstowe. In the sunshine Freston Tower stood silhouetted against a sparkling River Orwell…

Carrying food and clothes up 65 stairs (88 to the roof), it struck me that this was going to be a weekend of unexpected exercise. The square tower had a single room on each floor starting with the boot room, then the well equipped kitchen/diner, up to the bathroom (with a power shower) and a second separate WC, before the first bedroom with twin beds. Next were the double bedroom and then the sitting room. Each room (apart from kitchen and bathroom floors) opened directly from the open wooden stairs.

The sitting room had four comfortable armchairs each facing into the centre with some cosy knee-room, a bookshelf of local books and a chest of jigsaws.

There is no TV, radio or wifi in a Landmark but what they all have in common is a Log Book where previous visitors record their experiences and make recommendations of where to go and what to do. As a local, it was fascinating to read the words of people from all over the UK and from abroad reporting on their exciting visits to Framingham Castle, Christchurch Park, Ipswich Museum and Felixstowe, Aldeburgh and Southwold!

Two friends arrived for a brief visit and, apart from being “challenged” by the stairs and the height from the roof terrace, were very impressed by the facilities and cleanliness of FrestonTower. Our son and adult grandson (who has special needs) arrived to stay for one night and the look on Ben’s face when he saw where he was to stay was priceless! After a very nervous climb and then descent from the roof, Ben stuck to his bedroom and the kitchen.

We enjoyed lunch and shopping for provisions at one of our regular haunts, the Suffolk Food Hall, five minutes drive away (highly recommended by “Landmarkers” reporting in the Log Book). Back at the Tower there was conversation and laughter, and a supper of biscuits, cheese and wine. The evening ended with a photo session, of the lit windows of the tower, from outside in the dark.

Croissants and coffee for breakfast, and our two guests left, planning to return later with the younger grandchildren who couldn’t be left out of the adventure and wanted to see “Rapunzel’s” tower. It was too cold and wet to do the recommended walk to Pinmill so we took a short car journey to the Ipswich Waterfront and enjoyed coffee and a view of the marina, from Coffee Link, next to the university.

Two very excited granddaughters  (aged 7 and 9) arrived ready to do the “Stairs Olympics”, invented by one of the first Landmarkers who stayed in Freston Tower in 2005 and faithfully reported in the Log Book by every visitor since. It took them 27.48 and 30.55 seconds to run from the front door up to the trapdoor on to the roof! (We grandparents were referee and timekeeper!)

A quick tidy up, carrying the bags back down 65 stairs, packed the car and then the short drive back to home and work.

The adventure was over – but highly recommended!

(Monday evening was spent on-line, dreaming of other Landmark Adventures to come…

The article was first published in Suffolk Norfolk Life magazine, May 2015.