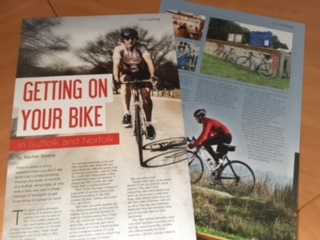 Getting on Your Bike in Norfolk and Suffolk

There is rarely a sunny weekend when you don't see lycra-clad cyclists peddling through the lanes of Norfolk and Suffolk. Amazingly, at one time a bike was just a cheap method of transport to get from home to school or work.

The West Suffolk Wheelers, the Bury St Edmunds based cycling club was formed in 1922, long before hydraulic disc road brakes and carbon wheels had been thought of. As their membership secretary, Peter Heath explained to me, cycle rides in 1922 were very different,

“They would ride all day, stopping for morning elevenses, lunch and then tea and cake. Now, with our busy lifestyles, rides are usually held on Sunday mornings ….and we head for a café that makes great coffee and delicious cake,” he laughed. “I always say that cyclists are cake-lovers with a cycling problem!”

Peter thinks the huge increase in popularity of cycling comes from Britain’s successes in the 2012 London Olympic Games and in the Tour de France,

“But there are other reasons too. The raised awareness of the need for healthy living and the benefits of exercise. People realise that if they live say, within ten miles of their work they can actually get there more easily on a bike. Added to that is the increased number of cycle paths and railway stations now have secure storage for bikes.”

But why join a club?

“People who have cycled alone decide to join our club for social reasons. They learn what interesting rides that are available and some go on to race in road time trials, track racing cyclo-cross etc. We have many members who join us when they get into triathlons, especially now our members have use of a private lake for wild swimming.”

The West Suffolk Wheelers have over 400 members including many families, and around fifty children also attend weekly Go-Ride sessions, a British Cycling initiative.

Across our two counties the humble bike shop, in times past run by a man with greasy hands and a spanner, has had a transformation. As cyclists like cake and good coffee, what better idea than to combine the idea of a bike shop with a café?

Barry Denny, a past Chairman of the West Suffolk Wheelers, saw the potential and, with his son Matthew, has set up Maglia Rosso,an independent cycle shop and licensed Cafe at Hawstead, Suffolk, two and a half miles outside Bury St Edmunds.

“We came up with the idea of a “destination” shop/café and then Metcalfe Arms pub came on the market and we could see that it was what we were looking for”, Barry recalled. “It is on a quiet road and we have a bike shop, a very nice café, a car park and a five-acre field which we have turned into cyclo-cross track, which as a winter sport, helps us when we are so weather-dependent.”

The name, Maglia Rosso, is Italian for the “Red Jersey” awarded in the Tour of Italy cycle race, and reflects the Italian bikes that Barry and Matt sell in their shop. They have maps of routes for the area from five to fifty miles long.

“Cycling isn’t just for ‘Middle-aged Men in Lycra’, as the media have named us,” asserted Barry. “We have six women here today who have had coffee, left their cars on the car park and headed out on their bikes. As we have quiet country lanes all around us, we have many families who come here with their bikes.”

The idea of a combined coffee bar and bike shop inspired

“It had actually been Matt’s ambition to open a cycle-cafe, many moons ago, being a cyclist and lover of coffee’” explained Kayleigh. “It is very popular with both cyclists and non cyclists but we actually opened Dandy Horse for selfish reasons. Loving coffee and cycling we wanted to open a place to meet like minded people.”

But which comes first, coffee or the bikes?

“They are both as important than the other! We take our bike building, servicing and coffee making extremely seriously. If we don’t, how can our customers enjoy both?”

“We specialise in vintage steel and we buy unique products that are not available everywhere else locally. Currently we are in the progress of building Dandy Horses’ brother business ‘thoroughbred’ and will be building custom frames, launching in 2017.”

With the bike shops of Suffolk and Norfolk selling shiny new bikes for the thousands of new enthusiasts for the sport, why did Matt Murphy decide, five years ago, to set up CycleRecycle, in Kessingland, Suffolk?

"I studied Environmental Protection and Conservation Management for my degree but came into this by accident. As a cyclist I had loads of spare parts and needed more space, so sold them on an auction website. I then advertised for old bikes I could take apart and sell and it grew from there. Thousands of old bikes are crushed and sent to landfill sites and that is such a waste!” Matt said, passionately.

In 2011 Matt found the ideal shop for his growing business and, with just £40 in the bank, opened his doors to hire bikes, sell new bike and spare parts, but more crucially, recycled and restored second-hand bicycles and spares.

“Somehow the idea has developed that bikes are disposal items. I offer choice. I can sell some-one the latest Rayleigh parts if that is what they want, but can also offer a reconditioned second-hand chain set and pedals to keep their bike on the road for very little money. They can pay £40 or £90 for a bike that would cost them £150 or £300 if it was new. The quality of the bike they end up with is far better than a cheap new bike, costing £100.”

Many of Matt’s customers have a similar environmental outlook as himself, but there are also many who are down on their luck, have had an expensive bike stolen, have lost their job, or need a cheap bike for work or school. Matt is now looking to franchise his ideas to other environmentally-friendly, cycling business entrepreneurs.

“I’d like to run a couple of pilots in the Suffolk Coastal and Gt Yarmouth districts and then extend across the UK. My aim is to have 400 franchises of CyceRecycle throughout the UK. – and then I will go and live in luxury on a tropical island!” he laughed.

The lanes of Suffolk and Norfolk await so, even if you don't fancy the lycra and your bike is a rather rusty old wreck, grab some cycle clips, and get pedalling!

What advice do our cycling professionals give to new or returning cyclists?

Ride little and often. Three miles a day will ache less than twenty miles in one day. (Matt Murphy, CycleRecycle)

Start gently and find a comfortable saddle. Most cyclists have a store of discarded saddles in their sheds! (Peter Heath, West Suffolk Wheelers)

Always keep your bike maintained. At the end of the day they are modes of transport that need to be looked after to keep everyone safe. Regular check ups at a local bike shop will stop major problems in the future. (Kayleigh Jowers, Dandy Horse)

Do it! It’s a non-impact sport that you can enjoy as you get older and is much kinder on your knees that running or football. Also, buy a good bike. There are some horrible £100 bikes around that are too heavy and will put you off cycling. (Barry Denny, Maglia Rosso)