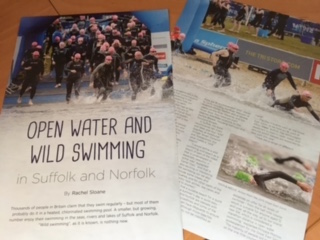 Thousands of people in Britain claim that they swim regularly – but most of them probably do it in a heated, chlorinated swimming pool. A smaller, but growing, number enjoy their swimming in the seas, rivers and lakes of Suffolk and Norfolk. “Wild swimming”, as it is known, is nothing new. It was what our ancestors did in the days before the first swimming pool had been built. Splashing in the local river was probably how our grandparents learnt to swim.It is easy to assume that river or lake swimming isn’t allowed in this era of health and safety rules, but Daniel Start, author of Wild Swimming and Hidden Beaches, reassured me that, with a few basic rules, it is perfectly legal,

“We would recommend that people are always respectful of fishermen and landowners when swimming, and avoid any places which are not on a public footpath. If asked not to swim by a landowner, then leave the water politely. That said, any river which is navigable, or was once navigable, is legal to swim in, as is any tidal section of an estuary (so generally most places along the Stour, Deben, Iken, Blyth and Waveney (the latter being my favourite).”

“In terms of safety, we consider inland waters to be safer than the sea (fewer currents) but a) watch out for the cold, it can sap your stretch if you are not used to wild swimming so stay close to the shore while you work out your limits and don't try and swim across a large lake, b) stay away from big weirs and river in floods (currents) and c) stay out of canals and urban rivers (due to the water quality).”

According to Daniel’s book, “Wild Guide, Southern and Eastern England” there are 18 recommended “wild” places to swim, including the River Wensum at Swanton Morley, Norfolk and at several places on the River Waveney and the Rover Bure. Also listed are eight beaches and three locations on the Norfolk Broads, including Salhouse and Rockland Broads.

In Suffolk, the book recommends ten rivers and lakes and four “wild” beaches, at Aldeburgh, Shingle Street, Dunwich and Walberswick, but what makes a “wild” beach?

“I would define a wild swimming wild beach as a beach of part of the coast that is undeveloped or especially beautiful in some way,” explained Daniel Start, “and that is also exciting or interesting for swimming (so we also include some creeks and estuaries, and for other parts of the country rock arches, sea caves and place to snorkel).”

To find a suitable beach for a quick dip on a summers day is quite easy – Suffolk and Norfolk are blessed with beautiful coastlines and some of the beaches even have lifeguards to ensure our safety, although those beaches could probably not be classified as “wild”.

The rise in events such as the Great East Swim, to be held on 18 June at Alton Water, Suffolk, has encouraged swimmers to train in open water, and around 3,000 people are expected to take part this year.

“There are a range of different distances on offer for all levels of swimmer – from the half mile course which is suitable for anyone aged 12 and over, all the way up to our brand new 10K which is considered a marathon distance in open water swimming,” explained Philippa Morrow, spokesperson for the Great East Swim. “The majority of people will be taking on the one mile course which is the equivalent of about 64 lengths of a normal 25m pool.

But why do they do it?

“People take part in the Great East Swim for lots of reasons, some are raising money for charity, some are doing it to stay fit or train for triathlon, but the majority do it for a personal challenge, completing an open water swim gives them a real sense of achievement,” she continued. “Lots of participants are very evangelical about open water swimming – being in the water without chlorine or lanes and in a beautiful setting like Alton Water is an unforgettable experience!”

Whether it is to train for an event such as the Great East Swim, or just as a means of getting and keeping fit, there are more and more serious sea swimmers, donning wetsuits to swim all the year around.

Even in the depths of a winter weekend, strollers on Felixstowe Promenade, enjoy watching a group of intrepid swimmers, some not even wearing wet suits, as they swim from the group’s beach hut to the pier and back, a distance of 2,500 metres.

Wrapped in towels and warm dressing gowns, they huddle together, post-swim, outside their hut, laughing as they eat cake and drink hot chocolate! Seamus Bennett, who set up the Felixstowe Swimscapes Open Water Swimming group, explained who comes along,

“All sorts of people! We have over 300 Facebook group members. Even in winter there are usually 15-18 swimmers on a Saturday morning; in summer, it's double that. It's all adults (any under 18s must come with parent) and mainly over 30s, with quite a lot in their 50s and 60s.”

“Slightly more than half of our regular swimmers are women, which is typical for (open water) swimming – a very gender balanced sport,” he explained. “We don't all wear wetsuits and welcome all whether they wear them or not. One of our female members, from Ipswich completed an official Ice Mile last month (a mile, no wetsuit, below 5C water) – only about 100 people worldwide have done this.”

So, outdoor swimming sounds wonderful, but if you are not brave enough to venture into the chilly waves of the sea, nor the reedy water of a river, there are always the outdoor pools or lidos of Suffolk and Norfolk to enjoy…. And Beccles Lido is even heated!