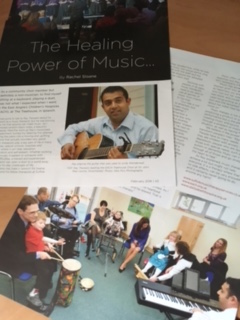 The Healing Power of Music

As a community choir member but definitely a non-musician, to find myself sitting at a keyboard, playing a duet, was not what I expected when I went to the East Anglia’s Children’s Hospices (EACH), at The Treehouse, in Ipswich.

I had gone to talk to Ray Travasso about his work as a music therapist, but he was proving to me that anyone can make music. As I pressed random black notes, a beautiful melody filled the room as Ray’s improvised accompaniment, turned my faltering first attempt at playing the piano into a moving and uplifting experience that actually sounded very good!

Music therapists play a key part of life in many care homes, special schools, hospitals and hospices, where it can help relaxation, communication and self-esteem. Whether working with a terminally ill patient or some-one with learning difficulties a trained and experienced music therapist can open a door to a world away from the day to day challenges of life.

Ray Travasso has lived in Ipswich for twelve years but he, and his fellow therapists at Suffolk Music Therapy Services, work across Norfolk, Suffolk and beyond.

Although he gained an engineering degree, Ray soon realised that it was not the career he wanted and, after working for a couple of years as a church youth leader, at an Essex centre run by nuns, Ray left with the dream of getting a record deal for his band,

“It was while I was hoping for the band to be successful that I earned some money working in a school as an admin’ assistant, doing things like photocopying. It was a tough school with a lot of gun culture and some gun crime. One day the head teacher came in and said the music teacher was off sick after being bullied by the children. I said that, although I wasn't a music teacher, I’d be happy to work with some of those affected children.

“For a few months I worked with these young people, we wrote songs and made recordings. By getting involved with music something changed in them. Their behavior was changing and how the teachers and their peers viewed them was changing as well. It was at that point I realised I was getting more out of seeing them getting on stage, than doing it myself.”

After taking a two year Masters degree as a Registered Music Therapist, Ray moved to Ipswich, with Jenny, his health visitor wife, to take up a contract for six hours a week, at the original children’s hospice in the town.

“That became two days a week, with another two days at the adult hospice, St Elizabeth Hospice, next door.”

Twelve years later, Ray works at The Treehouse (part of East Anglia’s Children’s Hospices) three days a week, working with staff, patients and their families in a music studio he designed himself, that was admired by the Duchess of Cambridge in 2014, when she officially opened the Treehouse. Now with a young family of their own, Ray and Jenny run Suffolk Music Therapy Services, with a team of eight therapists working from Chigwell in North London to Great Yarmouth in Norfolk.

All the music therapy, whether in a small groups, or in a one-to-one session, works on the basis that all humans are musical. A suitable room and some instruments are all that is needed, so how does it work?

“We are all born with an innate sense of, and response to, music. It doesn't matter which country you are from, what language you speak, what needs you have, what traumatic brain injury you’ve suffered, whether you have end-stage dementia or are new-born. We all respond to music.  We have that heartbeat, that rhythm, that pulse, that is within us even before we are born, and it is the last thing to go.”

Ray explained that whether we are tapping our foot to the music on the radio, or beating a rhythm on a dashboard of a car, we are having a physical response to music. We also, of course, have an emotional response to the music we hear whether it brings a tear in our eye or a smile to our face. He explained more about the power of music,

“Music can accompany our emotions and affect our emotions. The whole brain is triggered by music so that tells us that affected pathways, or dormant pathways that might be affected by brain injury, autism, neurological conditions such as cerebral palsy, and dementia can be triggered. People who are unable to do things, sometimes can through music. Someone with dementia without meaningful communication, will suddenly be able to sing a whole song! Music is also a social thing, with community choirs, quartets, bands, and orchestras. Finally, music and sound is part of all the world religions.”

“As a therapist I need to be aware of the needs of the individual in front of me, and to consider how to address those needs.”

Remembering a resident in a care home Ray recalled how, while he was playing music, she would dance, sing and laugh with the staff, but the moment he stopped she retreated back into her silent shell.

Working with people of all ages, music therapists need to be able to use all genres of music from chants to hip-hop.

“Our role is not to entertain, but make music together. I remember a young boy who was a severely damaged “shaken-baby”. He had no facial expression, no verbal skills and no movement, and spent much of his time sitting on the lap of a nurse. When he was fifteen, in sheer desperation after trying many things, I took his hand and sung to him on the beat of his pulse. We were making music together, on two completely unconscious levels. He produced the beat and I produced the melody. I slowly began to increase the tempo of the melody as I sang, and his pulse began to increase in incremental stages. He turned his head, looked straight into my eyes and smiled. As I then slowed down, his heartbeat slowed too and he relaxed. That is music therapy.”

Music often creates an emotional response, but Ray stresses that that isn’t necessarily a bad thing,

"Music has always been able to express grief, loss and sadness, as well as happiness, joy and hope. I saw a girl who had lost her sister and she  said she was stuck, and couldn't move on. We used song-writing as a music therapy tool and she remarked that her song, about her sister, had helped her to move on.”

Music therapy is not about producing a product or an end performance but is the process of creating music and sound, working through a problem or improving a situation, as well as having fun.

“We believe in the power of music to transform peoples lives,” Ray continued. “People have so many needs, whether they are children with anxiety issues, depression, people who are dying or those with special needs, such as autism or dementia. Music can cut through all of those and go straight to the heart to heal.”

As Ray explained, music therapy can achieve a lot but might not help everyone. It is a therapy where there are no side effects, can be very enjoyable and is certainly never going to do anyone any harm!