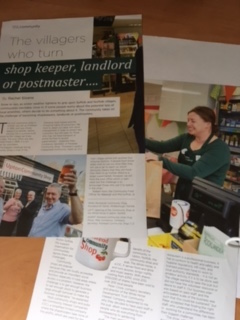 The Villagers who turn shopkeeper, landlord or postmaster.

Snow or rain, as winter weather tightens its grip upon Suffolk and Norfolk villages, communities inevitably close in. If some people worry about the potential loss of local amenities others decide to do something about it. The community takes on the challenge of becoming shopkeepers, landlords or postmasters.

The first community shop in Suffolk was set up Polstead in 1983, and was initially based in a caravan, before moving into a purpose built extension to the village hall three years later. The post office was also relocated there in 1999. It is run entirely by volunteers,

“The biggest challenge facing community shops is that of the changing retail market and the shopping habits of consumers. We have to adapt our ideas with stock management in order to attract new customers, but still cater for those who may not have transport or online facilities to access supermarkets, “explained Mike Constance, Secretary of Polstead Community Shop. “Polstead is quite a widespread community made up of a main village centre with another four outlying districts. If people from those areas wish to use our shop then they will use a car to reach us which obviously means that they are more than likely to go further afield to a larger supermarket. However we still have the post office which is well-used, but the challenge is to encourage those who use it to spend in the shop.”

“Community shops are popular because they are locally accessible and provide an important social function, especially in rural areas where access is a problem. However, the challenge is to get enough business, to sell enough stock to generate a large enough turnover to make the business sustainable”, he explained.

Most community shops and pubs are Community Interest Companies (CIC), a simplified limited company where the shareholders take none of the profits, which are used for the benefit of the community. In Upton, Norfolk, the community shop and pub, The White Horse, is a CIC. It serves food and drink and runs quizzes, bingo nights, and music events. With shares costing from £250, since 2012, £100,000 of shares have been sold to over 200 local people.

Peter Crook, company secretary and director, of the White Horse Development Trust Community Interest Company, explained to me why they decided to have paid staff in the pub, albeit supported by local people who do everything from bookkeeping to gardening,

“The main reason to go with paid staff was the early recognition that running a successful pub and restaurant is a professional business. It has to conform to health and safety and hygiene regulations, HR rules and licensed premises have to work to local authority standards – it is not an amateur activity if it is to be done well. The village wanted to save the pub but did not have the volunteer resource or desire to staff it. Our business plan was based on paid staff and the anticipated scale of the business was such that this could be sustained,” but Peter accepted that finding the right staff, who understand the differences in  working for a committee, has been their biggest challenge.

“The shop, which was opened in April 2015, is run mainly by volunteers. It is open seven days a week from 8.00 am to 6.00 pm and has a committee member overseeing it and doing much of the buying. We have a paid co-coordinator (20 hours per week) and the rest of the time a pool of some 25 volunteers do two hour shifts, and this works. We knew the shop would not sustain paid staff – it was always seen as a service to the community rather than a profit centre.”

Another community pub is The Punchbowl at Battisford, Suffolk, but how well supported is it?

“Very well!” said Bryan Hilton, who is Director of the Punch Bowl Community Inn CIC,  “Our customers come from any of the local villages, and some from Stowmarket, Needham and Hadleigh. We have monthly events, on Tuesday evenings.  These range from music, an afternoon Tea and Chat, Pub Quiz, and occasional drama evenings using a theatre group linked to us by Creative Arts East.  In the summer we have BBQ’s, bowling in the garden and, in August, a big Beer Festival. They all seem to attract a lot of interest.”

But what happens when the initial enthusiasm for a community shop or pub cools?

“I would say one of the biggest challenges they face is that of sustainability”, agreed Hannah Reid, Senior Development Officer – VCS Economy & Enterprise for Community Action Suffolk.  “Often with pubs, the desire comes from a strong local passion and drive to ‘save’ the local pub, and therefore timescales are quite short for them to plan and find the expertise/skills it takes to take on and maintain such a venture. It can be very hard work for little reward initially and requires robust business planning and often a fair bit of capital to put into it. Finding the capital is also very hard work – the misconception often being that selling shares to the community will be enough.”

Jon Clemo, the Chief Executive of Community Action Norfolk thinks, for all the challenges, the effort is worthwhile….

‘”It’s really important that communities have a hub, whether it’s the village pub, shop, community hall or church. Modern society is highly mobile, and people are able to travel to access facilities – but if these are available in their village or market town, then rural communities can continue to flourish as real centres of social activity,” he explained. “It’s about the eyes and ears of the community, people helping each other and participating in where they live.”

Does having a community shop or pub really make that much difference to a village? Peter Crook from Upton is convinced it does,

“It has transformed the community by putting a central ‘heart’ into the village. The shop is a social meeting centre – people gather for coffee and a chat at most times of the day. Our older residents can now shop locally as can children. Until the shop opened, the nearest shop was a five mile round trip away. The village would have lost the pub if we had not acquired it, since a commercial buyer could not be found at the time. It is an accepted fact that a pub in a village adds around £12,000 to the value of the average village house.”

There are eight community-run post office branches in Norfolk and Suffolk (five in Suffolk and three in Norfolk) and more are being discussed, but where else is this drive for community enterprises going to lead in the future?

In Upton they have big plans,

“We are hoping to transform a barn into a B&B and a holiday let. We want to build a bigger restaurant and a new cellar, we are hoping to add a shower block (for Broads boating tourists and campers) and a launderette,” said Peter Crook at Upton.

When you look at these, and other examples in Norfolk and Suffolk, rural life seems to be being transformed, thanks to the enthusiasm and hard work of people who love their village.

Advice to other communities from the Punchbowl, Battisford, Suffolk:

We are now in our 5th year, and have been invited to speak to several PCC’s and potential shareholders in other villages, where we have shared our experiences.

–      In the working group, do you have anyone who knows about running a small business and preferably a hospitality business?

–      It is DARNED hard work, even if a manager is employed.   (But customer satisfaction is very rewarding )

–      We lease the Punch Bowl, which circumvented the need to raise a very large cash sum.   In these days, it is against the odds to generate a worthwhile return on money invested in a freehold.

–      Test their real level of commitment

–      Check what level of support you can expect as volunteer labour; and get commitments

–      Gain the benefits of becoming a Community Interest Company, and carefully appoint say, five directors.   (Anyway you cannot borrow money or get grants if you are not a legal entity.)

–      Set achievable targets, and be prepared to pull out if there are no early signs that it’ll be viable.

–      If food is being offered, a professional chef is a prerequisite – ours is French!!

Get more help from: