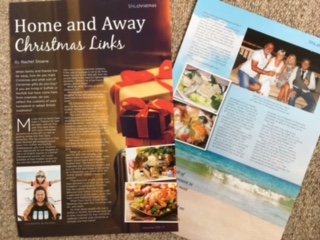 Home and Away Christmas Links

When family and friends live far away, how do you mark Christmas and what sort of Christmas gifts do you buy? If you are living in Suffolk or Norfolk but have come here from overseas, do you reflect the customs of your homeland or adopt British traditions?

My son and his family have lived in Thailand for over ten years and the first year they were there I sent some Felixstowe souvenirs as a joke gift (as well as putting money into their bank accounts). This has continued so they have received gift-wrapped tourist items from Suffolk and Norfolk, Shakespearian gifts from Stratford (very appropriate as our daughter-in-law is an English teacher at a British International school), and recipe booklets of East Anglian recipes for our son who trained as a chef, and now runs a food production company. If the cost of postage is not to be three times the cost of the little gift, then the crucial thing is the need for lightweight presents – hence a lot of tea towels and aprons, and no mugs!

What do other families in similar situations do?

Photographer Paul Nixon, has a son, daughter-in-law and grandson who have lived in the Bahamas for three years.

“On Christmas Day we will be out early on the beach with a glass of bubble,” explained Paul’s son James, or Jim, as his friends know him.

“The most difficult part of living here are presents! If we lived in Miami it would be fine but there’s nothing here to buy the family –  even the cards and wrapping paper are a terrible choice. Christmas shopping here is aimed at expats but its hugely expensive …and it’s much too hot to attempt to eat that kind of food.”

Although Paul and his wife try to visit their son as often as possible, they have never been there at Christmas time ,

“When we visit during the year we take the gifts that will help. They always seem to want Oxo cubes, salad cream, brown sauce and chocolate!’ laughed Paul. “We have to be very organised over Christmas presents and buy tee-shirts and things in the spring as, in December, our shops are in the ‘wrong’ season, selling scarves and jumpers!”

“They buy a lot of gifts online and have delivered to us here, but we have a tradition of exchanging Christmas tree decorations. The ones in the Bahamas have Father Christmas under a palm tree or on the beach, so we buy them more traditional English ones.”

When Paul’s family moved to the Bahamas they took their Christmas tree etc., with them!

So what about people who live in Suffolk or Norfolk, but whose roots are in other countries? Do they choose to celebrate a British style Christmas or recreate one from home?

Armanda Pinho is from Portugal and she told me that they don't have the tradition of sending Christmas cards so, although she sends lots to family and friends back in Portugal, she rarely receives any back,

“There are very few cards sold in Portugal and those that are in the shops are very expensive,” she explains ruefully. “We don't send cards – we visit and exchange hugs!”

Armanda like to recreate a Portuguese Christmas in her Suffolk home.

“Christmas Eve is definitely an important day for families to get together, spend the day cooking and preparing for Christmas. The smell of cinnamon is present in many houses as most traditional Xmas desserts will have cinnamon sprinkled on top. Rabanadas (bread soaked in milk, egg, sugar, cinnamon stick, lemon skin – like a custard mix – then fried) is the most popular desserts over Christmas period. Bolo Rei (The Kings cake) is part of everyone's Christmas – inside there will be a small gift/ token as well as a broad bean – those who find the broad bean must buy the cake next Christmas!

“Most families will have many different desserts set out between Christmas and New Year, so whoever pops in to visit, can have some desserts and port wine.”

“Presents are opened at midnight on Christmas Eve, even the children stay up. Younger children will leave their shoes near the Xmas tree or fire place and will find their presents in the morning too”.

The first year Armanda spent Christmas in the UK was in 2001, and she went to the pub with her new English friends.

“This was not Christmas to me… I called home about midnight and everyone were still celebrating around the table. I was upset that year and promised always to celebrate Christmas on the 24th, Portuguese way. I have never missed another year since.”

“Even though I can actually buy what I need for a Portuguese Christmas meal here in the UK now, my mother still likes to send me a food parcel just before Christmas, with everything I need, including salted cod and Kings Cake!”

Chutney maker Annie Adde, from No-Adde-tives, tries to combine the traditions of her Swedish husband and the Christmases she remembers from a childhood in Suffolk.

“There are two big traditions in the run up to Christmas that we don’t have here, she explained. “A glug party, serving mulled wine, which is held on a Sunday afternoon in December and a church service on the 13th December in commemoration of St Lucia, the bringer of light. A boy dressed as a wizard and a girl dressed in white process, down the church each wearing a crown of lighted candles.”

Like in Portugal, the big meal of Christmas is held on Christmas Eve and includes herring for the first course, known as sill and comes in many marinades.

“Our favourite is mustard with dill.  You can sometimes get them with crayfish which are delicious. This is served with plain boiled potatoes cooked with dill.  Then you move onto the smorgasbord where it is a help yourself affair.

“I serve unsmoked ham with a mix of sticks of potatoes and cream.  We then have red cabbage, prins Korv (small frankfurter like sausages with the ends cut about 1 cm lengthways so when you fry them they split like crowns), meatballs and gravard lax or smoked salmon.

“There are always lots of potatoes and no other vegetables,’ adds Annie. “I have to sneak in some broccoli! You can have Christmas porridge – a thin rice pudding) which you flavour with sugar and cinnamon, but why would you?”

“On Christmas Eve gifts are exchanged and, as Father Christmas is so busy, he has helpers – tomtes. Someone in the family dresses in red and becomes the tomte, (a sort of elf) to give out the presents.”

On Christmas Day with her Swedish husband happy, Anne usually reverts to her English Christmas traditions.

Christmas in Bangkok it is very different to what will happen in Suffolk and Norfolk on 25th December. As Thailand is a Buddhist country, it is a normal day of work. It is only the big shopping centres in the city, and the tourist hotels, that put up decorations. The shops are, however, full of baskets of food and hundreds of pots of poinsettia, which are given as gifts in the days up to New Year.

The ex-pats may plan a big traditional Christmas meal, but it is too hot for a roast dinner and pudding so most, having arranged time off work, will either have headed to a beach or will picnic in a city park.

What gifts will I send to Thailand this year? Christmas decorations and chocolate as usual, but, throughout the year, you will find me in National Trust shops or at the Tourist Information Centres searching for “British” souvenirs that will make my Thai-based family smile but, hopefully, not too homesick at Christmas!