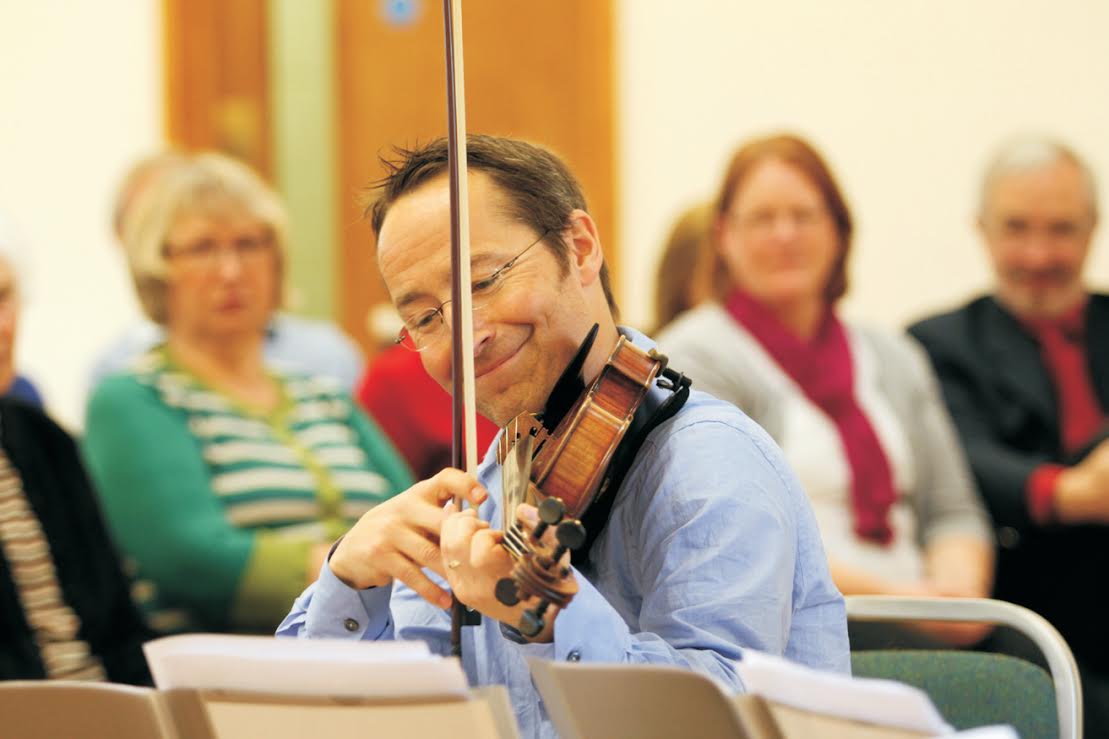 An orchestra for Suffolk

Unusually for a rural county, Suffolk has its own professional orchestra. Four years ago, conductor and musician Leslie Olive, who lives in Rattlesden, Suffolk, decided that the county, with its long tradition of music making, deserved a professional orchestra of its own and founded the Suffolk Philharmonic Orchestra.

Already a well-known choral conductor through his work with Suffolk choirs such as the Stowmarket Chorale and the Eye Bach Choir, Leslie had also conducted The English Arts Chorale, the Royal Philharmonic Orchestra, the London Mozart Players and the English Chamber Orchestra, the London Opera Players and Opera Brava. He also founded, in 1992, the Reigate Summer Music Festival.

“I’ve always been passionate about getting people involved with music either participating or just sitting in the same room as these fabulous players. Then the ideas came together like ducks in a line!” Leslie laughed. “The Apex concert hall in Bury St Edmunds was opening and around that time I was working with Julian Milone, a member of the London’s Philharmonia Orchestra. Chatting in the interval, I said to him that there was so much happening musically in Suffolk, it would be fabulous to have a professional orchestra for the county. To my surprise he said that, if I ever got one going, he would come and play in it! Then, at the end of the week, he phoned me to say he’d been talking to his musician buddies, and they were all terribly interested.”

Shortly afterwards, at another concert, an old pupil of Leslie’s, now a successful merchant banker, was in the audience and hearing of his idea, offered some initial funding for the orchestra. Confident of the support of his choir members, Leslie knew that all the necessary components were in place.

The orchestra was launched in May 2012, in the Bury Festival, with a concert at St Edmundsbury Cathedral. Bringing together a team of enthusiastic supporters, Leslie had enrolled some of the finest professional musicians, many of whom are based in Suffolk.

“There are seven, very active, Trustees and other people who help on the day of a concert,” explained Leslie. “But we have a strict strategy for choosing our musicians. We want to get the best possible standard of musicianship and that comes first, but if they also have Suffolk links they get priority. But the music is always the most important thing.”

Because the orchestra members are all working at a high professional level, usually in London-based orchestras, the Suffolk Philharmonic Orchestra’s concerts have to work around their commitments. This is not a bad thing though, according to Leslie,

“It helps because those who work together already, perhaps in a string section of forty players, know the music and are used to performing together. You see them smiling at each other during a performance and there is a wonderful familiarity between them – and the music.”

One key to attracting financial support for the orchestra was not only that it would mean Suffolk music lovers could enjoy first class concerts without going to London, but also that Leslie’s plans included taking music into smaller communities.

An initial grant from the Arts Council covered the launch of the orchestra, the first concert, the first community concert in Rattlesden village hall and work with music students in the local middle school.

“We have now given fifteen community concerts, where a small group of our musicians go into a village hall and perform. It is all completely free and the audience are fed too; they have lunch or afternoon tea. There is a lot of negative expectation about classical music. People worry about what to wear, how to act, what to say and when to clap. By performing in a village hall we can cut through all that.”

Covering the cost of the orchestra relies upon sponsorship from businesses such as St Edmundsbury Financial Services, Fred.Olsen Cruises, Farthing Funerals, and Barnes Construction, occasional grants from local councils and from organisations such as the D’Oyly Carte Trust, from ‘Friends’ of the orchestra and individual donors.

“The ticket money from a full concert only covers about half of the cost of putting it on. Musicians aren’t particularly well-paid, but if there are fifty of them it mounts up! Plus, you have the venue to pay for, the advertising and so on,” Leslie explained ruefully that much of his time is spent seeking sources of funding.

“Every time we do a community concert we seek to work with the local school too. The teachers decide how they want to use that resource, so the visit is tailored to their school. Children have no negative concept of what a ‘string quartet’ is as some adults do. Children just see four musicians, so are very open to the experience. In education circles what we do is sometimes thought to be a bit old-fashioned, but I think that if just one child comes back five years later and wants to play an instrument, or twenty years later goes to a concert, and we planted that seed, we have changed a life – and that is very worthwhile indeed.”

So what are Leslie’s hopes for the future of the orchestra?

“I would like to see real momentum developing in our main towns, Ipswich and Bury, and in the future Lowestoft too. If we can perform often enough, say four times a year in Bury St Edmunds and twice in Ipswich, then we will stay in people’s consciousness. I would also like to see the Suffolk Philharmonic being of service to music education in the county and to continue to develop our work with schools.”

Cities like Manchester and London have long had their own professional orchestra, but it is unusual for a county to have one. Because of the drive and foresight of one conductor, Suffolk music lovers can now hear the country’s top musicians perform, right on their doorstep.