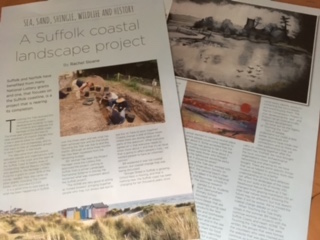 Suffolk and Norfolk have benefited from many National Lottery grants and one, that focusses on the Suffolk coastline, is a project that is nearing its completion.

Touching the Tide received £1m (including some project development funding) to help to conserve and celebrate the heritage of the Suffolk coast.. The three year project’s aim was to raise awareness of coastal change, how it was a special place for wildlife, conservation and archaeology, and to find ways to help all interested groups to work together in the future.

The idea came from discussions between people and organisations with an interest in the coast and the team at the Suffolk Coast & Heaths Area of Outstanding Natural Beauty (AONB), who applied to the Heritage Lottery Fund for a grant to cover 90% of the money needed. Help also came via other grants, including The Crown Estate, who provided £21,000.

It is a good time to look back at what has been happening in Suffolk over the three years and see what has been achieved now and for the future. Touching the Tide was due to end this month, although an extra three months has now been squeezed from the remaining budget.

Bill Jenman has been the Project Manager since the Lottery first approved the project, coming to Suffolk from a similar Landscape Partnership Scheme in Orkney.  He explained what was important about the Suffolk project,

“The AONB are very good at acting as ‘honest brokers’, bringing together people who may not always see eye to eye but do have to work together! Coastal change is one of those issues where there are strong views on all parts of the spectrum. What everyone agrees on is that everyone needs to know more about it and that it’s an issue that is going to affect peoples’ lives… we wanted people to have an informed opinion.”

Bill explained it was not coastal erosion, but coastal change that was being discussed,

“Shingle Street in Suffolk is growing, Orford Ness is moving, and that is nothing new, the Suffolk coast has been changing for ten thousand years, since the end of the Ice Age… and it isn’t going to stop for us! It is about how you manage that process, and how you protect what really needs to be protected, for the future. I describe it as ‘making objectors into players’. If you are willing to hear other peoples’ point of view and negotiate then, in Suffolk more than anywhere else in England, you can be a player, as we are one of the leading places for community-led coastal planning.”

Bill described one project that really illustrated how coastal change is nothing new,

“One of our opening projects was an archaeological dig at Barber’s Point, which is a peninsular on the Alde estuary and is part of Suffolk Wildlife Trust’s Hazlewood Nature Reserve. We knew from past excavations that there was a Saxon cemetery there so, together with the Aldeburgh and District Local History Society, we did a dig there.

“Now, the land-hungry Saxons came here because of rising sea levels in North Germany and Denmark and, at the time, Barber’s Point was an island with mudflats giving it a special isolated feel. They lived here and used the island as a cemetery from the late 500s before abandoning some time after 800AD, probably because it became too soggy as the sea levels rose…Then, in the medieval period, sea walls were built enclosing the marsh and Barber’s Point was turned into farmland. We did the dig in September 2013 partly because there is always the chance that with climate changes and weather patterns, it would be reclaimed by the sea. Low and behold, in December 2013 there was a storm surge and Barber’s Point was flooded and it turned back into an island!”

Over the three years, Touching the Tide has worked on thirty-three different delivery projects, as they are known, and dozens of organisations and thousands of people have been involved. They have funded art projects, new village signs, education projects with schools and with prisoners, developed coastal walks, and helped to protect nesting little terns. They have given grants allowing children with disabilities to go sailing, to build and restore historic memorials, to develop museums and produce street plays. Touching the Tide has held a very successful photography competition, helped to develop the ANB’s voluntary coastal warden scheme, and has created a virtual reality 3D tour of a Martello tower, using the latest gaming technology. That is quite a varied list!

Out of all the projects what are Bill’s favourites? He remembers the Orford Ness lighthouse project as being an outstanding example of what a Landscape Partnership Scheme can do,

“It was devised by a group of local people, who saw there was a problem as the lighthouse was going to be decommissioned, causing a lot of bad feeling in the village, particularly between some of the locals and the National Trust (who own the Ness). The group wanted to create a neutral place where people could come together to talk about it. Some accepted that the lighthouse was going to fall in the sea and nothing could be done about it … and there were those who thought losing the lighthouse would be awful and that it should be saved.”

Touching the Tide also worked with the Marine Conservation Society on Beachwatch, the national beach clean programme, to adapt it to the National Curriculum, and encourage schools to get involved. The winning research carried out by students from Saxmundham Primary School focussed on plastic micro-beads that are increasingly being used in products like face scrubs and toothpaste and so end up down the drain and in the sea where marine creatures mistake them for food. The students identified the need for a phone ‘app’ so shoppers could easily identify products containing the micro-beads, and avoid buying them. The Marine Conservation Project is now developing the ‘app’, and it could be an internationally important development.

So what will be the legacy of Touching the Tide?

“Lots of people understand our coast a little better. Individuals and organisations have made new connections and so there are new partnerships that will carry on working together after the project has finished. .We have brought the local volunteer archaeological organisations closer together, networking and sharing kit we have bought. There are some specific things that we’ve helped to achieve, from new museum displays to a better understanding of how hard defences can affect the landscape of the coast.  We’ve put quite a bit of money into Hazelwood Nature Reserve as it has changed from grazing marshland into an inter-tidal nature reserve, showing the future may be different, but that doesn't mean it will be worse. We’ve moved the coastal change debate on a bit.”