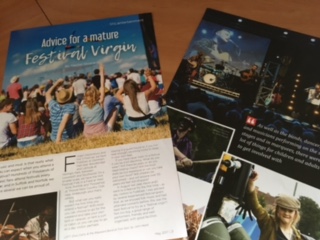 Advice for a Festival Virgin

Music and mud. Is that really what you can expect when you attend a festival? Hundreds of thousands of music fans attend festivals every year and in Suffolk and Norfolk we have several we can be proud of. Forget Glastonbury and the V Festival, we have FolkEast at Glemham Hall near Woodbridge and Latitude at Henham Park, between Lowestoft and Southwold. On a smaller scale, we have the Holt Festival, Folk in a Field at West Acre, Norfolk and ThorpeFest at Thorpe Ness Country Club near Aldeburgh, plus many others.

But what can you really expect the first time you attend a festival? With most you can choose to go for the weekend and take your own tent or caravan, or rent a yurt or cabin, or you can pay to go as a day visitor, perhaps staying in a guest house or, if you live near enough, returning home to sleep in your own bed.

If you have never been to a festival, it can be a bit daunting. What do you wear? Will there be seats or do you need folding chairs? Will the food stalls be too expensive or can you take your own food? Will children be welcomed – and will anyone over 50 years old feel out-of-place?

In August last year, Kevin and I went to a festival for the first time – as day visitors to FolkEast. I was advised by several experienced festival-goers that, as we enjoyed folk music and had attended concerts before, this was the best festival to try as a “festival virgin”! Not too big, a good range of performers, friendly and well-organised, with good facilities.

Clothing: Look at the weather forecast and dress accordingly. Layers are best. Even on a summer’s day, it gets cold when the sun goes down so a large cotton scarf wrapped around your neck will keep you warm – and will be useful so your shoulders don't get burnt in the daytime. (A blanket would have been lovely when it got cold around 10pm, but we would have had to carry it.)

Shoes: I panicked as I had forgotten my wellies and showers were forecast. In the event, we listened to bands in the marquees when it was raining, and the land drained so well that my shoes (better than sandals) stopped my feet from getting soggy from the wet grass. I had tucked a pair of socks in my bag. (I hate cold feet).

Bags: Use a small shoulder bag crossed over your body for money, phone etc and a day bag/small back pack for everything else. If you are not camping (or your tent is a long walk away) you will have to carry everything around.

Food: In the actual festival arena, you buy your food. At FolkEast there was delicious food, lots of it local, and the prices were reasonable. (Chicken, veg and noodle stir-fry cost £6.)

Drinks: There were very popular beer tents and places selling good coffee and cold drinks. We took a bottle of water too.

Chairs: We had folding picnic chairs in the car but didn't use them until almost the end of the night when watching Eliza Carthy and the Wayward Band on the Sunset Stage, the main (open-air) stage. In the marquees, there were chairs or people sat on the ground. There were a good number of picnic tables for when we were eating too.

Attendees: A real mix of ages. Families, including tiny babies, dancing toddlers, playing children, and teenagers strolling and eyeing each other, as teenagers do. Most the attendees were probably in their 40—60’s.

Toilet facilities: Plenty of portable cubicles with antiseptic hand-wash instead of wash basins. They were still clean at the end of Day One and were cleaned each day thereafter. Over the fence on the campsite (camping was free for festival ticket holders) I spotted shower cubicles too.

Entertainment: As well as the bands, dancers and musicians performing on the six stages and in marquees, there were a lot of things for children and adults to get involved with – face-painting, a mud kitchen, crafts, films and workshops. All included in the price.

What I enjoyed the most: Some of the lesser known names we enjoyed as much the well-known acts. Acts such as Tosh Ewin’s band from Beccles, and Rob Harbron and Emma Reid (whom we discovered accidentally when escaping the rain). We also spent ages watching the Morris dancers, whom I’d always thought were ‘more mature’ but at FolkEast groups included teenagers and young adults leaping with great energy. We loved the funkily purple dressed “Pretty Grim Border Morris”.

What we missed:  The art arcade, knitting, story-telling, and workshops – we ran out of time. We nearly missed the most magical stage of all! Just as we were leaving at 11pm, through the trees we spotted some lights and following a woodland path and a willow tunnel, decorated with recycled art, wind-chimes and gentle lights, we found ourselves at the Soapbox Stage, a marquee of cushions and rugs, and the music of Solana, a mix of gypsy, folk, Balkan and world music.

What we learnt: You never get to see everything at a festival – even a smaller one. While you are enjoying one band, there will be another one elsewhere even better! We found, with just one day at FolkEast, it was better to watch half a set, and then move on to another stage and catch half of another musician’s performance. One day isn’t enough.

Would we go again? Definitely – and plan to take friends with us this year!