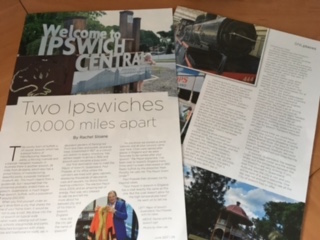 When you find yourself under an hour’s drive from a city that shares the name of your home town, it would be silly not to pay a visit. We drove into the City of Ipswich on typical wide Australian roads, passing out-of-town stores, schools, playgrounds and parks, and detached bungalows with shady verandas and traditional tin roofs, set in abundant gardens of flaming red Poinciana trees and purple Jacaranda trees. Established in 1827 as a convict out-station to quarry limestone, free settlers began to arrive in 1842 and Ipswich soon became a busy port.

Our first destination was to meet the Mayor of Ipswich, Queensland, Paul Pisasale, at his office where the corridors are lined with glass cabinets displaying thousands of decorative cups and saucers, his World Record beating collection. The elected Mayor since 2004, and an amazing ball of energy, Paul was very pleased to see me and tell me more about his beloved city, and of his trips to Ipswich, England.

How did the city get the name of Ipswich?

“As you know we started as penal colonies and all your convicts came over here. Cities were named after places in England and we were fortunate to be named after your Ipswich,” the Mayor explained. “I’ve been over to Ipswich, England many times and I’ve been interviewed on BBC Radio Suffolk by the presenter, Mark Murphy. He calls me ‘The Mayor Down Under’!”

Paul Pisasale then showed me his mayoral robes,

“Your mayor in Ipswich in England has a coat exactly the same as this one. But the coat doesn’t allow for the high temperatures here!”

He went on to tell me more about the city he is so passionate about,

“The population and tourism has gone up 23% and we also have the RAAF Base Amberley here with 8,000 personnel.  Jamie Oliver started his Kitchen here, and it’s because of me that he came to Australia.”

I asked the Mayor what he attributed the city’s success to,

“People! Politicians get elected and forget they are there to represent the people. It’s not about titles and positions but responsibilities. Ipswich is like Ipswich in England; we have lost a lot of industries and we had to reinvent ourselves and we now have a high-tec park. The most important thing is the age average, 32 when the state average is 37, and the cities around us are in the 40’s and 50’s.”

Paul has ensured young people are attracted to Ipswich as a place to live and work, and many return even if they left for college or work.

Education has improved and jobs created from the social and economic opportunities arising through digital technology; a Smart City Program. Ipswich, has been recognised as a global leader in digital innovation, and how it can help communities to live and work.

“Your mayor is more ceremonial,” Paul explained, as he expanded on the differences between the two Ipswich’s, “whereas here it is more like a Board of Directors who run the city – and the salary is different too!  I had my own restaurants and hotels but I went into politics as I wanted to make a difference and see the city run properly, and we have turned it around. The challenge ahead is for even more growth for the city.”

My ten minutes up, Paul shot off, to change into his golf attire (shorts with a kangaroo print) ready to support a charity golf match.

Ipswich is Queensland’s fasted growing city with ambitious targets in job creation (65,000 new jobs by 2041), plenty of land to be developed and increasing success as a tourist destination, including many visitors from Suffolk, UK, according to names I glimpsed in the visitor’s book, at the tourist office.

Following Paul’s advice, we headed to Queen’s Park, one of 500 parks in the city, a haven of grassy banks and shady trees and, apart from the baking sunshine in a temperature of 32 degrees, reminding me a little of Christchurch Park in Ipswich, Suffolk (I was looking for connections between the towns, of course.)

In the Visitor Information Centre, one of the volunteers, when she heard who we had been speaking to, and that we were visiting from the “other” Ipswich, was very enthusiastic of both the Mayor’s achievements and plans for the city, and her own memories of her trip to Ipswich, UK. It seems the desire to experience our town’s namesake works both ways.

Signing the afore-mentioned visitor’s book, we continued our exploration. The two main attractions in the park, the Japanese Garden and the Nature Centre (housing wombats, bilbies and quolls), were closed to visitors as it was a Monday, but one giant lizard, the size of a cat, did cross our path as we strolled to the park’s café for a welcome drink. That is something you don't see in Christchurch Park!

At the Workshops Rail Museum, Australia’s oldest continuously operating railway workshops, another warm welcome from staff and volunteers greeted us. At the entrance, we passed a huge steaming engine and carriages, and then spotted a rather large reminder of Suffolk. On display was a Garrett steam engine, made in Leiston, Suffolk, which was sent to Queensland in 1914.

Health and Safety rules about wearing stout shoes rather than sandals, precluded a tour of the working heart of the museum, the heritage workshops themselves, for at least for two of our party!

While Allan, our Australian-based friend, went on the tour with a camera, we wandered around impressive displays of full-sized steam engines, modern trains, carriages and memorabilia. We had a go at driving, courtesy of the diesel locomotive simulator, but decided we really needed a child with us to properly appreciate the Nippers Railway play area, an exciting child-sized railway station with ticket office, working telephone link to the signal box, cranes, pedal trains etc. An idea for Ipswich Transport Museum perhaps?

Given more time we could have enjoyed the historic buildings around the city, the Riverlink Shopping Centre by the Bremer River, the Ipswich Art Gallery or, thinking of home and the Ipswich Speedway Stadium, we could have gone to the Fastrack Drag Racing Experience.

In Ipswich, Queensland, the weather might have been hotter and the wildlife larger, but the similarities between the two Ipswich’s are very striking.  If you ever find yourself in Queensland, Australia, pay the city a visit and you will be sure of a warm welcome. One day was not enough time to see all the City of Ipswich had to offer.

This article was first published in Suffolk Norfolk Life Magazine in June 2017. www.suffolknorfolklifemagazine.com