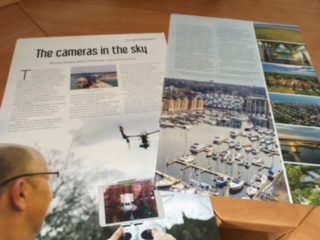 The cameras in the sky

Thousands were given as Christmas gifts in 2016, but the headlines are mainly negative about high flying cameras, mounted on drones. They seem to be  mainly about aircraft near-misses, accidents, loss of privacy and irresponsible “pilots”. However, there is rarely a television news report or newspaper article that isn’t illustrated with spectacular aerial pictures. Where once an expensive helicopter would be needed, now producers and editors can get stunning aerial images much cheaper, by using a drone camera.

So, what is the story behind the drone – or to give them their proper name, ‘unmanned aerial vehicles’.

When not working as a radio presenter, James Hazell has always been keen on photography,

“Years ago we had a remote-control helicopter which was really difficult to fly,” laughed James. “And I always thought, ‘wouldn’t it be good to put a camera on this’ and was waiting for technology to finally achieve mounting a camera on a model helicopter – and eventually it happened!”

Fast forward five years ago, and small drone-mounted cameras became affordable and, having tried one, he was hooked. From that first “hobby” drone, his growing interest and expertise has led to James training as a licensed drone pilot, and the formation of his business, SkyCam East, an aerial imaging company, increasingly employed by businesses, as well as  newspapers, television and film companies.

“The first drone flew… but that's really all they did,” James laughed, as Felix, his son, admitted that he repeatedly lost and crashed their first one. “Now you can programme them, they have air collision avoidance and other features. You can sit with your lap-top and plan a shoot, key it in and press go!”

What is involved in filming or photography from 400 feet overhead?

After first removing the drone, which looks like a four bladed model helicopter with a camera underneath, from a suit-case sized flight case, James and his team (son Felix, and assistant, Rachel) then set up two small laptop computers, where they could view the images that the on-board camera would take. There are two remote controllers – one is used to ‘fly’ the drone, the other for operating the camera. Checking the way was clear, without obstructions such as telephone lines or branches, Felix, expertly made a small manoeuvre on a joystick, and the drone soared upwards, to hover overhead, filming us standing below, as we viewed the images on the laptop computer screen.

“The camera is suspended underneath the drone on a three-axis gimbal stabiliser, and that is probably half the cost of the machine,” explained James. “With a couple of lap-tops we can operate out of the back of a car, so we are pretty self-contained as we charge our batteries en-route.”

“Building and development industries are increasingly using them for aerial surveys… and for sales. Only recently we were talking to a developer who wanted pictures of what the view would be from the upstairs of a property that wasn't yet built!”

James is also speaking to the fire service about using drones, fitted with infra- red cameras, to identify hot spots at large fires, and he-is team are also working with church wardens and vicars, surveying spires, towers and roof tops.

“The cost and time to get a set of scaffolders up a church is enormous, when we can get up there and take a close-up shot in minutes. Most people are unaware they can have up to a dozen high resolution aerial photos for as little as £149.”

Over the time he has been flying drones, what has been James favourite “shoot”?

“This would have to be following the BBC Radio Suffolk for their ‘Suffolk Coast’ day. We had a gorgeous day which began at 5am in Lowestoft and ended at 8pm at Felixstowe. It gave us the opportunity to showcase the best of the entire Suffolk coast – and reminded us of what a fabulous area we live in,” remembered James.

So, what would he still love to film?

“Many of the beautiful sights in East Anglia we have been lucky enough to film – with the exception of my home town, Great Yarmouth. We would love to one day produce an aerial film about the place I grew up in. Our ambition is to highlight to the wider public just how useful the technology can be. This may be in the area of search and rescue, fire service assistance or flood appraisal.”

To set up a commercial aerial imaging company is quite expensive as, although the equipment costs less than £10,000 these days, there are further significant costs from the training, licensing and insurance that is needed.

“The training is the same sort of thing that a pilot would go through: safety in the air, understanding air navigation, who to avoid, where to fly and what to do if there’s a problem. There are lots of rules. For example, we are limited to a certain height and range, we must be able to see the aircraft at all times, and we’re not allowed to fly near airfields, nuclear power stations nor over roads or properties which aren’t in our control.”

What does James think about all the bad publicity over drones?

“It’s really unjust, because there’s not been one single aircraft brought down by a drone, nor one single serious injury, and this is while they are selling at the rate of thirty thousand a month, worldwide! Privacy is a different argument. I have had an occasional ‘eh, what are you doing?’ as some-one spots us filming, and I’ve explained that the camera isn’t even pointing at them! I accept that, while most people fly camera drones for legitimate purposes, inevitably there will always be one or two who will do it for nefarious reasons.”

Drones are so easy to buy and can be flown anywhere by unlicensed pilots with, it seems, with very little comeback,

“The CAA just say that the police will deal with it, but the police are too busy with other things and often don't really know about drone laws,” said James. “By the time some-one complains and anyone gets involved, the drone is long gone and you can’t find out who has been flying it. What is most frustrating for us is that people think they can use a drone professionally without a license, training or insurance. Some estate agents, for example, will buy one, fly it and take photos to advertise a property – yet that is illegal.”

There are 1,400 qualified drone pilots in the country and they, like James, must apply for a new license every year.

Skycam East has filmed for BBC Look East, the Discovery Channel and Archant newspapers, together with a wide range of estate agents, developers and even a waste management company. James has also just signed a contract with a property management company, for Skycam East to survey the roofs of thousands of their buildings across East Anglia, enabling Felix and Rachel, who have both just graduated in media studies, to be employed in the company.

What of the future? For drone photography and video, the sky really is the limit,

“I think eventually professional drone companies will develop specialities and concentrate on either film-making and TV, or development and buildings, or whatever. In East Anglia we still have a lot of prejudice to overcome. In America farmers use them to check how their crops are growing! Farmers here still are very reluctant. There is a load of untapped market here.”

So, if you hear an unusual buzzing sound, look up, as a drone could be flying over a church or a field near you…

This article was first published in Suffolk Norfolk Life magazine in March 2017.