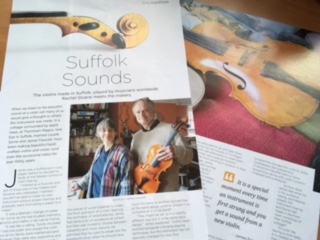 When we listen to the beautiful sound of a violin not many of us would give a thought to where the instrument was made. In a cottage surrounded by apple trees, at Thornham Magna, near Eye in Suffolk, married couple Sylvie and James Fawcett , have been making beautiful hand-crafted violins and violas (and even the occasional cello) for over thirty years.

James was a Suffolk-born viola player, before he decided to study at the Newark School of Violin Making,

“I trained as a musician and got to know one or two makers and became very interested. I realised I wouldn't be able to make my own instrument without proper training, and gradually went from being a player to a maker.”

It was a dramatic change of career for Sylvie, as she had studied chemistry, physics and maths in her native France,

“It was like a calling,’ Sylvie chuckled. “I had one sister who played the violin, but all my family were mathematicians! However they were very supportive and helped me come to England to study.”

Sylvie remembered that the first thing she learnt at college was to join two pieces of wood together to make the front and back of a violin, learning the technique of wood-planing. James had done a bit of woodwork at school, but then was forced to choose between carpentry and music lessons. He admitted that he used to sneak into the woodwork shop when he should have been doing sport.

To a non-musician one violin looks much the same as another, but are they all the same design whether played in an orchestra or in a folk band?

“They might be set up in a slightly different way but it is the same basic design,” James explained. “Violins have evolved alongside changing playing techniques, but the instrument has not basically changed for over four centuries.”

Indeed James and Sylvie still use traditional tools, and an old-fashioned double-boiler to heat the glue that joins the instrument together.

James explained that even in a mass-produced violin there would be an element of hand-finishing, even though most of the instrument would be made by machine and the varnish sprayed on. “The very basic ones are pressed plywood instead of being carved from solid wood, which is how a  hand-made instrument is made.”

“Another difference is that we have chosen the wood, and each piece is worked by hand. You become aware of the qualities of that piece of wood and know how each part of the instrument will come out differently. No two things are the same.”

How long does it take to make an instrument?

“We reckon it takes about six weeks to do the woodwork, especially if we are doing a design for the first time, when there is a lot of drawing and decision-making to be made,” continued James. “We start with drawings and then make a template.  The wood is shaped and then cut into two and opened like a book, to make the two halves.

“It is gouged first, then scraped and planed to get this really smooth surface,” added Sylvie.

“The woodwork comes together quite quickly and then there is a few weeks of varnishing and drying before its ready to be strung up,” continued James, “You never completely know what the character of the instrument is going to be until you play it, and it starts to come to life over the first minutes and hours of playing.  If you have chosen good wood, as each part comes together you can hear it ‘ringing’, especially as you tap the front and back. It is a special moment every time an instrument is first strung and you get a sound from a new violin.”

The explanations flow easily between the James and Sylvie, and indeed they always work as a partnership,

“We work together on each instrument and we put a joint label on each instrument, with both our names on. We are a little bit unusual in that respect as other couples usually have separate labels,” confirmed James. “We work as a team and try not to specialise as we each want to do each bit from time to time.”

In their workshop, surrounded by tools, wood-shavings and wooden pieces instantly recognisable as the components of stringed instruments, Sylvie was working on an ebony finger board, carefully smoothing the surface with a small plane,

“It is to go on the neck of the viola we are making. It has to be made from a hard wood as it gets worn by the player’s fingers on the strings. The scroll, the ribs and the back of the instrument are made from maple or sycamore,” she explained, as she held up the ebony and peered down its length, “It is very important to get the curve of the wood right so there is room for the strings to vibrate.”

Every joint in the instrument has to be reversible so that James and Sylvie can take it apart and repair it if it gets damaged, and a large part of their work is doing repairs and restoration of older instruments.

Who buys a hand-crafted violin?

“A number of our instruments go abroad and this one we are making at the moment is going to go to Australia and will be played by an advanced student or a young professional musician,” said James. “A few years ago we sent a whole batch of instruments to Australia to found a new period instrument group. They came and performed at the Proms in London and we were able to go and hear them, going into the bowels of the Royal Albert Hall afterwards to meet them, and that was a special moment.”

Far from working in isolation in their cottage, James reassured me that there is quite a community of instrument makers, who support each other… whilst enjoying some friendly rivalry,

“The standard of violin-making that is going on now has never been so good, because of the level of knowledge and technical skill.”

Whether repairing, restoring, making a bespoke instrument for a commission or creating an on-spec violin  James and Sylvie still find time to promote and enjoy the music of their favourite instruments, through concerts and their annual music festival, “Music at Thornham” which is held in July. This year’s programme includes the violinist, Aisha Orazbayeva, the outstanding Chiaroscuro Quartet lead by Alina Ibragimova, along with cellist Corentin Chassard and colleagues.

So how does James feel when he is the audience seeing, and hearing played, the instrument that he and Sylvie had made in the front room workshop of their Suffolk cottage?

“It’s a bit like having a child really. It is created and then it goes out into the world on its own. It comes to life when it makes a sound in the hands of a musician. For a musician to put their faith in it, is really an excellent thing.”

For more details of Music at Thornham : www.musicatthornham.org.uk

Sylvie and James can be contacted via www.fawcettviolins.co.uk