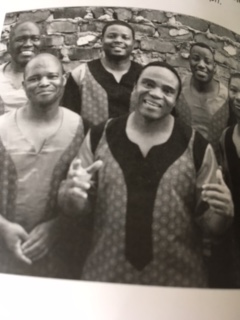 It may have been a wet and windy night outside Snape Maltings Concert Hall but indoors the rhythms of South Africa lifted the temperature and the hearts of the capacity audience as they welcomed back to Suffolk the nine members of Ladysmith Black Mombazo.

Formed in 1964 by Joseph Shabalala, it was in 1986 that Paul Simon featured their music on the Graceland album and the South African stars became world-famous. There may be nine voices singing but their vocal harmonies are so close that the “mbaqanga” sound they create is a single entity. Dressed identically with first blue, then yellow striped tunics and gleaming white trainers, flashes of their matching red socks were revealed as they danced to the beat of their music, with the highest over-head kicks that I can remember seeing on stage!  It was well into the second half when the obvious occurred to me… there were no instruments, (not even a tuning fork) just warm human voices creating the hypnotic tunes, rhythms and chants, interspersed with the distinctive “clicks’ of some South African languages.

They performed the songs that made them famous in the UK, Homeless and Diamond On the Soles of their Shoes, but it was a varied programme that included King of Kings and the emotional, Long Walk  to Freedom, a tribute to Nelson Mandela and the end of apartheid.

Members of the group took turns to introduce the songs and each other, including siblings, and two of the original members of Ladysmith who are still performing with them– one now aged 69 but still dancing and kicking almost as high as the younger members.

Snape Proms always brings to Suffolk every genre of music, including the “world music” that Ladysmith Black Mombazo can rightly claim to have inspired our interest in.