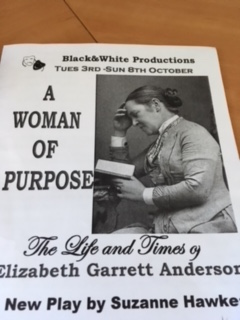 Review: A Woman of Purpose by Suzanne Hawkes

A Woman of Purpose by Suzanne Hawkes

One hundred years ago this year, Elizabeth Garrett-Anderson died, which is an excellent reason for a play about this Aldeburgh woman who became the first woman to qualify as a doctor in the UK, and was appointed the first female mayor, the Mayor of Aldeburgh.

Suzanne Hawkes, from Felixstowe, is now well-established as a playwright specialising in dramatizing local history, especially stories from East Suffolk. As a local person in the audience, you can be confident that, even if you know a little of the events portrayed, her pain-staking research always reveals details that intrigue, enlighten and make you go home saying “Did you know that…….” *

“A Woman of Purpose”, the latest play from Black and White Productions, is in the form of a dramatized story, with Braham the Handyman (played by Paul Pascall) and Jenny the Housekeeper (Suzanne Hawkes) acting as narrators, in a comic double act, complete with some groan-producing proverbs and sayings, and excellent comic timing.

Venues for the play have included Leiston Long Shop and The Two Sisters Arts Centre at Trimley, but there is also a promenade version of the play that will be produced in Aldeburgh (6th-8th October). The promenading, when the audience goes from setting to setting, was apparent from the introductions to each section… “Here we are in St Peter and St Paul Church/Alde House/ Jubilee Hall/Moot Hall where Elizabeth….. etc etc.” They were helpful signposts to the action when performed at the more static venues!

The strong cast included Jayne Lindall as Elizabeth’s friend and confident,Emily, and her sister Louie Garrett (played by Heather Prince),  but the play obviously hung upon the casting of Elizabeth Garrett-Anderson. Stephanie Stoddart certainly didn't disappoint with a portrayal of Elizabeth as a feisty, confident feminist, determined to break down the barriers that stopped middle-class women in the mid-1800’s from pursuing a career. I couldn't take my eyes off her expressive face; Elizabeth was certainly not some-one to take fools gladly!

The play covers the period of Elizabeth’s life (1849-1880) when she took on the universities and medical schools of England in her determination to become a doctor, and it ends with her father, Newson Garrett (Steve Roche) being appointed Aldeburgh’s first ever mayor.

With incidental music sung by the clear-voiced gentle tones of Beatrice Carpenter, accompanied by Bill Stoddart on keyboard, this was a very enjoyable and informative performance.

I think the real unsung hero  of Elizabeth’s amazing success was her father, Newson Garratt (played by Steve Roche) who, whilst running a successful business at Snape Maltings, went against family pressures and the social conventions of the time, to have his daughters educated, proudly encouraging them to follow their dreams of careers and independence.

A Woman of Purpose by Suzanne Hawkes will be at:

Check for availability of tickets: 01394 279613 or email hawkes.blackandwhiteproductions@gmail.co.uk

*Did you know that……

Elizabeth’s uncle was the Leiston farm machinery manufacturer. He and his brother did not get on well!

After her sister Louie died of appendicitis, Elizabeth brought up her four children, as well as three of her own.