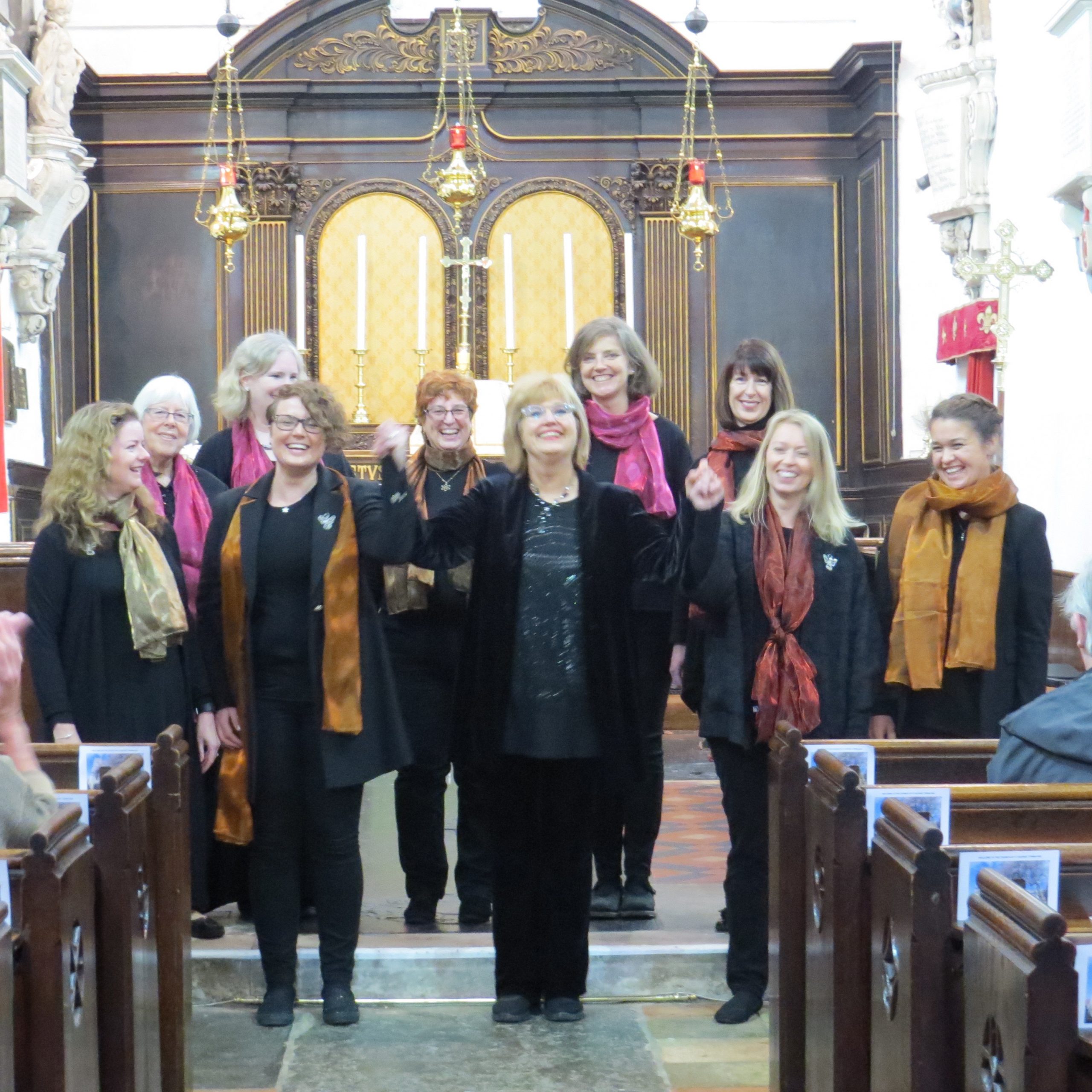 When is a choir not a choir? When the conductor says so, is the answer!

In 2014 Vetta Wise gathered together a group of hand-picked singers from across Suffolk and Norfolk, to form a vocal group that would sing in historic locations, usually churches.

So why is Vetta so insistent that Seraphim is not called a ‘choir’?

“It is a solo ensemble! I love choirs. It’s my job; I’m a choir trainer. But those of us who work in music, have various terms for various things. To me a choir is a large group of lovely people singing together. You try and work with them to mould all the tenors, all the basses etc… and it’s a group sound. Seraphim is like knitting with nine different colours, rather than lots of reds, lots of greens, lots of blues etc.

“Sometimes, you may hear the different individual voices singing in melody, especially if the women are standing in different places around the church, but then sometimes they come together as they move past you, and sometimes meld into a blend of voices.”

When I first heard Seraphim, at St Michaels church in Framlingham Suffolk, a year after they were formed, the nine women’s voices, each perfectly in tune and each one playing a crucial role, created one glorious sound, unlike anything that I had heard before.

As they sing, Seraphim move into different positions around their performance area, the nave, chancel, cloisters etc, making best use of magnificent acoustics to enhance the sound they create, singing music as diverse as 14th century Latin plainsong to more recent music, such as Vaughan Williams and living composers.

Named after the highest category of angels, who are supposed to sing as they fly around the face of God, Seraphim is proud to say they make “Beautiful Sounds in Beautiful Spaces”, so how is the unique sound of Seraphim created?

“I know what each voice sounds like,” explained Musical Director, Vetta Wise, “as I have worked with each one individually. It’s a question of putting them together in the most effective way, or that particular piece.”

An internationally renowned conductor, Vetta is at the heart of choral music in North Suffolk, where she is currently the musical director of the Pakefield Singers.

It was two things coming together that led to the formation of Seraphim, with their tagline of ‘beautiful sounds in beautiful spaces’,

“I had moved here from South Africa and had been discovering all these beautiful small churches. A year later I was asked to help with the Cape Town Opera Chorus, who’d come over from South Africa, to perform at the opening of the Cardiff Millennium Opera House. It was quite emotional to meet my old choristers, when they arrived,” Vetta remembered.” The organisers took us on a tour around Cardiff and said that they had some beautiful Welsh churches, but they had nothing to compare to the churches in East Anglia!”

Vetta tucked that thought away, whilst knowing that her usual large choirs would not fit in the small churches she loved.

“The two thoughts eventually came together at a point in my life when I was looking for a different challenge: a small specialized group of women singers, performing in beautiful unusual places. I then thought, ‘how am I going to get audiences to these historic rural places’? So, in a year’s performing season, we do two or three main concerts, but we also do two special musical pilgrimages ….”

These have included “In the Steps of St Edmund”, around West Suffolk churches, and “Medieval Norwich” which I went to September 2017. Two coaches collected the “pilgrims” from different pick-up spots in North Suffolk, then drove to Norwich, first to hear Seraphim perform in the tiny church of St Julian, with its lingering smell of incense. We then were driven to St Helen’s, Bishopgate, then onto the cathedral, before walking across the road to St George’s church in Tombland. At some venues, the Seraphs were standing waiting for us and at others the audience sat down and then they glided in, quietly singing as they made their way to their opening positions. Either unaccompanied or with flutes, the music soared around us, one unified sound, from nine incredible voices. In an unhurried day of surprises, with coffee and cakes midmorning and a delicious hot lunch served in the Great Hospital, Norwich, the day ended with more cake at St George’s, before a coach ride back to our pick-up spots.

Many members of the audience were Seraphim followers, but several had come along just because they fancied the idea of doing something a little different,

“It’s a completely unique day. I’ve never done anything like this before. There were wonderful churches, beautiful singing and nice people…. They used the acoustics so well with voices at the front, at the back, on the sides… it was music in 3D and a new experience!” laughed Sally Greenhill, who was a ‘pilgrim’, as Vetta calls them, along with her husband.

Jenny Aspland had picked up a leaflet in Beccles and was already planning to go to hear Seraphim again, while her friend, Susanna Bedford had come from Cambridgeshire,

“The music has been amazing and although I’ve been in the cathedral before, I’d not been to the Julian Chapel, nor the other churches. You don't often get the chance to hear women-only groups, particularly singing the early music.”

Robina Scott booked her ticket not knowing what she was going to,

“It’s really been high quality and a wonderful day, beautifully organised and structured, and there’s been such a flow and feeling of spaciousness around it all. Beautiful voices, lovely buildings and meeting friendly people from across East Anglia.”

The members of Seraphim are all highly trained singers, some working professionally in music. Why do they like performing as Seraphim?

“It’s something about the spaces we go into and the dynamic of the nine voices together”, explained one of the founder members of Seraphim, Judie Shore.

All the singers agreed that the pilgrimages are very challenging  but very worthwhile.

“They are unique,” added Judy. “The three little concerts link music, people and history through sound, and that’s what makes it very special.”

“We have a concert in Westleton church in March which is called “Anonymous was a Woman”, explained Vetta. “It’s thought that music written in the old days and labelled ‘anonymous’, could actually have been written by a woman! The concert will feature the work of woman poets and women composers. I am also currently doing the research into our next pilgrimage, “If These Walls Could Sing” on 29th April, when we will sing in churches adorned with medieval wall paintings, some only recently discovered.”

To help fund Seraphim, they also take on hired work at weddings and funerals, etc, and have also been paid to perform at charity fund-raising events. Vetta’s ambition is for Seraphim to sing more in grand houses and stately homes. More beautiful sounds in beautiful spaces.

Anyone got a ballroom, sweeping staircase or a minstrel’s gallery?