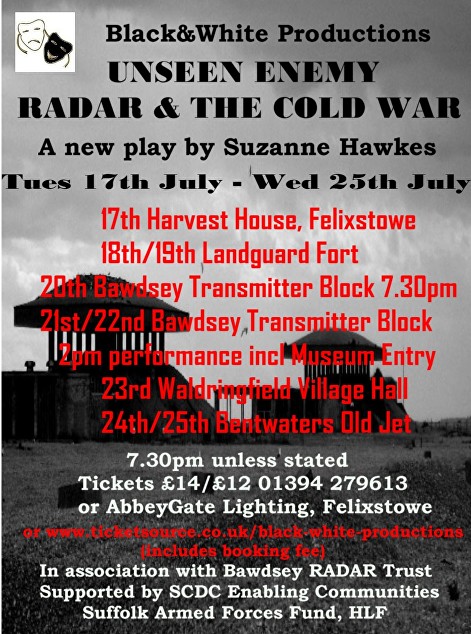 Review of Unseen Enemy, RADAR and the Cold Way.

Felixstowe playwright, Suzanne Hawkes latest local history play has achieved what would seem impossible, a story of the Cold War, radar, and threatened nuclear attack, that is also funny.

With even more intriguing venues to come, Unseen History, Radar and the Cold War opened to a sell-out audience comprising regular Black and White Productions supporters, those interested in local history, and a few who were intrigued to see inside one of Felixstowe’s iconic landmarks, Harvest House. None should have been disappointed.

The theatre company’s established cast of talented semi-professional actors related the almost unbelievable story of how Suffolk was at the heart of the post-war tensions, when America established its nuclear arsenal at USAF bases here, expecting Russian bombs at any time. Who would be the first to press the button for World War Three?

The play, with a simple wooden table and chairs, was performed before video images of cinema news reel, TV reports, and public information films from the era, with a very effective soundtrack of music from the 40’s, 50’s, and 60’s. The play began with Stalin (played by Sean Bennett), Roosevelt (Dennis Bowron) and Churchill (Phil Corey) sitting in identical poses to the news photo on the screen behind them. Later we heard from Krushchev (a steely eyed Steve Roche) and Truman and Kennedy, (both played by Dennis Bowron).

The story is told mainly through the words from the politicians’ speeches and the events as seen by locals at the White Horse Pub, “somewhere between Tunstall Forest and Orford.” We followed the story of the Korean War, the Berlin Wall, the Cold War, the forming of the Royal Observer Corps, sputnik, Aldermaston, Bentwaters, the Cuban Missile Crisis, etc etc.

It was the pub scenes that provided the humour as landlord Carl (Phil Cory) and his step-daughter Betty (Naomi Doust) clashed over popular culture: teddy boys, rock and roll, jukeboxes, CND and an American boyfriend. Customers Connie, (Stephanie Stoddart), her father Pops ( Alan Dix), and the barmaid Gwen (Suzanne Hawkes), aided by Connie’s son Martin (Thomas Haigh) and brother-in-law Maurice (Steve Roche), discussed the news of the day and events on the nearby ‘Ness, where top secret testing of weapons was taking place,

The biggest moments of drama came when the pub was thrown into panic when the warning siren went off in a false-alarm, and, as the play ended, with a tense scene in the Russian early warning centre when a faulty computer warned that five USA nuclear missiles had been fired and a snap decision had to be made on whether to retaliate. Knowing that this true story did not lead in the annihilation of the world, did not detract from the real fear that we in the audience experienced, as film, special effects, sound and lighting and a sober warning from the BBC, made it feel very real.

The special effects, costumes and props, especially the authentic military uniforms, were excellent, and American and Russian accents were good. Perhaps a little more of the budget could have been spent on more professional screens and, in a sunlit ballroom early in the evening, the films were initially hard to see, but they are minor criticisms.

Most of the excellent cast played several roles but special mention must go to Phil Corey, whose Churchill was more Churchillian than the man himself, Paul Pascall who played the real-life newspaperman Chapman Pincher (but here also a narrator who filling in the gaps in the story) and young actor Naomi Doust, who had a brilliant teenager’s withering look, but who matured convincingly, with the death of her American pilot boyfriend (Sean Bennett).

If you lived in Suffolk in this era, this well-researched play brought back many memories and, if you from elsewhere or were not even born, this was an evening when you would have had to pinch yourself that the history was all true…. And it was.