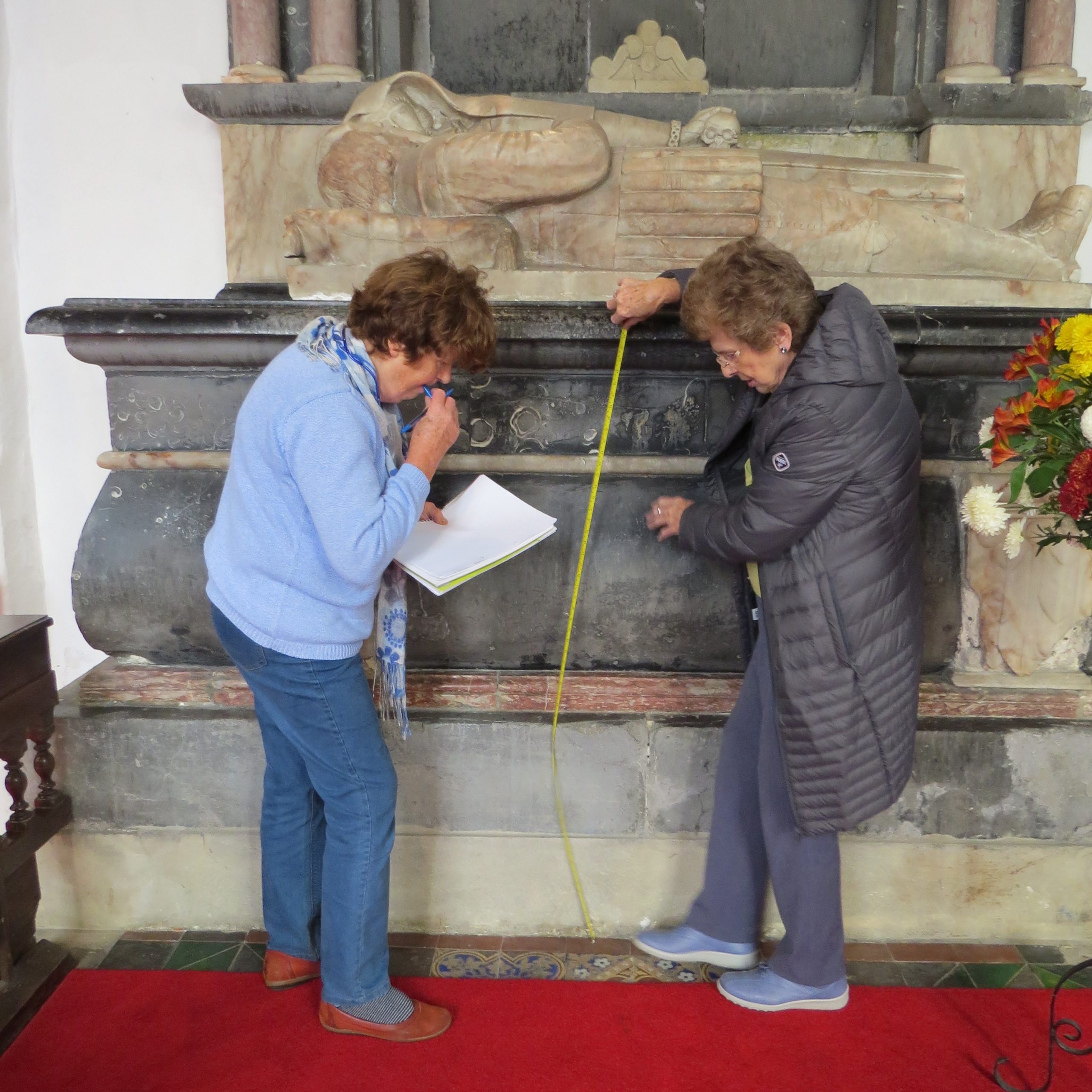 What’s in a Church?

From the organ to the mouse traps, it is the job of volunteer Church Recorders, to record everything in the building and provide an inventory of the church. This is a unique look at the changing history of what is often the oldest building in a community,

“We do it for several reasons,” explained Sue Medcalf, The Arts Society Area Representative for Suffolk, who looks after the eight Church Recording Groups. “First, many churches do not understand the value of the items they own, not just financial but their historic and aesthetic value. Another reason is that researchers often research obscure things that we have already noted, and it helps police and insurance companies if there has been a fire or the church is burgled, if those items are described.”

For forty years recording groups have been part of the work of NADFAS, the National Association of Decorative and Fine Arts Societies, which has been re-named, The Arts Society.

In 1971, the V & A Museum asked NADFAS to form teams to list the contents of churches, after they staged an exhibition of church treasures and were horrified that so many churches had no idea of what they owned, where it was stored and what it was worth, not financially but aesthetically and historically. The two organisations worked out a format to be used nationally, with guidelines and a set of standards to be reached. To date, across the country, 1,800 churches have been surveyed by 180 Church Recording Groups.

Members of the eight Suffolk Church Recording Groups, and three groups in Norfolk, undertake the survey work mainly in the summer months, leaving the winter months for research, writing up the reports, collating photos and statistics.

“I look after Norfolk and lead the Kings Lynn Group,” explained Alison Wakes-Miller, the Church Recording Representative for Norfolk. “We are an enthusiastic group of 20 who meet every Tuesday morning from April until the church gets too cold! There is a lot of work in compiling and sorting photographs which takes place out of season.”

Sue explained more about what the volunteers do,

“We make a detailed survey of every single item in the church from the chancel arch to the mouse traps. After all, in a hundred years we might have killed off all the mice!”

At Barham in Suffolk, at St Mary and St Peter church, a mix of the Deben, Ipswich and Orwell Church Recording Groups were busy,

“We are not experts but we have the help of members who are very experienced and have been doing this for many years,” explained Maureen Midwinter.

“I was looking for something to do!” laughed Jenny Mills, another of the volunteer recorders, “I’d never heard of NADFAS or Church Recording but met the previous chairman, who suggested I came along. I do the church memorials as I like typography, and you discover about people and the extraordinary lives they led – 19 children for example! There is so much history and every church is different. Bealings had fabulous woodwork, Martlesham had amazing windows and there was a weird history story in Westerfield…”

Every Church Recorder chooses an area to focus on and, as a trained wood carver, Maureen chose woodwork. Although there is no need to learn Latin to interpret the inscriptions carved in the wood, Maureen said that some members can read Latin and their help is much valued.

What had been discovered at Barham? The highly ornate and detailed carvings of cherubs, fruit and sea creatures was one area of interest,

“The altar rails, or communion rails as we call them, are Italian and a carving shows they were made in 1700. We think they probably came from Shrubland Hall. There are also very fine carved wooden angels holding medieval musical instruments, high on the roof. I think they were carved after the Reformation.”

Another of Barham church’s treasures is a Henry Moore statue of a mother and child.
“The Henry Moore sculpture was commissioned as a war memorial for Claydon church, St Peter’s,” explained Sue. “When Claydon church was made redundant in the 1970’s it was moved to Barham and this church was renamed St Mary and St Peter. Henry Moore oversaw the re-siting of the statue himself.”

Making notes as they looked up intently at the organ pipes, Charles Curry had joined Maureen Midwinter,

“At the moment, we are looking at the casing which is very complicated and we are trying to work out the moulding which has to be described,” said Maureen.

“We are amending a previous description to make it easier to understand,” added Charles.

“It will then go to our co-ordinator, along with photographs” Maureen continued, “and come back with some red marks and then we will go through it again. When it has been accepted by the co-ordinator, it will go to Sue, as area co-ordinator, who will also check it and hopefully it will be acceptable.”

Usually Church Recording groups work independently, coming together for training days or social meetings, but in September 2017, when the High Sheriff of Suffolk, Geoffrey Probert, expressed an interest in hearing more about their work, they took the opportunity to meet at Barham.

“I think the church recorders do a fantastic job and Suffolk is very proud of its 478 medieval churches,’ said Geoffrey. “Here in Barham we have wonderful Italianate wood carvings, a Henry Moore sculpture and a very good tomb of Edward Bacon, which is sitting under boxes of candles and a couple of kneelers, in the vestry!”

Geoffrey had given High Sheriff Certificates of Appreciation to some of the longest serving volunteers,

“We think the five people we have given certificates to today have, between them, done 150 years of church recording. Quite an achievement.”

The Church Recorders in Suffolk have now surveyed 70 of the county’s churches, while in Norfolk 28 of their more than 600 churches have been surveyed.

“The stained glass in all our churches reveals so much on closer examination. Stanhoe has lovely windows by Kempe, and Sculthorpe has one of the best collections of Pre-Raphaelite glass with designs by Burne-Jones, Ford Maddox Brown, Holman Hunt and Morris,” Alison remembered. “The screens and fonts are interesting as they often have similar features showing local workmanship”

It takes up to three years to fully survey a church and all the information is collated into a book of photographs and reports,

“When it is finished,” Sue explained, “we make five copies. One is given to the church, one to the Diocese, one goes to Church Care, the main Church of England headquarters in Westminster, one goes into the National Archives at Historic England and the fifth one goes to the V and A Museum.”

Copies of the Norfolk Records will be deposited in the Norwich Record Office, and the National Archives as well as one presented to the church.

“To become a Recorder, you need an interest in history and enjoy working as a team,” stressed Alison, “The work is interesting and rewarding; you are recording the contents and history of the church for future generations. We are not experts but we have a template to work to and good reference books as well as experts to consult.”

Someone once said that going into a church was like a treasure hunt and that recorders need patience, willingness to check facts, the ability to write unambiguous English…. “and a supply of warm underwear”!

For more details of how to become a Church Recorder, go to https://theartssociety.org/church-recording

NBL: This article was first published in Suffolk Norfolk Life magazine in March 2018