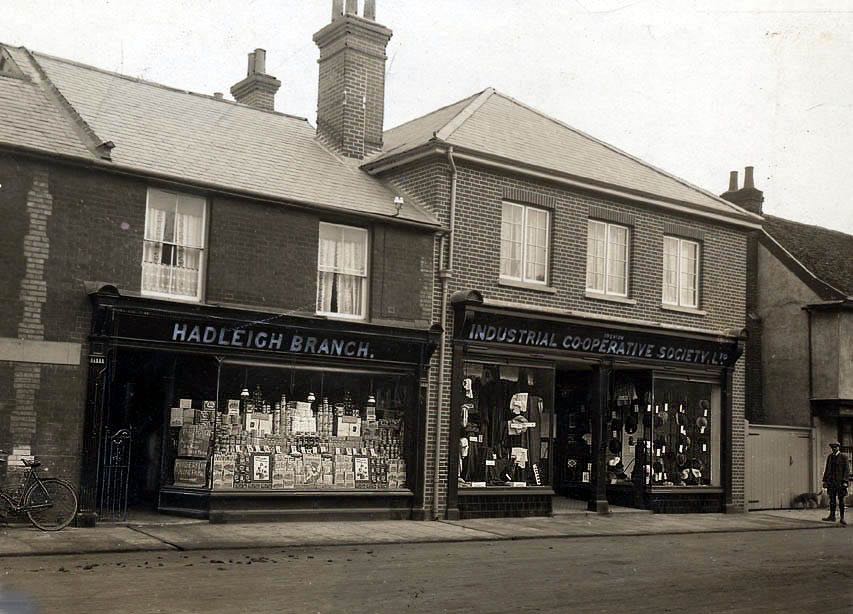 Most of us can still remember our mother’s Co-op “divi” number, as well as our own! It is some years since it had to be quoted at the checkout as plastic membership cards have long replaced the need to memorise the membership number, but somehow the numbers seem to be lodged permanently in our brains.

Mention the Co-op of old and memories come flooding back: the bread bin on the doorstep for the delivery, the milk float rattling down the road, the coal lorry laden with sacks, and the welcome appearance of the mobile shop selling daily essentials, and to me, growing up in Ipswich, the most important item – sweets! Attending the “Co-op Fete” on Christchurch Park and later, newly married, queuing for my “divi money” when it was paid each year.

Retailing may have changed a lot in the 150 years since the Ipswich Industrial Co-operative Society was founded but the membership model with shared profits remains.

Smaller Co-ops such as in Leiston in Suffolk were already in existence when the Ipswich Society started in 1868, but today the East of England Co-op (under the original Ipswich registration) includes many of those smaller co-operative societies, and covers Norfolk and North Essex, as well as Suffolk and Cambridgeshire.
Lots of smaller Societies merged over the years, becoming part of the East of England Co-op, including the Wymondham and Attleborough Society, Melton Constable Society and North Norfolk Society, in Norfolk, and the Leiston and Stowmarket Societies, in Suffolk.

Confusingly, it is a different organisation to The Co-operative Group, which also has shops in parts of the county but whose head office is in Manchester.

Across the region, the East of England Co-op has 15 supermarkets, 110 convenience stores, pharmacies, opticians, travel agencies and funeral directors, as well as a surprisingly large portfolio of property, both commercial and residential.

Clive Mann, is President of the East of England Co-op and he, with some other retired employees, have many happy memories of their years as a “colleague”. He worked in finance as a Management Accountant for 42 years,

“In my time working at the Ipswich Co-op it had one fifth of all the trade in the town and 85% of all milk sales. I remember there were ten mobile shops going around and 36 greengrocery vans, as well as delivery vans going out to villages. Customers each had an order book and they wrote the date at the top of the page and listed their order and handed the book into the shop. The order department then made up the order and it was delivered to your home.”

Dennis Old, a former electrician and Works Department Supervisor, is the proud owner of many items of Co-op memorabilia,

“The works department had all trades, electricians, plumbers, carpenters and so on. We had one lorry and that would deposit the materials and tools for all the jobs for the day. In some cases, we would go to a job and back on the bus!”

They did all the maintenance and repairs in Co-op premises,

“We even had a boot factory, a coal yard, house removals, a cycle department for trade bikes, dentist, off-licenses, dairy, a market garden, farms….”

When the main store in Carr Street, Ipswich, installed a central escalator, the Works Dept were in charge,

“Our strength went up to about 88 tradespeople and when we started digging we found pottery and discovered the site used to be an ancient settlement.”

Ernie Driver, former Food Store Manager remembers after the war, when everyone still had a ration book for their shopping,

“There was half a pound of soya flour per member, two eggs a week, two ounces of butter…..and I remember people would queue all day. You registered as a member at a shop for your rations, but members also had a “shortage card” which were things kept for the regular customers.”

John Stiff, another former Food Store Manager, started work at Bildeston Co-op, in Suffolk, initially as a delivery boy with a basket on the front of a bicycle. He then attended “bacon classes” in Ipswich in the evenings to qualify to work on the bacon counter. John remembers weighing out butter and cheese,

“We also had a drawer with loose sultanas and currants that we weighed up, and broken biscuits in a tin to weigh, too. Someone would ask for a jar of jam and we’d walk twenty feet to get it, bring it back and then they’d want a box of cornflakes and you’d have to walk all the way back again!”

“Every time the council in Ipswich built a new housing estate they used to ask the Co-op if they wanted a shop in the row of shops,” Ernie added. “That’s why there are so many estate shops and why the Ipswich Co-op was so successful; it had shops in the right places.”

Ernie also remembered that Clapgate Lane in Gainsborough was the first shop in the town to go self-service,

“We were very suspicious whether it would work,” he remembered. “We were asked to do the displays, which we did, but people were very hesitant about picking goods up as they’d never been allowed to take food off the shelves before. The first customers were given a free gift of a plastic serving spoon and fork!”

Food that had previously been sold loose, now had to be sold in packets,

“I remember we were used to selling loose biscuits and we were sure no-one would want to pay for biscuits in packets!”

“I was there on the first day and it was chaos, so many people went there because it was a completely different shopping experience. It was 20,000 square feet! People went around with a trolley, not a basket.” Clive laughed when he remembered the security worries then, “We took customer’s bags away from them, so there was this big island with staff where you used to have to log your bags and get a ticket. Of course, it was absolute chaos! After a couple of months, we had to ditch it!”

A 150th anniversary book has been produced by Laura Fellingham and Helen Raven from the Co-op marketing department, and they have found much to surprise them in their research,

“During the war we bought a fire engine and trained our colleagues, so they could help to fight fires. We also used our delivery vehicles to help take returning injured soldiers from the railway station to the hospital. We were so much more than a shop.” Laura said. “I think we are still like that today. If ever there is an issue, even if it’s not directly to do with retail, we get involved, and it’s heart-warming to know that’s always been the case.”

“A good example now is the defibrillators. We’ve installed 100 units outside many of our stores and in other community locations throughout the region. We’ve also developed training for all our colleagues to become Dementia Friends, helping us to support people living with dementia, their families and carers.” added Helen.

The East of England Co-op has a high profile nationally, with features on the One Show on BBC TV, and in the national news, for their ground-breaking project to sell “best before” labelled food.

A 150th anniversary is always worth celebrating so the award-winning Sourced Locally producers are repacking a Heritage range of products, and there will be some special editions of products such as beer, eggs, flour, tea, sausages and jam… the items that would have been on the shopping lists of our great grandmothers, 150 years ago.