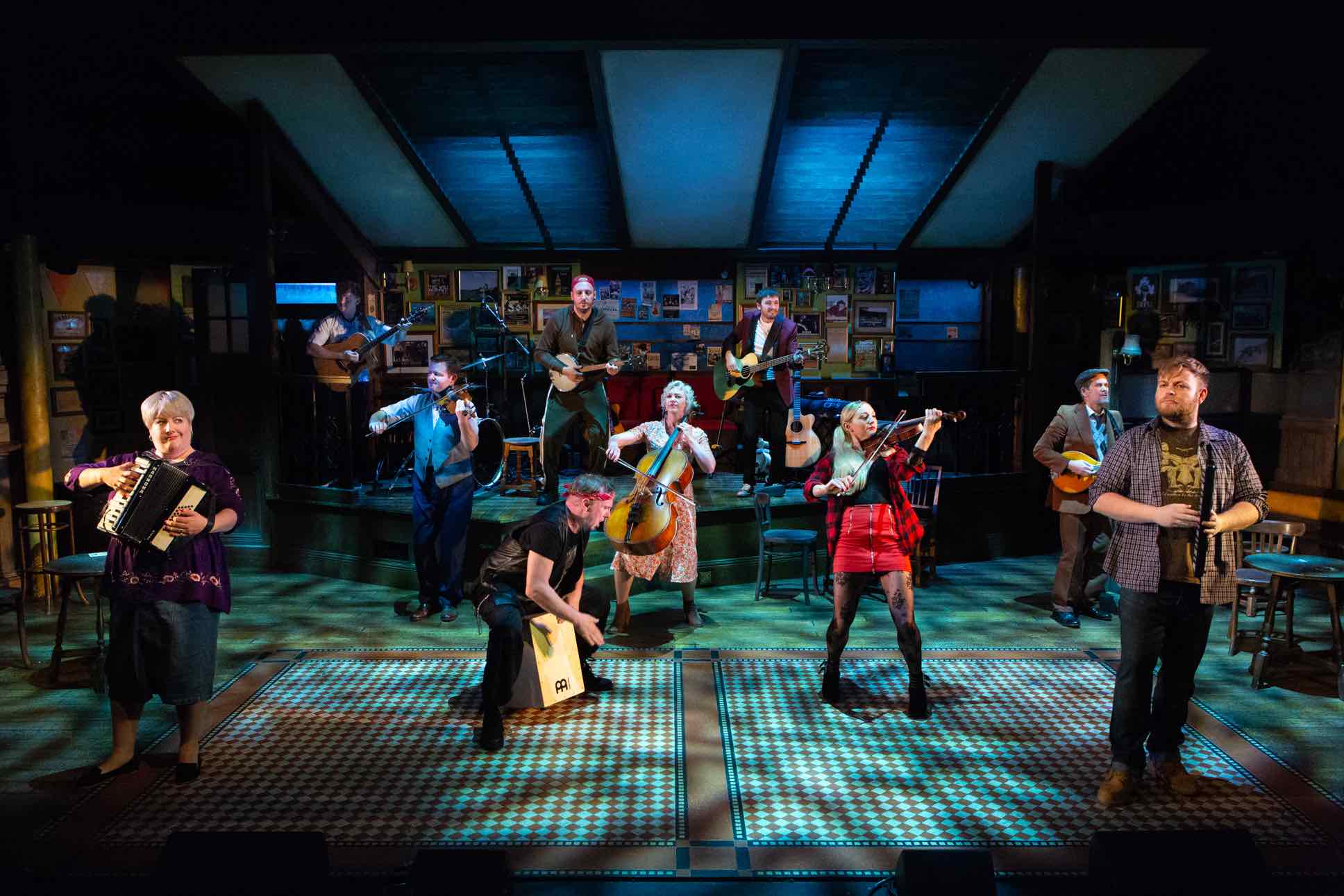 Review of Once, at the New Wolsey Theatre, Ipswich

Once started life as a very successful film, a love story set in Dublin, of two musicians, one about to give up on his singer-songwriting dreams, and the other, a Czech flower-seller, mother of one. Calling them “Guy” and “Girl” was supposed to signify that they could be any couple, in any city.

A musical that was written for actor-musicians is perfect for the New Wolsey Theatre, with its tradition of producing such work, beginning in Ipswich with the Rock-n-Roll pantomimes, it has continued with their plays-with-music, and musicals, performed by talented actors playing multiple instruments, singing and dancing.

Get to your seat early as the New Wolsey Production of Once, starts with a major jamming session of Irish folk-rock on stage, a good ten minutes or so before the play itself begins. With the split-level set, a perfect representation of a Dublin bar (I could almost smell the smoke I remember from my visit to the city, pre-no-smoking laws) we felt as though we had made the journey across the Irish Sea.

Guy (Daniel Healey) lives with his widowed father in a flat above the vacuum cleaner repair shop where they both work but, following the departure of his girlfriend to live in New York and his lack of success as a musician, is in the depths of depression and not even his lively bunch of musician friends can raise his spirits. Girl (Emma Lucia), an ever-optimistic ball of energy with a great sense of humour, lives with her mother, young daughter and a crazy bunch of Czech’s, all trying to make a success of their new life in Dublin, learning English from watching TV soaps.

Guy and Girl meet in the pub where she hears him singing, with his guitar, for one final time, and persuades him to repair her broken Hoover saying she will pay him with a song. Yes, it sounds corny and it isn’t the strongest plot but don’t let that put you off. Once is very funny, as well being a lovely gentle story (albeit with some great rocking ensemble songs) that worms its way into your heart and leaves you feeling that the couple deserve happiness together, even though somehow you know it is never going to happen….

Favourite songs? Of course, the most well-known duet, Falling Slowly, but also the ensemble A capella version of Gold that had the audience spell-bound, (the duet is first sung on a clifftop overlooking Dublin , with a clever twist to what has appeared to be a traditional box stage set) and Girl’s piano solo The Hill, another moment of pure emotion.

Daniel Healey (Guy) was strong as the heart-broken depressed guitarist with a tougher street-sound and Emma Lucia (Girl) a perfect counter-foil to this, with her energy, optimism and beautiful clear emotional voice. (I kept thinking of Carole King only to read in the programme that she “made her professional debut” in Beautiful, the Carole King Musical’s, national tour.)

The whole cast of thirteen, were excellent with great accents and superb playing, but special mention must go to Baruska (Susannah van den Berg) playing Girl’s mother with great Czech aplomb and Billy (Sean Kingsley) as the music shop owner, a wanna-be rocker who recommends Ronan Keating, and has great comic timing and amazing facial expressions.

A co-production with Queen’s Theatre, Hornchurch, this is Once’s regional debut and is a great show if you like to laugh, cry, and enjoy some great ballads as well as some rolling, foot-tapping Irish folk-rock.