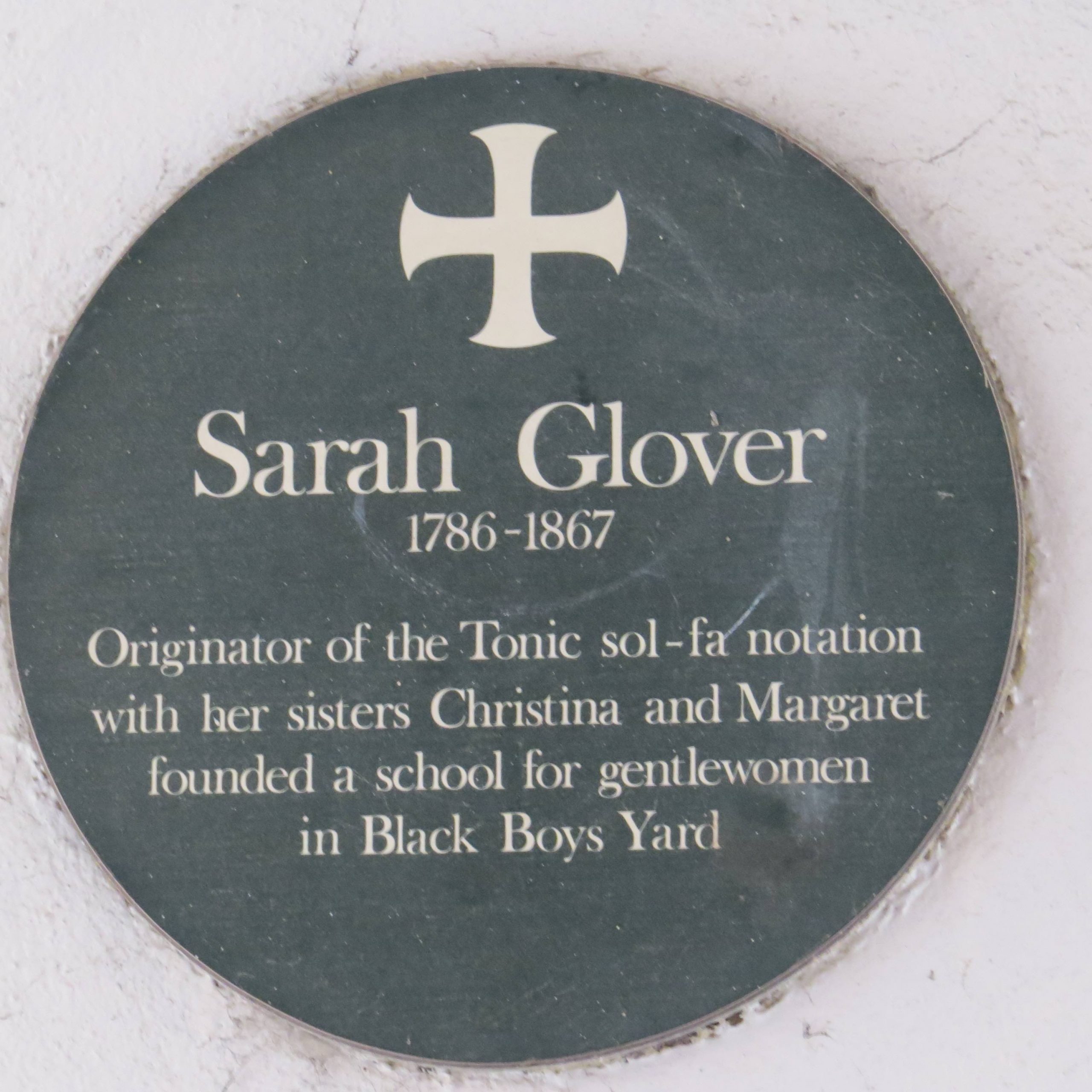 When wandering the streets of our towns it is amazing what you discover if you just look up. Often modern shop plate-glass windows and automatic doors are topped by Georgian roof lines or Tudor windows, giving us clues to the history and previous incarnations of the buildings. Sometimes a plaque on a wall reveals that someone of eminence lived, died or worked there. You can see plaques on buildings across Suffolk and Norfolk, in Felixstowe, Bury St Edmunds, Kings Lynn, Gt. Yarmouth and others, but it is the city of Norwich and the town of Ipswich, that have the most concentration of plaques. Ipswich has adopted the national idea of Blue Plaques, whereas in Norwich you can find several designs.

The idea of an official ‘Blue Plaque’ began in London in 1866 and the capitall now has over 900. An idea started by the Society of Arts, the London plaques are now administered by English Heritage and have to fulfil certain criteria. They commemorate someone of note who lived at that location for a long time, or at an important and relevant period of history. The person has to have been dead for twenty years, so that any “skeletons” in their cupboard will have had time to emerge, before they are honoured!

Around the country there is no one organisation who takes responsibility for choosing and installing plaques: it is up to local councils, charities or historical organisations to set up a scheme.

“In 2000 the town of Ipswich, like Norwich, had lots of plaques,” Neil Salmon, a member of the Ipswich Society remembered. “My friend, Ruth Serjeant, listed two dozen plaques of several different types!”

These included plaques put up in 1982, around the dock area, to mark the first Maritime Ipswich festival as well as some put up by house owners.

A New Zealander friend of Neil’s was researching PEN International, the world-wide association of writers, and mentioned that one of the past presidents, the writer V.S Prichett, was born in Ipswich, and wondered how many Ipswich people knew that.

“I thought about it, and about the other famous people from Ipswich and how they should be remembered too,” said Neil.

“After discussions, we started with seven names, including V.S. Pritcett. We have been a little more flexible than English Heritage. For example, the house where Thomas Gainsborough, the artist, lived has been demolished, but the house next door is very similar, so it seemed reasonable to put the plaque there. We also have a plaque to Robert Ransome, on what was the site of Ransome’s iron foundry.”

“My initial idea was that the plaques should all be in the town centre, so they could form a trail and guided walks but, in a town this size, recently we have gone into the suburbs too,” added Neil.

As new plaques have been put up, The Ipswich Society has published revised leaflets that guide visitors around the trail. The current one (number four) shows the location of twenty-two Blue Plaques. Another leaflet will be produced when more new plaques are added.

“I must admit I hadn’t initially thought in gender terms,” admitted Neil. “Relatively recently, people said that we didn’t have enough women, so we’ve made a point of bringing in an extra four women, all notable and worthy, to balance that differential. They include Constance Andrews, a great Suffragette, and Nina Layard, the archaeologist.”

Tony Marsden ran the project after Neil, but Tony Robson, who only moved to Ipswich five years ago, joined The Ipswich Society to learn more about his new home and has now taken over the role of Blue Plaque Organiser,

“Suggestions for plaques are coming at me thick and fast, but some are not appropriate. For example, the Women’s Institute asked if there could be a plaque to mark their centenary next year, but they are not a person – and they are not dead – so it doesn’t fit the criteria. I’ve said, however, that we would help if they want to put up their own plaque.”

English Heritage plaques are ceramic and are set into the building. This was too expensive for the Ipswich Society to replicate, plus they wanted a plaque that could be screwed onto a wall. Designed by the late Brian Jepson, who had created his own Blue Plaque to commemorate the Dutch artist Cor Visser, who had lived in his house in Fore Street, the Ipswich Society plaques commemorate writers, artists, historians, a manufacturer, soldiers, architects, a co-operative pioneer, a Nobel Prize winner and the first woman parachutist!

In Norwich there are a bewildering array of plaques, but there is no leaflet or guided walk to help you find them.

“Various organisations have put up plaques, round black ones, green ones and blue ones…” explained Norwich Blue Badge Guide, Jude Sayer, as she offered to show me some of the plaques.

There are plaques erected by the city council and by church authorities. In 2006 it was HEART, the Norwich Heritage Economic and Regeneration Trust who took over the responsibility for the plaques of Norwich, although HEART was dissolved last year. The blue plaques they installed, explaining the significance of buildings and streets, such as Wrights Court, Paston House and Britons Arms, can still be spotted. Other plaques commemorate the Flemish weavers who in the 16th century came to the city and have left their influence on the landscape and the language.

Jude explained that, as the Norwich plaques are spread widely, there is no special route, but a good selection can be found around the cathedral, and the Tombland and Lanes area.

“Opposite the entrance to the cathedral, on Augustine Steward House, built in 1549, a round black plaque remembers the Ketts Rebellion, against the Enclosure Act. It began with two tanners in Wymondam, who marched on Norwich, and numbered several thousand when they got here! Augustine Steward was the deputy mayor and while the mayor went to talk to the rebels, he was left to run the city.” The house was used as quarters for the King’s soldiers.

At St Saviours church, Magdalen Street, Norwich, there is a plaque to Matthew Parker, who was born in the parish,

“Matthew Parker was a great favourite of Anne Boleyn and she made him her chaplain. Her daughter, Elizabeth I, made him Archbishop of Canterbury and, although not a fanatic like Mary, she was a member of the Protestant Reform movement and wanted to know that people were observing the national religion. Matthew had to check on this, and did it very conscientiously, earning the nickname “nosy”. This is where we get the term ‘Nosy Parker’!” Jude laughed.

Just around the corner, hidden in an alleyway near Blackfriars, is a plaque to Sarah Glover, who invented a way of writing music, that is still used today, the Tonic sol-fa notation.
Further on, St Andrew’s Hall has a plaque to Sir Thomas Erpingham, warrior of Agincourt, mentioned by Shakespeare. He paid for St Andrew’s church to be built….. and so the plaques and their intriguing glimpse of history, go on.

When wandering the streets of Norwich, Ipswich or any of our other towns, look out for plaques, whatever their colour! In Ipswich, go to the Tourist Office and get hold of the leaflet that has a map to help you, or check out the website for The Ipswich Society. It is amazing what you can learn.