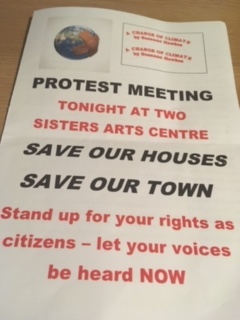 Review: ‘A Change of Climate’ by Suzanne Hawkes

It is 2029 and the Two Sisters Arts Centre in Trimley, Suffolk, is the venue for a protest meeting. Felixstowe is about to be abandoned and the population moved to a new town at West Stow. The port is no more after the Chinese moved out after taking control of Hong Kong, and the prom and beach have disappeared to erosion, along with the tourist trade. Felixstowe playwright Suzanne Hawkes is better known as a writer of local history plays but, with her latest production, she has taken the subject of climate change and used her vivid imagination to take today's news stories to their ultimate conclusion. As Suzanne says " my belief is that much truth can be brought about with humour. Apart from that – we live in such difficult times at the moment – if we didn't laugh…." Over-population, euthanasia of the elderly, food rationing, the rise of vegetarianism and veganism, compulsory gender neutrality for children, the demise of the BBC and the rise of Extinction Rebellion, have all come about post-Brexit under the prime minister Nigel Farage, with the Channel Tunnel blown up by the French in retaliation.

It all sounds rather depressing but, performed with a minimum of props and more than a touch of humour, by the experienced team of Black and White Productions pro/am actors , the audience smiled … and were discussing the likelihood of Suzanne's prophecies over their interval drinks! The story that encapsulates all these predictions is that Sandra Meadows (played by Suzanne Hawkes), who was a well-known local 2020's campaigner, is determined to stay in her home town, camping out at her arts centre. Joining her there is Dave Harrison ( Phil Cory) a jobless butcher, together dreaming of meals of delicious meat, and eventually sharing Sandra's secret stash of sausages. Her elderly father, Ron Meadows (Paul Pascall) arrives after escaping from his other daughter's care (Heather Prince), frustrated by the vegan food, her New Age lifestyle and threats of euthanasia. Extinction Rebellion protestor, Sandra's son James (Thomas Haigh) descends on the arts centre, in the disused church, after disagreeing with the increased violence of Extinction Zero who, in 2022 has assassinated President Trump! Add to the mix a replica gun-toting protection officer, Brin (Steve Roche), charged with getting Greta Thunberg (played by a very convincing Naomi Doust), to a climate change conference in Edinburgh. The problem is that Greta has given up her fight for the environment because, as she tells everyone, she did what she could but "it's too late'. A hail storm means that a knife-waving Extinction Zero activist, Max ( Sean Bennett), who had planned to grab a hostage but had missed his train, finds his chosen place to shelter from the storm has the ultimate hostage prize – Greta. Alongside the family drama's and the plight of the world, is the ever present Alexa -type speaker in the corner of the room, a spotlit "Gerald", spewing out public service announcements, voiced by the Government Minister Muchousen, (Dennis Bowran) who was a voice-over artist in his days before gaining office. Suzanne Hawkes has moved away from her previous historical 'entertainment with education' that included music and a narrator, and this play bounces along at a good pace, gives you food for thought, and makes you chuckle. I bet she loved writing it too! "A Change of Climate" is at The Two Sisters Arts Centre, Trimley St Mary from 26-30 November 2019.