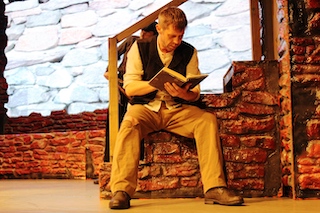 More often used for musicals, singers, dancers and tribute acts, it was interesting to see a new departure for the Spa Pavilion when they welcomed the national tour of Catherine Cookson’s ‘The Cinder Path’ to Felixstowe.

Over two hours, the cast of 15 brought to life one of the writer’s best-known novels, a story of love and betrayal set in Northumberland in the early 20th century. Charlie Macfell (played by James de Lauch Hay) is the son of a cruel farmer who punishes his farmhands by beating them as they crawl on a cinder path. He persudes Charlie to marry the older daughter from the nearby farm, the haughty Victoria Chapman (played by Bethan Amber), even though her younger sister, the flighty Nellie (Eleanor Chaganis) is a more suitable match.

When his father is murdered by his friend Arthur Benton (Glen Richard Townsend), Charlie think no-one else knows. This is not the case and, when they are both conscripted into the army at the start of WW1, their drill sergeant is farmhand Ginger Slater (Nick Cochrane, a familiar face from Coronation Street) and he uses his knowledge of the crime, against them.

This is a play with music and songs, rather than a traditional musical. The standard of singing, both from the leading characters and the other cast members, was very good with some memorable original tunes, by composer Mike Redway. The numerous costumes were excellent and the very effective use of projection, onto a screen incorporated into the set, meant that 25 scene changes over 18 different settings were smoothly accomplished. The screen was also used several times to move the story along, with a sentence or two of explanation.

Being a Catherine Cookson story, the play had its darker side (as there is never an unqualified ‘happy ever after’ to her stories), however it did make the audience laugh too.

It was an unusual play with a touch of pantomime to it. A funny sketch delivered to the audience, community singing, a ‘walkdown’ at the end for applause…  at one point I thought the audience was close to booing the villains!

Performed by a strong professional cast (with great accents and good singing voices) once we adjusted to a slightly unusual format, it was an enjoyable play. And I could happily have listened to the wonderful voice of Bethan Amber singing, all day!