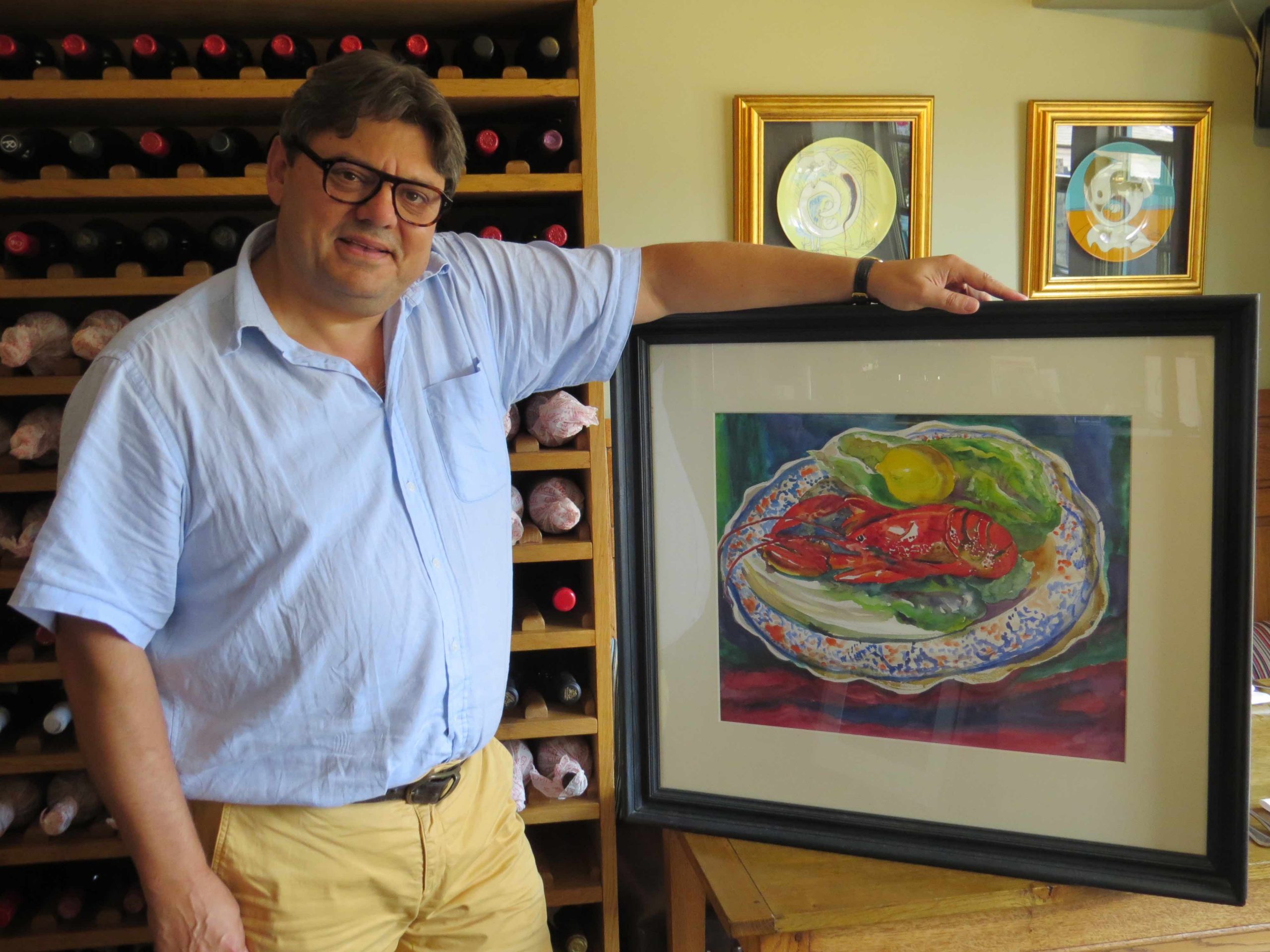 Visitors to Christchurch Mansion or Norwich Castle might well spot one of Suffolk artist Colin Moss’s drawings, paintings or lino-prints, everyday scenes from the 1950’s-1990’s, whether it is a man picking up his dropped chips, workers leaving Ipswich factories, or drinkers in local pubs. At the Imperial War Museum, however, it is Colin’s war work that they value.

Colin, who died in 2005, was born in Cemetery Road, Ipswich but, aged three, following his father’s death in the First World War, his mother moved the family to Plymouth. After training at The Royal College of Art in London, in 1939 Colin was employed by the Ministry for Home Security as a ‘camoufleur’. He was one of a team of artists, who developed camouflage for vital installations like factories, power stations and airfields. The Imperial War Museum in London has a number of Colin’s wartime watercolours including one of Stonebridge Park Power Station near Wembley.

The Collections and Learning Curator for Colchester and Ipswich Museums is Emma Roodhouse, who has curated two exhibitions of Colin’s work,
“We do have about 40 of his pictures in the Ipswich collection and they cover early works right through to brightly coloured nude paintings. Unfortunately, we don’t have any of his wartime paintings in our collection. We have the soldiers Playing Cards but that he painted in the 1970’s. We have a pencil drawing of the guardroom, but we don’t have any that reflect the camouflage work. That would be nice,” she said, slightly wistfully.

Colin in the 1950’s, was part of the “Kitchen-sink” style of British art, artists who focussed on everyday domestic scenes. His work is not on permanent display in Ipswich, but individual pieces of work are used,

“Playing Cards was in a recent exhibition, and we used one of his nudes when we had The Kiss sculpture exhibition here. Colin’s work is brilliant for showing Ipswich people and we have used his picture of the Gaumont cinema audience in the 1950’s showing the audience smoking, with the light from the screen reflected in their faces.”

“Colin, because of the years he spent teaching art, had a style that reflected lots of different genres – he did oils, watercolours, drawing, printmaking …and his style in each medium was different.”

Among Colin’s students was Suffolk artist Maggi Hambling, who has gone on to become an internationally known painter and sculptor, creating the controversial Scallop on Aldeburgh beach, and designing the Suffolk Medal.

‘I was a student at Ipswich School of Art from 1962-64,” Maggi explained. “Colin ran his Life Class in characteristically military fashion, insisting on punctuality and discipline. We were the raw recruits and I admired his style and learnt from him the crucial importance of training hand and eye to work simultaneously. He made us really look at the figure and go for the truth, however unglamorous the models often were. He instilled in us the vital importance of drawing and encouraged a surprising freedom with paint. This combination is apparent in his own work, which is passionate, powerful and full of life.’

Always wearing a jacket and tie, (even when mowing the lawn, according to his family) most people agree Colin was not always an easy person to get on with,

“What I loved about Colin is that he was someone who was fascinated with the world but the image he presented to the world was quite formidable – a bit like Maggi Hambling” explained Andrew Clarke. “She has a suit of armour that she wears but when you get through that, there is this wonderful, interesting, very generous person underneath! The fact that we are still talking about Colin says a lot and I think that for me the variety, quality and range of his work is exceptional.”

“I was twelve and he was sixty when my mother and Colin got married. We lived in a big three-story Edwardian house in Graham Road in Ipswich and he had a big studio and storeroom at the top of the house and our paths didn’t cross very much! He was quite a severe man, but he could also be very funny. It was quite sharp wit, so you didn’t always want to be on the end of his humour. Although he could come across as rather arrogant, he was actually extraordinarily modest about his work.”

“My biggest memory is that I was a huge fan of Brian Eno from Roxy Music and I had a poster of them on my wall. Colin came in and said ‘ Good heavens! Is that Brian Eno?’ And I was so staggered that he knew who it was, then he said “oh, I taught him.’ I was massively impressed and told all my friends.”

“When I go to Granny’s, into his old studio, we go through these massive chests full of his work. It is a real social document of change. In the fifties there would be men at the pub, whereas in the nineties it would be women, having a drink and smoking.”

In the early 1960’s Colin was sponsored by the Ipswich Art Society to go and study in Austria under Oskar Kokoschka, the expressionist painter,

“His colour palette exploded after that,” said Josh. “Last week the task in the studio was to go through his sketchbooks and there are about ten that cover the decades. The early ones are very dark but after Kokoschka, the still life’s, the fish and the fruit, are so different.”

A keen collector is Uğur Vata, from the Galley Restaurant in Woodbridge. He met Colin at an exhibition in Ipswich and Colin often ate in Uğur’s Ipswich restaurant,

“The first picture I bought was “Poor Diet”. Colin went to ‘Snax’, an Ipswich café, almost every morning. There was a large West Indies guy who would sit at the same table eating fry-ups. Colin’s chalk drawing of him is incredible work.”

As a restauranteur Colin’s food paintings are an obvious choice for Uğur,

“I asked him if he could do a painting of a lobster and he said ‘if you provide the lobster and a plate that you like, I will do it.’ When the picture was ready, I paid him the agreed payment, the plate was returned – but he had eaten the lobster!”

After retirement, in the 1980’s, Colin was the art reviewer for the Evening Star and then the East Anglian Daily Times,

“He was a good writer, very concise but very readable,” remembered Arts Editor, Andrew Clarke. “What you got from Colin was a very clear and very honest review. He was perceptive and a really good critic.”

There is no blue plaque in Ipswich to mark where Colin Moss was born, lived or worked, but as one of stars of the Ipswich artworld, perhaps there should be…

Find out more about Colin Moss and his work at www.colinmoss.info

(This article first appeared in ‘Suffolk’ magazine in November 2019)