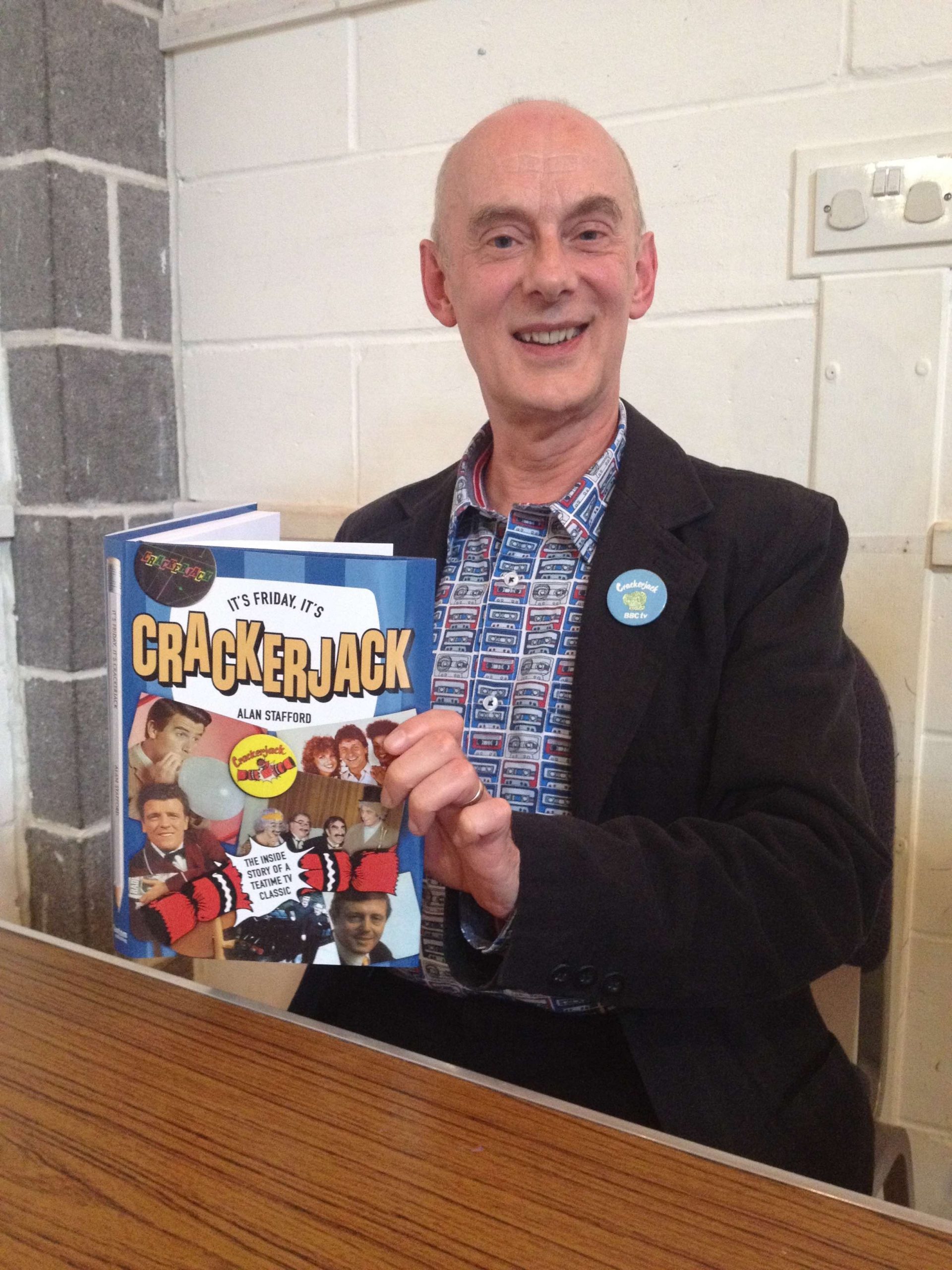 How did a school music teacher become a comedy writer, hearing his ‘gags’ on the radio and winning an award for the best book title? When Alan Stafford from Ipswich tells the story, it sounds quite straight-forward but surely it must be hard work to be funny?

“There are music teachers, much better than me, who spend all their spare time in orchestras, writing music and that kind of thing. I always did other things in my spare time, appearing in am-dram, learning sign language and would have, at one time, liked to have been a sign language interpreter,’” remembered Alan “The big two weekly radio comedies were ‘Week Ending’ for Radio Four and ‘News Huddlines’ on Radio Two, with Roy Hudd. Both had space for topical gags, so I started sending them some. It was something I could fit in with my work as it was so up-to-date. If you lived opposite a newsagent, as I did, and you were writing gags about what was in the newspapers, you could read the paper, get the stories, write the jokes and send them off … and then go to work!”

“I loved the immediacy of it. The News Huddlines was recorded Thursday lunchtime and there was still room in the script for last minute gags. I could write a gag on Thursday morning, send it off and hear it on the radio on Thursday evening! I was also writing short sketches and they were gradually being used too. I loved radio and the fact you could write into the script anything extraordinary. Roy Hudd, June Whitfield and Chris Emmett responded to that – I had them playing prehistoric animals or Bill and Ben!”

“I had no idea this was the system until I had a call inviting me to become a commissioned writer. It meant that I could cut back on my teaching but, unfortunately, I was the last commissioned writer to be taken on as Roy Hudd got a regular job in Coronation Street, which meant he couldn’t commit any longer to Huddlines”

Alan then wrote jokes for other radio and TV shows, and radio comedy plays but, with his love of comedy nostalgia, it was a natural progression for Alan to move into writing documentaries with a comedy theme.

“I had always been interested in Wilson, Keppel and Betty, this unusual variety act, where they dressed in Egyptian clothes, doing a sand dance. They seemed to be an act that everyone remembered, often because people like Morecambe and Wise and Glenda Jackson recreated the act. When I researched it, I found there was very little information and so I started an immense research project on the act.”

That became a radio programme called “Wilson, Keppel and Several Bettys”, and basis for Alan’s first book which he called ‘Too Naked for the Nazis’

“The Diagram Prize is for the oddest book title of the year and I won by public vote. The resulting publicity really did help a second wave of sales of the book.”

Alan’s second book was “It’s Friday, It’s Crackerjack”. This TV programme was an icon of children’s programmes from the 1950’s to the 1980’s.

“The idea was again to cover a long period of light entertainment and I discovered that very little had been written about the programme. It was all about finding as many people as possible who had participated in it over the years, but when I had made the radio documentaries my interviewees were paid a fee. This time I was asking people to talk to me, without payment. No-one minded however, and I travelled around the country…and they would pick me up at the station and take me home, feed me etc”.

Those interviewees were the programme hosts or their families, comedians, musicians, set designers and other backstage people, including the writer Tony Hare, whom Alan already knew and who lived in Suffolk. Why were they all so keen to talk about Crackerjack?

“I think that it was quite a high-quality show, initially broadcast live from the TV Theatre in Shepherds Bush, an old music hall theatre. There was an audience of children, but it was not just a children’s show but for all the family. Pop acts like Tom Jones, The Who and Bucks Fizz also appeared, as it was great exposure for them.”

By coincidence, just as Alan’s book was published, the BBC announced that ‘Crackerjack’ was returning to TV in January 2020, and he found himself doing interviews about the programme for the Radio Times, local radio, and newspapers, and was even invited by the BBC to the recording of the first programme of the new series.

Alan has now made the leap into fiction writing.

“It was a big leap, as I don’t really read much fiction,” he laughed. “So much of my writing has been for the spoken word, but I like writing dialogue and you have that in a novel. I thought I could keep descriptions to a minimum, and write a story that was mainly the characters speaking!”

“The book is about a series like ‘The Confessions’ movies, which were made at a time when you got your naughty thrills from going to see an X film at the cinema. If it was a British film it wouldn’t be too titillating, but would have lots of laughs,” he explained. “My idea for the plot, was that one of the actors had taken his own life in mysterious circumstances and so the final movie was abandoned. Years later someone comes along and wants to finish the movie using the same actors…”

The story is about the reaction of the ageing actors and who is willing to strip off again, why some need more persuading, and about the one who refuses to get involved at all. But will the film be made and the mystery of the death be solved at last?

“I like having a title and I came up with ‘Bonkore’- a combination of Bonk and Encore – which seemed to work well, and people liked.”

Again, the press and media loved the idea of the book, especially local radio presenters around the country, and Alan has done many interviews.

“I think it appealed because of the slightly naughty, fun aspect of the Confessions movies but also the fact that they have had their day and we have moved on.”

What next for Alan Stafford?

“I’ve a few non-fiction ideas but having tackled my first novel I’m quite keen to try another one. Maybe a comedy whodunnit? But I’d never write a conventional detective novel. Simply because I’ve never been a conventional writer.”
/

(This article first appeared in Suffolk Norfolk Life in March 2020)