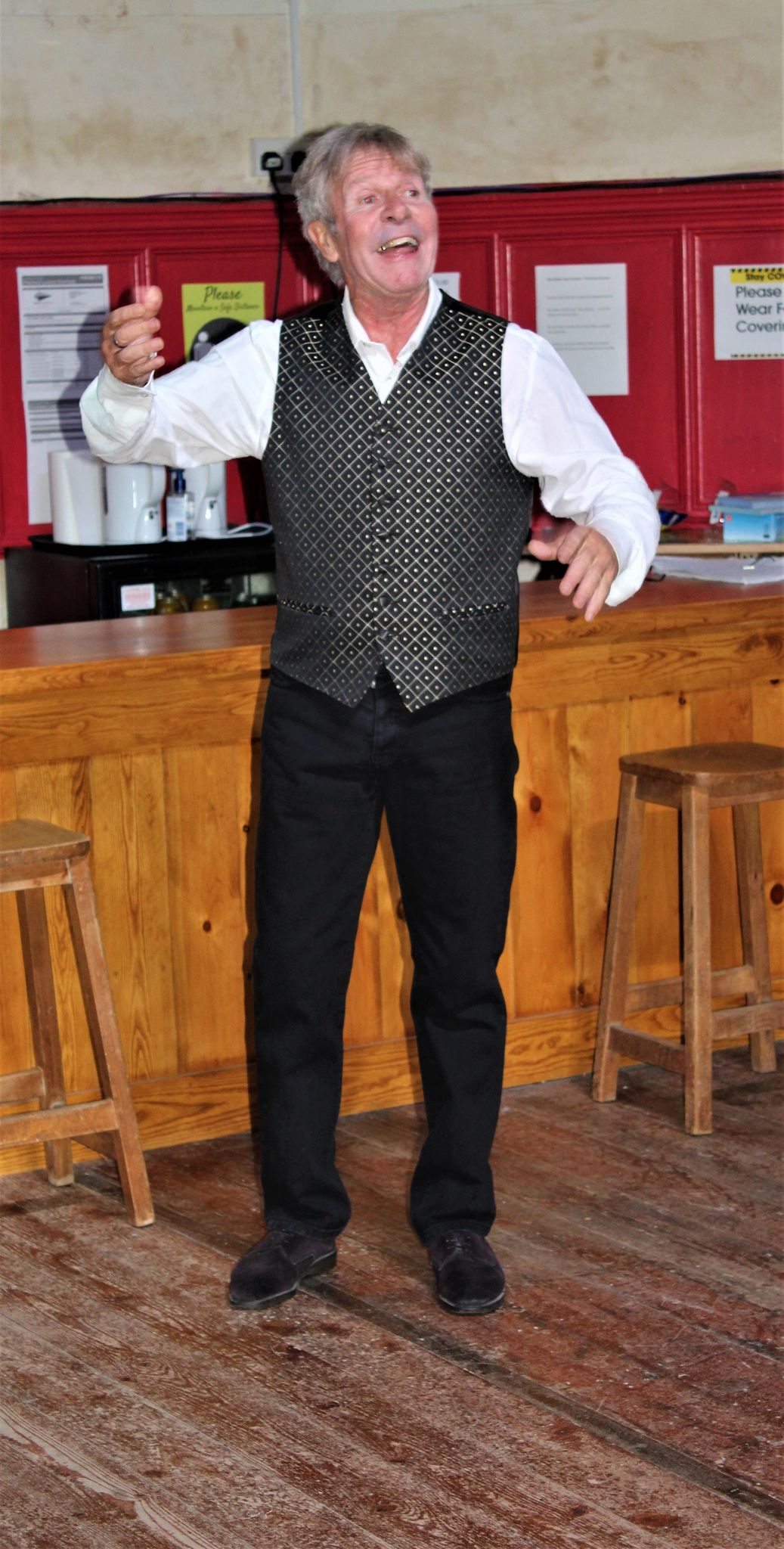 Against all odds the 11th ‘Harry’s Bar…’ night of cabaret and drama has gone ahead, albeit with a socially separated, mask wearing, much reduced audience. Black and White Productions have given careful thought to ensuring audience members feel safe in the current coronavirus situation … and how wonderful it was to be back watching live theatre again

Over the years Felixstowe-based playwright/actor/director Suzanne Hawkes has, in addition to her well-researched local history plays, also presented these very popular evenings of music and acting, with her team of accomplished actors and musicians. Initially presented in The Orwell Hotel, ‘Harry’s Bar’ moved to the Felixstowe Conservative Club, settling now at The Two Sisters Arts Centre, which was created from a redundant church by Suzanne and her team of volunteers.

Last night (Wednesday) was my first visit to Harry and his bar…. and I now realise what a treat I have been missing over the past ten years. Sitting at tables, suitably distanced from each other, the tiny audience (a last minute cancellation had depleted the already small permitted audience) the action was divided into two performance spaces at each end, one being the stage and the other set around the beautifully crafted wooden bar that usually serves audience members their interval drinks.

On the stage, behind a clear plastic screen, were the two vocalists, Paul Stone and Stephanie Stoddart, singing a variety of songs between the different scenes. Yes, some wartime songs, but also everything from Randy Crawford to Bet Midler to Lewis Capaldi.

Harry (played by Paul Pascall) played the genial host welcoming the characters with a beer and a selection of groan-worthy jokes and puns. The theme of previous incarnations of Harry’s Bar has included fictional detectives, Russian spies and visual artists but, in 2020 , it had to be the 80th anniversary of the Battle of Britain. To the bar came Winston Churchill (with that well-known distinctive voice, Phil Cory, hardly needs the cigar, bowler hat, and watch chain to recreate Winston in all his pompous glory), Douglas Bader (Steve Roche), and Air Marshall Dowding (Dennis Bowron), as they prepare for war. In what could be a very male- heavy production, Suzanne Hawkes has provided some good female characters too. The ghost of Clarice Dowding (Heather Prince), Clementine Churchill (Stephanie Stoddart) and the Churchill’s cook, Mrs Landemare (played by Suzanne herself.)

On the stage, projection was used very successfully to compliment the action, especially a film recreating the air battle scene with Bader and young airman, Frank Wright (Thomas Haigh), in their respective spitfire cockpits. A couple of comedy inserts made the audience chuckle, namely a skit on the Home Guard straight from Dad’s Army, with Frazer (Alan Dix), Corporal Jones (Paul Pascall) and Mrs Fox (Suzanne Hawkes), and a company rendition of the old 1960’s hit ‘Snoopy vs The Red Baron, (and yes, there was a Snoopy).

The story was a familiar one, but thoughtfully and aptly retold, with enough local references to Bawdsey, Martlesham airfield and Orford Ness to keep a local audience happy.

The undoubted highlight for me was the music. Two excellent cabaret singers, I could have happily listened to late into the night, accompanied by Bill Stoddart who magically managed to make two keyboards sound like a full band. I am still singing along in my head.

Thank you, Black and White Productions. It was my first ‘Harry Bar’ but won’t be my last.