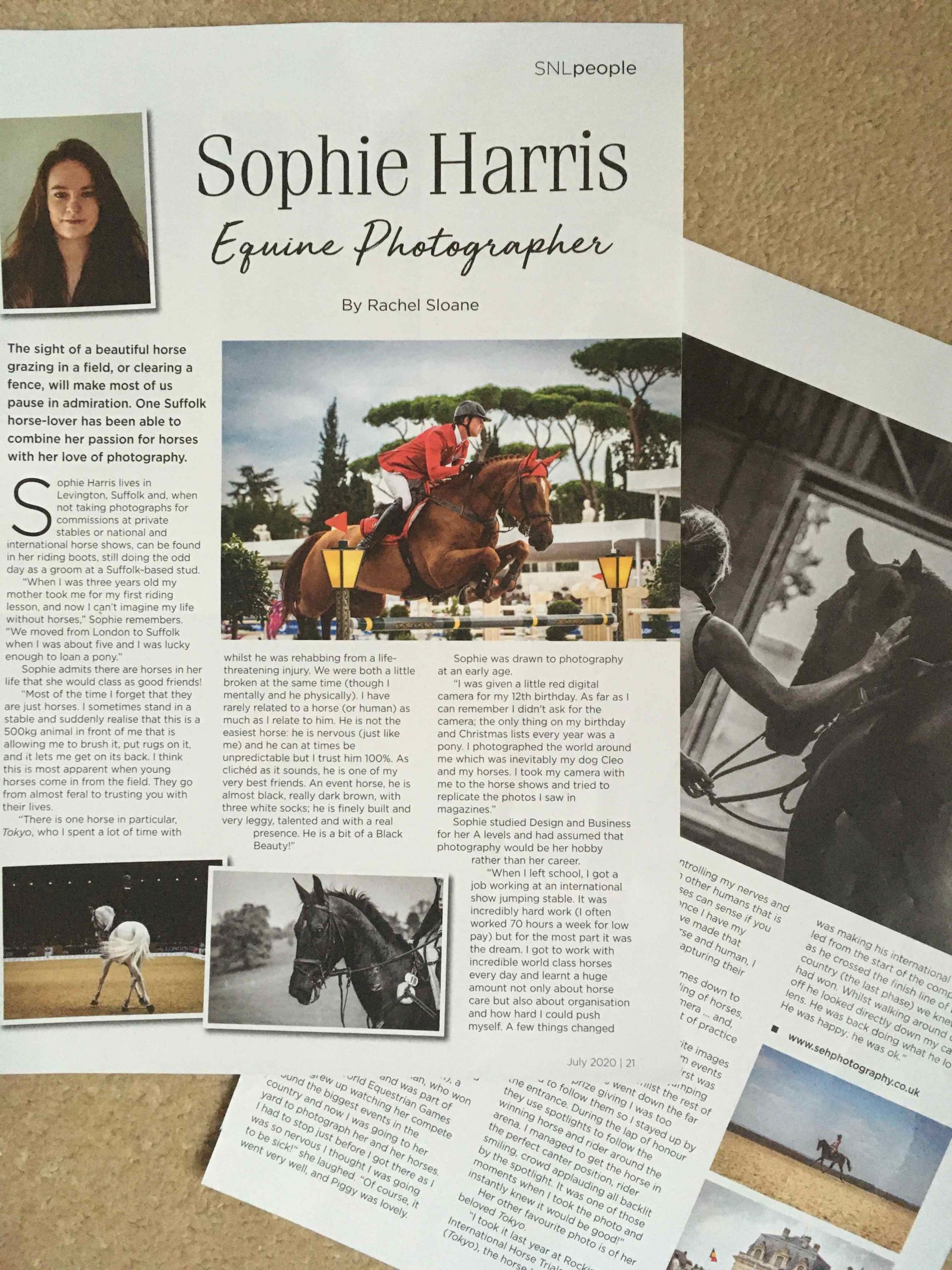 The sight of a beautiful horse grazing in a field, or clearing a fence, will make most of us pause in admiration. One Suffolk horse lover has been able to combine her passion for horses with her love of photography.

Sophie Harris lives in Levington, Suffolk and, when not taking photographs for commissions at private stables or national and international horse shows, can be found in her riding boots, still doing the odd day as a groom at a Suffolk based stud.

“When I was three years old my mother took me for my first riding lesson and now I can’t imagine my life without horses,” Sophie remembers. “We moved from London to Suffolk when I was about five and I was lucky enough to loan a pony.”

Sophie admits there are horses in her life that she would class as good friends!

“Most of the time I forget that they are just horses. I sometimes stand in a stable and suddenly realise that this is a 500kg animal in front of me that is allowing me to brush it, put rugs on it and it lets me get on its back. I think this is most apparent when young horses come in from the field. They go from almost feral to trusting you with their lives.”

“There is one horse in particular, Tokyo, who I spent a lot of time with whilst he was rehabbing from a life-threatening injury. We were both a little broken at the same time (though I mentally and he physically). I have rarely related to a horse (or human) as much as I relate to him. He is not the easiest horse, he is nervous (just like me) and he can at times be unpredictable but I trust him 100%. As clichéd as it sounds, he is one of my very best friends. An event horse, he is almost black, really dark brown, with three white socks, he is finely built and very leggy, talented and with a real presence. He is a bit of a Black Beauty!”

Sophie was drawn to photography at an early age.

“I was given a little red digital camera for my 12th birthday. As far as I can remember I didn’t ask for the camera, the only thing on my birthday and Christmas lists every year was a pony. I photographed the world around me which was inevitably my dog Cleo and my horses. I took my camera with me to the horse shows and tried to replicate the photos I saw in magazines.”

Sophie studied Design and Business for her A levels and had assumed that photography would be her hobby rather than her career.

“When I left school, I got a job working at an international show jumping stable. It was incredibly hard work (I often worked 70 hours a week for low pay) but for the most part it was the dream. I got to work with incredible world class horses every day and learnt a huge amount not only about horse care but also about organisation and how hard I could push myself. A few things changed and I knew it was time to move on, I was devastated but it was the right thing to do. A month later, in August 2017 I set up SEH Photography.”

Sophie takes her photographs at eventing and show jumping, for magazines such as Horse and Hound, and Your Horse, and for Noelle Floyd, an American magazine and website.

“I was very lucky to be in the right place at the right time when I first started. I was in communication with the British Grooms Association as I had been asked to write a quote for their new project about mental health within the equine industry, I happened to say that I was just setting up as photographer and did they want any photos. They said yes. When the campaign was released a week later it went viral within the equine community. It was published in almost all UK horse magazines and even went as far as a magazine in New Zealand. I believe it was shared around 80 thousand times on Facebook. It was my start, a series of images and a campaign I am still very proud to have been a part of to this day.”

As with any business there are many challenges to overcome, protocols to observe and unspoken rules to learn.

“For the national and international events you need press accreditation to be allowed to take the photos and sell images, so I work on commissions from agencies and editors. It is an incredibly saturated and competitive market. Getting paid commissions for the big shows is increasingly challenging. For smaller events I am often commissioned by owners or riders to take bespoke images so I follow them throughout the day, taking photos as they compete.”

“I still can’t believe I am being paid to do this and I am providing the images for the magazines I used to read as a small child! Seeing my images and my name in print remains very rewarding.”

What is the horse event that Sophie enjoys the most?

“My favourite event is The London International Horse Show at Olympia. It is one of the biggest horse shows in the UK, held the week before Christmas. It sees top riders from around the world coming back year after year to compete at this elite level. I attended every year as a spectator from the age of 10, I have now been there as an accredited press photographer for the last three years. It is a stressful week with long hours and tight deadlines but the unique atmosphere makes it incredibly special.”

Sophie loves her work but has special memories of her first commissioned assignment.

“My first ever shoot for Noelle Floyd was for Piggy March (née French), a world class British equestrian, who won Badminton last year and was part of the winning World Equestrian Games team. I grew up watching her compete around the biggest events in the country and now I was going to her yard to photograph her and her horses. I had to stop just before I got there as I was so nervous I thought I was going to be sick!” she laughed. “Of course, it went very well, and Piggy was lovely. For me it is controlling my nerves and connecting with other humans that is challenging! Horses can sense if you are nervous, but once I have my camera out and have made that rapport with the horse and human, I can concentrate on capturing their connection.”

Sophie’s success comes down to her love and understanding of horses, a natural talent with a camera … and, like all photographers, a lot of practice and a touch of luck.

“I have a couple of favourite images both of which are actually from events rather than photoshoots. The first was at my first Olympia, the showjumping class had finished and whilst the rest of the photographers went down the far end for the prize giving I was too scared to follow them so I stayed up by the entrance. During the lap of honour they use spotlights to follow the winning horse and rider around the arena. I managed to get the horse in the perfect canter position, rider smiling, crowd applauding all backlit by the spotlight. It was one of those moments when I took the photo and instantly knew it would be good!”

Her other favourite photo is of her beloved Tokyo.

“I took it last year at Rockingham International Horse Trials. First Lancer (Tokyo), the horse I had helped rehab, was making his international debut. He led from the start of the competition so as he crossed the finish line of the cross country (the last phase) we knew he had won. Whilst walking around cooling off he looked directly down my camera lens, he was back doing what he loved, he was happy, he was ok.”