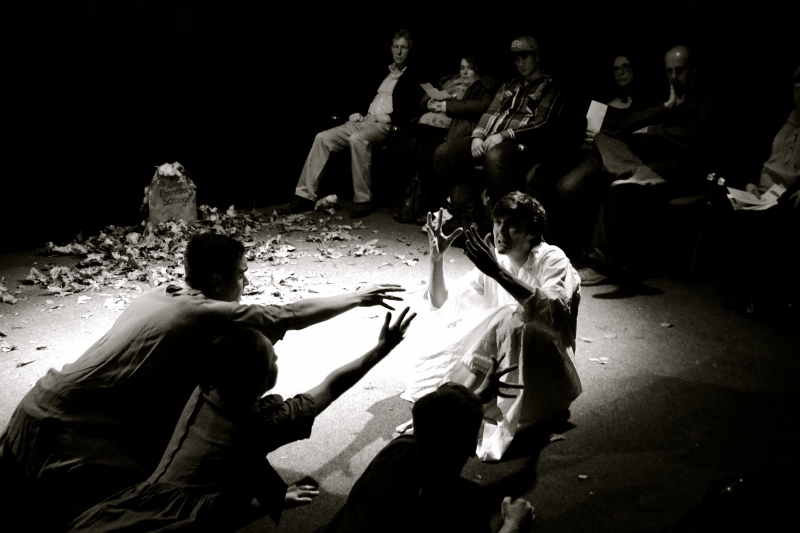 A cast of over 100 dancers and actors need a lot of organisation, and the challenge is even more daunting if there isn’t access to a large theatre or performance space.  These disadvantages were turned into a positive advantage by Suffolk New College Performing Arts students and their performance of Humbug, a retelling of Charles Dickens A Christmas Carol. The imaginative use of various studios and rooms at the college meant that the audience went on a journey with Scrooge as he visited episodes from his life, past, present and future.

The slightly bemused audience arrived in the atrium and "clocked in", choosing one of three categories: Past, Present and Future,  as Dickensian carol singers sung, and top-hatted gentry and bare-foot street urchins welcomed (and sometimes insulted) them. The play then began to a soundtrack of pounding music, industrial noise and a most exciting full-cast performance of choreographed high-energy dance and movement, miming life in a Dickensian factory. (Think of the opening ceremony to the London 2012 Olympics, minus the chimneys!)

With echoing harmonies, the massed cast provided some wonderfully atmospheric singing, from the upper levels of the atrium. Below, the miserly Scrooge and his long-suffering employee. Bob Cratchett, began the most familiar of Dicken’s stories, one that has seen so many interpretations on stage and screen.

Scrooge retired for the night, getting into his curtained four-poster bed from which, as each ghost appears, a different actor emerged as the miser himself. Each Scrooge then followed a ghost, accompanied by a group of audience members, to relive his life, see what has made him the man he is, and what his future will hold unless he mends his ways. As I had chosen "Future" on my clocking-in card I went first to one of the eerily lit studios, and watched with Scrooge as his cackling servants poured over his  worldly goods –  and shivered as the black-clad eight foot tall Ghost of Christmas Future pointed his bony hand to indicate Scrooge’s tombstone.

Seeing first the ghost that is usually revealed last, could have been confusing but when a story is as well-known as this one, it made perfect sense.  I, and the rest of the "Future" audience, accompanied our Scrooge to other rooms to see scenes from his childhood, his apprenticeship years, his first love… and Tiny Tim and the Cratchett family’s Christmas, all revealed in song and dance by the students.

All three sections of the audience were eventually re-united in the college atrium as a reformed Scrooge happily shook all of their hands and excitedly wished them “Merry Christmas" as the rest of the cast once again sung from the upper balcony, overlooking the scene below.

This was a performance of A Christmas Carol with the right costumes, lighting, sound and props…. but will be remembered most for its innovative staging  – and the enthusiasm and talent of over one hundred young performing arts students.

This review also appears on www.onesuffolk.net/previewsandreviews