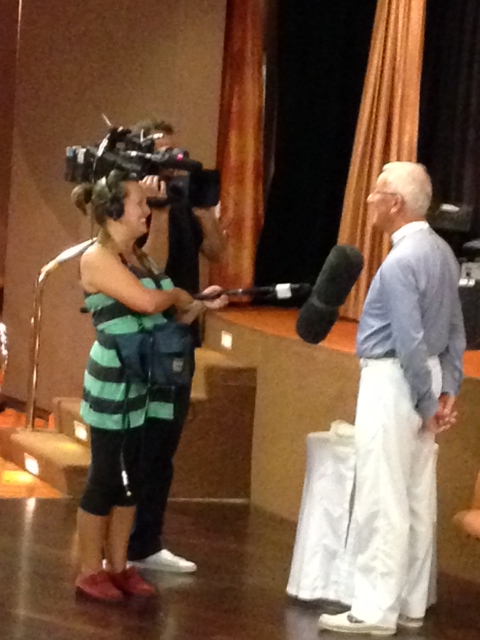 The Cruise: A Life at Sea

Look out for 'The Cruise: A Life at Sea', a six-week series that started on BBC2, Tuesday 9th July 2013, 8.30pm.  'Balmoral' was on her longest-ever 'World Cruise' earlier this year and viewers will find out what life is like for the Chaplain on board, Reverend Colin Still, exploring the globe and discovering his 'parish at sea'. Meet the guests and crew, visit 33 stunning destinations and cross three oceans during this amazing 112-night odyssey!

http://www.bbc.co.uk/programmes/b036ymvm to see Week One and a clip of Week Two’s programmes.

The BBC filmed a four-month round the world cruise on board the Fred. Olsen cruise ship earlier this year for the prime time series on BBC2 – with several media/PR professionals  from Suffolk, doing PR liaison on board. As well as Kevin and Rachel Sloane they included Rachael Jackson from Fred. Olsen Cruise Lines (FOCL), Cathy Shelbourne from Sea Shell Communications and Sue Wilcock from Trebuchet PR, and each spent 3-4 weeks on board, working with the BBC to ensure that filming went smoothly.

Kevin and Rachel joined the ship for the final leg of her journey – from Dubai to the UK, travelling via Oman, Jordan , Egypt and Gibraltar. On sea-going days one of them worked with the BBC to ensure they had what they needed in the way of access to interviewees and locations on the ship,  whilst  making sure no passengers nor crew were filmed who didn't wish to be. The opposite was usually true – some were disappointed they were not featured! On shore days they were free to explore ports and go on excursions to some of the most amazing and historic locations including Petra and Luxor. In Eqypt they went with the TV crew to film Rev Colin Still conduct a short service at the El Alamein war cemetery.

Whether looking for pirates and dolphins, attending Colin's daily services, helping at the country fair held on board or, in Rachel's case, singing with the ship's choir, the opportunity to be involved in such an exciting project was wonderful. They will be watching the TV series with great interest.

This gentle observational series follows the Reverend Colin Still and his parish at sea on the Cruise Liner Balmoral.  Colin (78) is at the heart of the Community on this four month trip around the globe with over two thousand paying guests and  crew.    He’s there to administer to the spiritual needs of the faithful with daily services and celebrations of the Christian Calendar but also for those in anguish and in need, and for those with no faith at all.

The Series will take us to some of the most spectacular locations around the world, and will uncover moving personal stories from the wide variety of life on board the ship,  from love stories to missing loved ones at home.  We’ll be there for the highs and lows of the Parish on board, from the unifying spirit of the choir and their inspirational Choir Mistress,  to the loss of a loved one at sea.   We’ll witness medical evacuations in mid ocean and gentle sightseeing excursions, with Colin helping to shepherd passengers around far flung destinations.

A cast of strong characters will feature throughout the series radiating out from Colin’s day to day life.   We’ll be with passengers celebrating their wedding anniversaries and renewing their vows with trips of their lives, and those determined to enjoy their sunset years in style.   Colin will be with the Entertainers on board, but will also be tackling difficult ethical questions about life and death.

All of life is on board this floating  Community at Sea, from the Captain to the Filipino  Crew, and Colin is on hand for those looking for comfort, advise or just company.

In January 2013 the Cruise Liner Balmoral sets sail on a hundred and twelve day world cruise.  She’s embarking on thirty-three thousand mile voyage and will be stopping at thirty-three ports of call on her trip around the globe.    On board are seventeen hundred passengers and crew and their Chaplain for the journey, the Reverend Colin Still.   After a brief stop in Madeira Captain Victor Stoica soon has a Medical Emergency on his hands as a sick passenger has to be airlifted off the ship in the middle of the Atlantic.  On board Colin and the passengers settle into a routine.  Sue Alderson the energetic Choir Mistress is soon drilling her passenger volunteers for a performance of “The Pirates of Penzance” at the end of the leg in Acapulco.  Bob and Vivien Speding met and fell in love on a previous cruise, but are on a honeymoon with a difference this time.